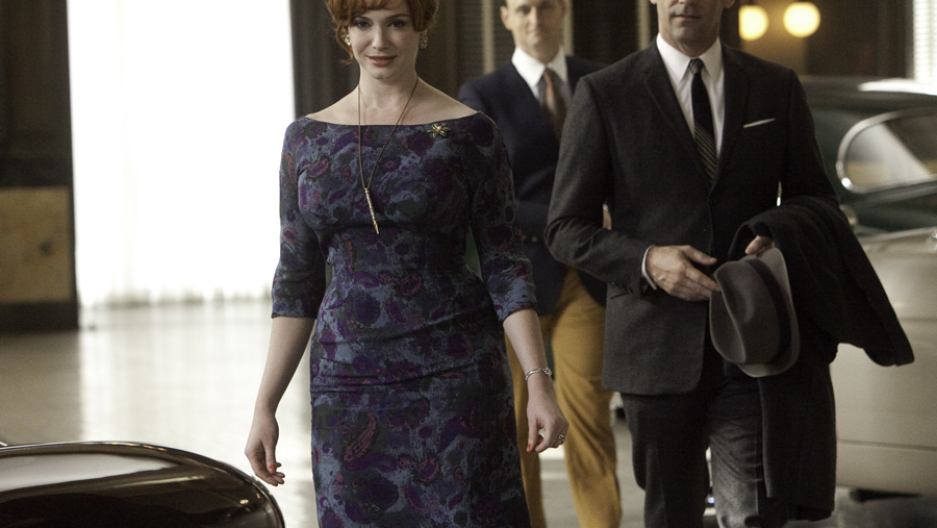 Christina Hendricks as Joan Harris and Jon Hamm as Don Draper in a scene from Mad Men. (Photo courtesy of Jordin Althaus/AMC.)

Hand it to AMC's Mad Men: on its own, it has reshaped the way we think about the 1960s.

Much of that is the work of costume designer Janie Bryant, whose outfits and shifts in style signal the tensions in 1960s America.

Writer Tom Fitzgerald deconstructs the characters' clothes in obsessive detail each week for tomandlorenzo.com and Slate. Fitzgerald said in the early seasons, Bryant dressed the characters as if they were still living in the 1950s to reflect how unprepared they were for the current decade.

This season, Fitzgerald noticed the clothes reflecting arcs in the plotline. The rose motifs on the dresses worn by office manager Joan got smaller and smaller as her marriage soured. As Peggy the copywriter rises in power in the office, she’s often seen in a golden yellow.

"Whenever she wears that in the office, it usually signals something good is happening in her career," Fitzgerald said.

As the show approaches 1968, the counterculture is poised to arrive on the scene in force, but Fitzgerald thinks the show will avoid excesses, instead reflecting the reality that some people are more able to change than others.

"Don is going to end the '60s in a skinny tie and a skinny lapel jacket," Fitzgerald said. "He's not going to grow sideburns or start wearing Nehru jackets."