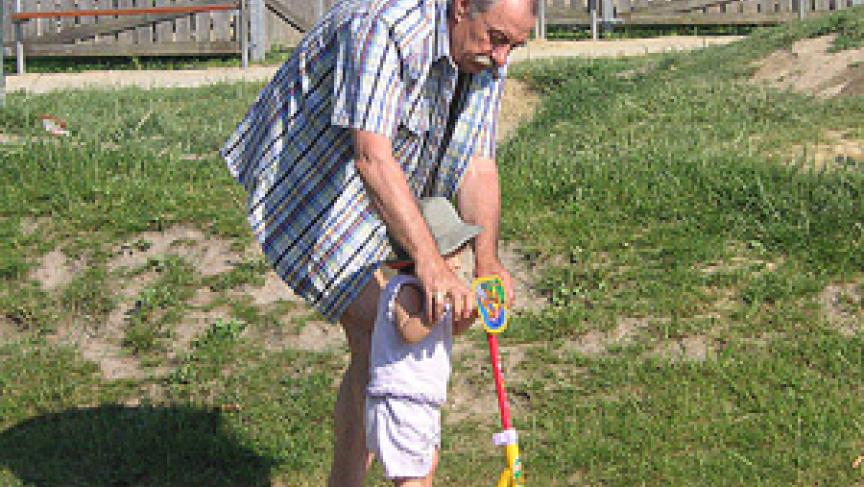 A grandfather teaching his little granddaughter how to ride a kick scooter. (Photo: Wikipedia)

Share
How long any of us will live is dictated, in part, by our family history. If you inherit good genes, you have a better shot at reaching old age. No surprise there. But a new study conducted in the Philippines adds an interesting twist. It turns out your life expectancy may be affected by how old your grandfather was when your father was born. The phenomenon has to do with special structures — called telomeres — that sit at the ends our chromosomes. Telomeres are often compared to the plastic tips at the ends of a shoelace. "Those plastic tips keep the shoelace from fraying and allow it to function properly," says Northwestern University anthropologist Dan Eisenberg. In a similar way, he explains, telomeres protect our strands of DNA. The problem is, as we age, those telomeres get shorter. "If you look at the telomere length from… an older person versus a younger person, we see that the older person will have shorter telomeres," he says. In that way, short telomeres are a sign of old age. They may also cause some of the health problems related to aging. When telomeres get too short, cells can't divide. That means being born with longer telomeres might slow your aging and extend your lifespan. But what determines how long those protective tips are at birth? It turns out that children born to older fathers tend to have longer telomeres. That's because telomeres in sperm don't get shorter as a man ages; in fact, they get longer. So an older father will pass on those longer telomeres. Eisenberg and his colleagues wondered if this effect went beyond a single generation. For their new study, they collected blood samples from young men and women taking part in a large health study in the Philippines. They wanted to see if those who had older grandfathers also had longer telomeres. Indeed, they found this transgenerational effect. "Having an older paternal grandfather [causes] you to have longer telomere lengths," says Eisenberg. "And those longer telomere lengths probably help you to have a longer and healthier life." Since the participants in this study were young, it's too soon to know if those with longer telomeres will actually lead longer, healthier lives. But it's an intriguing possibility. Northwestern University anthropologist Christopher Kuzawa, a co-author on the new paper (published in the Proceedings of the National Academy of Sciences), says the benefits of inheriting longer telomeres from older grandfathers may extend beyond the individual and into entire populations. After all, he says, people in many countries are having children at older ages, and their offspring are living longer. Could inheriting longer telomeres be a factor? "We wonder might that actually contribute to the fact that we see longer lifespans now?" he says. "It's definitely a speculation, but I think it's a possibility." Kuzawa does not advise men to wait as long as possible before having children. There are also negative effects of having children later in life, and it's not clear if the benefits outweigh the risks. Borge Nordestgaard, a scientist at the University of Copenhagen, says the new study from the Philippines is surprising and exciting. But he would like to see scientists replicate it in other populations — "for example, in the U.S. or in Europe," he says. Nordestgaard says the role of telomeres in aging is an active area of research, so it probably won't be long before other scientists follow up on the new study.