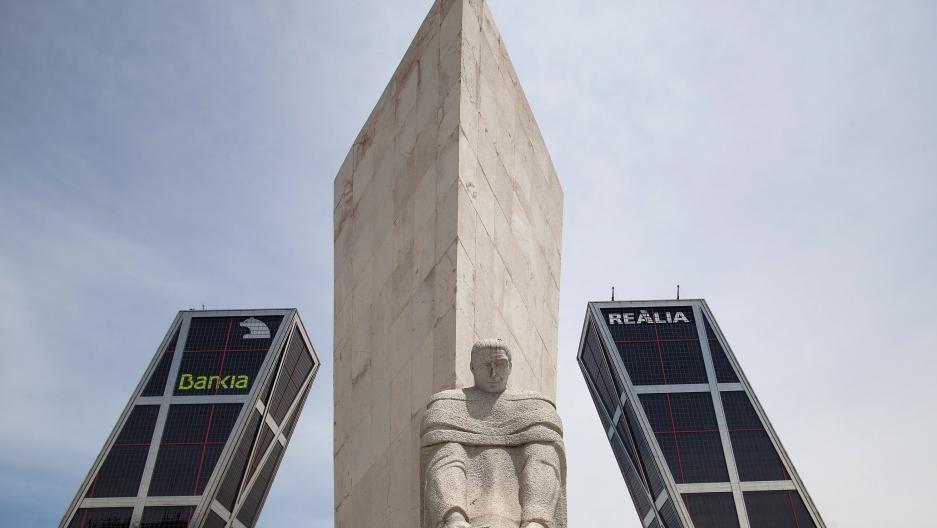 BRUSSELS, Belgium –  As Band-Aids go, the 100 billion euro "bailout lite" for Spain looks pretty impressive. But it could be less than a week before the euro zone is confronted with its next existential threat.

Expect markets to drop even more next Monday, if Sunday's election in Greece leads to a far-left victory that opens the door for a euro departure.

Conservative leader Antonis Samaras said the Spanish deal showed Europeans could stick together and made it imperative that Greece avoids isolation.

His rival from the far-left Syriza party countered that the rescue of Spain's banks gave credence for his demand that Greece tear up its agreement with the EU to implement painful austerity measures, even at the risk of loosing its bailout funding and being kicked out of the euro zone.

“Developments in Spain confirm the position we've adopted from the beginning – that the crisis is a pan-European problem and the way it has been handled so far has been socially catastrophic and completely ineffectual,” Syriza leader Alexis Tsipras said Sunday.

More from GlobalPost: The euro zone gets a report card

Syriza has been riding high in opinion polls, prompting fears of a messy Greek euro zone withdrawal with disastrous knock-on effects on other vulnerable euro countries and the wider world economy.

European Union officials indicated Monday that the size of the aid available for Spain's banks — more than double the International Monetary Fund's estimate of their current needs — is to make sure they can cope with the impact of a Greek exit.

Spain is the now fourth euro zone nation to appeal for international assistance since the debt crisis erupted three years ago. But its bailout is fundamentally different from the 247 billion euros given to Greece or smaller amounts handed out to Ireland and Portugal.

Spain's money is exclusively to support the banking sector, rather than to keep government finances afloat.

That means Spain escapes the humiliation of handing over control of economic policy to the "men in black" from the EU and International Monetary Fund, who are blamed in Greece for imposing austerity.

According to a leaked message carried on the front page of Spain's El Mundo newspaper Monday, Prime Minister Mariano Rajoy ordered his finance minister to reject conditions that would have led to Spain surrendering control over its economy.

"Resist, we are the fourth largest power in Europe. Spain is not Uganda," Rajoy reportedly texted minister Luis de Guindos who negotiating the bailout terms in a teleconference with other euro zone ministers.

According to the paper, which generally supports Spain's conservative government, de Guindos then told Finland, the Netherlands and others who were demanding greater international supervision of Spanish finances: "If you want to force Spain into a bailout get 500 billion euros ready, plus another 700 billion for Italy which will need rescuing later."

In a press conference after the deal was clinched on Saturday evening, de Guindos insisted Spain was a special case. "This is not a bailout," he told reporters in Madrid. "This is a loan given in very favorable conditions."Journalists dubbed the deal a "Spailout."

Over the next few days, Spanish and EU officials will be working out the exact terms of those conditions, including the degree of outside supervision and the rates at which Spain will have to pay back the money.

Irish and Portuguese politicians are complaining about Spain's special deal, but EU officials insisted IMF, EU and European Central Bank officials will be overseeing a "rigorous" reform of Spain's banks, whose loose lending during a mid-2000s housing boom played a major role in dragging the country into its current mess.

"In exchange for this European solidarity, there will have to be a serious restructuring of the banking sector," Amadeu Altafaj Tardio, the EU's economics spokesman said Monday. "This will put the banks at the service of the real, productive Spanish economy and not at the service of speculation as it was in the past."

The EU intervention heads off the immediate threat of Spain's banking black hole undermining the country's finances. It was welcomed by markets, although by early afternoon in Europe some of the early euphoria was beginning to wear thin.

"In the current context this is a good decision," says Carsten Brzeski, senior economist at ING bank. "It shows a more pragmatic approach from the European leaders and takes Spain out of the frontline ahead of the Greek election, but it does not solve the problems of the Spanish economy. The falling house prices are still there, the unemployment is still there."

Part of the problem is that the money Spain ends up taking up from the 100 billion euro loan package will be added to its already fast growing national debt. If the bank restructuring is handled skillfully, however, with minimal costs to taxpayers some economists believe the impact on sovereign debt could be limited.

"In the US, government-led bank rescues typically did not result in a loss to the government but rather in a profit," blogged Guntram Wolff, deputy director of the economic think tank Bruegel. "If the Spanish government were to act in the same way, then the increased debt level would be off-set by an increase in valuable assets."

The fact that Germany went along with the bailout lite, is being interpreted by some potentially significant sign that Chancellor Angela Merkel is prepared to show more flexibility as the EU prepares to take key decisions on longer-term moves to stabilize the euro zone at a June 28-29 summit.