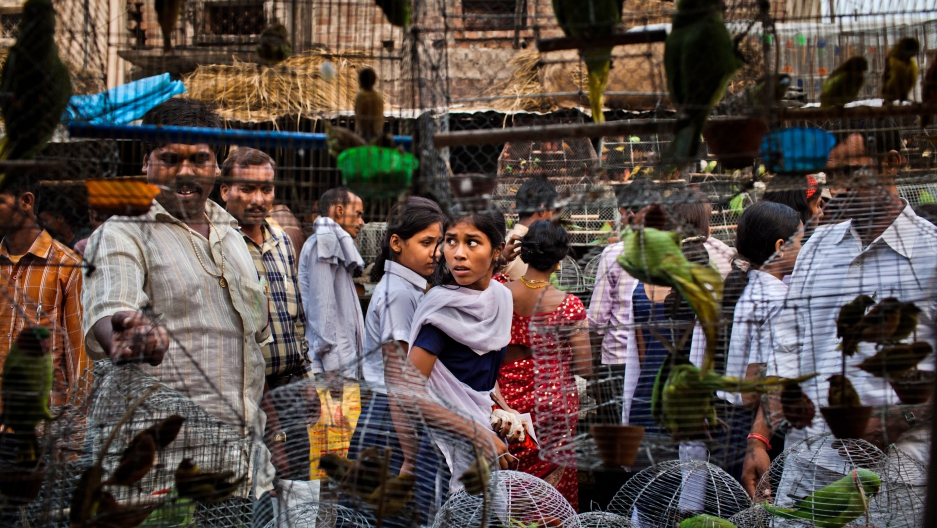 People walk past cages with birds for sale at a market during the Sonepur Mela Sonepur near Patna, India. Standard and Poor indicated that India may lose its investment-grade rating due to slow growth rates and political deadlocks concerning economic policy.
Credit: Daniel Berehulak
Share

India's slow GDP growth and its political hurdles to economic policymaking are two key reasons that India risks losing its investment-grade rating, according to a new report from Standard & Poor's.

Here's the full release via S&P:

NEW YORK (Standard & Poor's) June 11, 2012 — Slowing GDP growth and political roadblocks to economic policymaking are just some of the factors pushing up the risk that India (unsolicited BBB-/Negative/A-3) could lose its investment-grade rating. That's according to a recently released report by Standard & Poor's Ratings Services, titled "Will India Be The First BRIC Fallen Angel?"

The report states that the Indian government's reaction to potentially slower growth and greater vulnerability to economic shocks could largely determine whether the country can maintain an investment-grade rating or become the first "fallen angel" among the BRIC nations (which also comprise Brazil, Russia, and China). The 'BBB-' long-term sovereign credit rating on India is currently one notch above speculative grade.

Standard & Poor's revised the rating outlook to negative from stable in April 2012 because of India's lower GDP growth prospects and the risk that its external liquidity and fiscal flexibility may erode. The negative outlook also reflects the risk that Indian authorities may be unable to react to economic shocks quickly and decisively enough to maintain the country's current creditworthiness.

"The combination of a weakening political context for further reform, along with economic deceleration, raises the risk that the government may take modest steps backward away from economic liberalization in the event of unexpected economic shocks. Such potential backward steps could reverse India's liberalization of the external sector and the financial sector," said Mr. Mukherji.

The report examines the forecasts for economic growth, and the possible effects on business confidence and the government's commitment to economic reform.

The report also suggests that despite recent problems, the Indian economy remains in much better shape to withstand this period of heightened global uncertainty than it was in the early 1990s, when it suffered a balance-of-payments crisis.

Business Insider: China Announces How It Would Go to War With the US Fleet

Business Insider: This Is Why You'll Always Be Stuck in a Job You Hate

Business Insider: A Terrifying Glimpse Into the Mind of a Serial Killer