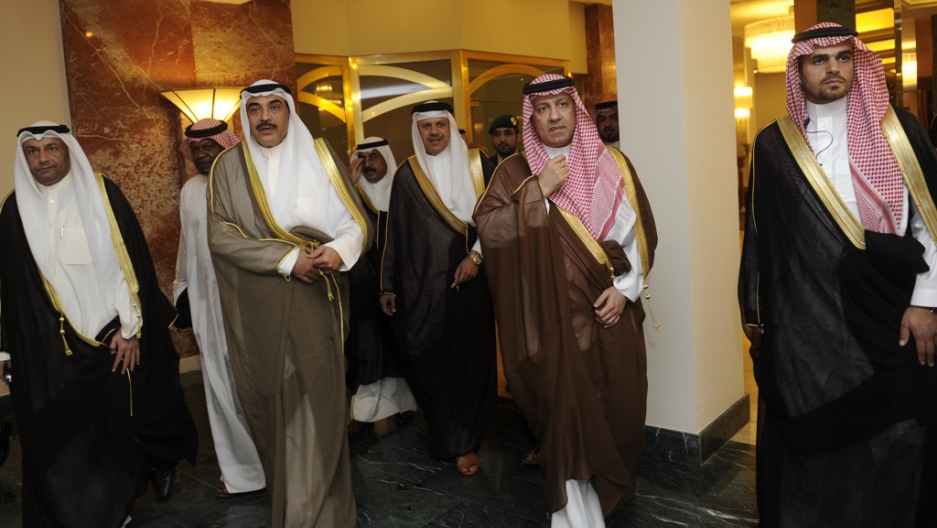 Gulf Cooperation Council officials arrive at the conference hall where a ministerial meeting was held on June 5, 2012 in the Saudi Red Sea port city of Jeddah. Saudi Arabia's Foreign Minister Prince Saud al-Faisal urged Gulf states to mobilize their resources in response to uprising around the region.
Share

DOHA, Qatar — With much of the Arab world in a do-or-die stampede toward greater democracy, Saudi Arabia is looking to consolidate the old way of doing things.

Riyadh is pushing a bold agenda to strengthen the long-standing union between its fellow Gulf monarchies, apparently to prevent the Arab world’s revolutionary fervor from spreading.

The move was met with skepticism and outright hostility from neighboring states, which are reluctant to cede their growing autonomy.

“Since last year, Saudi Arabia has presented itself as the leader of the counter-revolution in the region,” said Marc Valeri of the Institute of Arab and Islamic Studies at the University of Exeter. “The Saudis were not happy with what happened in Egypt, in Libya, in Tunisia, and in Bahrain, obviously. This push for integration was clearly linked to what happened during the Arab Spring.”

At a May summit, Saudi’s King Abdullah proposed creating a closer political, economic and military union with the five other Arab monarchies that comprise the Gulf Cooperation Council. The details of the failed agreement were never made public. Instead, the states proposed to meet again in December.

Like six siblings with different personalities and interests, the GCC countries — Saudi Arabia, Bahrain, Kuwait, Qatar, Oman and the United Arab Emirates — are prone to infighting and power struggles. But the Saudis are banking on a shared mistrust of countries outside the Gulf — in this case, changing countries like Egypt and Tunisia — to bring the family closer together.

“The call for unification within GCC countries signals a resumption of a bipolar region, featuring the rise of post-authoritarian states on the one hand, and the solidification of conservative regimes on the other,” said Abdullah Al-Arian, an assistant professor at Wayne State University.

There has been a misperception that the move toward a closer union was intended primarily as a warning from the Sunni-dominated Saudi Arabia to the Shiite-majority Iran.

“There is an element of Iran taking advantage of a deteriorating situation in Bahrain to expand its influence and create even greater headaches for the Gulf rulers. But as the Bahrain Commission report clearly stated, there is no evidence so far of direct and clear Iranian interference. So the fact that the Bahrain uprisings have continued points toward internal dynamics about which the Gulf rulers have to also worry about,” said Christian Koch, director of the Gulf Research Center Foundation.

More from GlobalPost: The Gulf is raising a bigger army. But for what?

Koch doesn't know whether a closer union would actually overcome those hurdles.

“I believe the GCC states are evaluating the domestic political situation differently, and given those different perspectives, they are not all on the same page as far as further unity is concerned,” he said.

“Kuwait was bullied into sending Peninsula Shield forces to Bahrain and their entire government fell because of divisions within parliament that were instigated by the disagreement,” said Justin Gengler of Qatar University.

Recognizing that a broader partnership with Saudi Arabia would lead to more of this kind of interference, Kuwait, Oman, the UAE and Qatar have no interest in ceding regional and international influence to the kingdom.

GCC powerhouse Qatar is particularly is wary of any broader cooperation.

“The Qatari reaction and the entire GCC reaction would be one of fear that you’re next,” Gengler said. “Maybe not in the immediate sense but the precedent of a Saudi takeover of Bahrain means once you sort of run out of economic sources to defend yourself like Bahrain has, you’re fair game for the regional power to eat away at your political independence.”

Qatar, in particular, is wary of outsized Saudi influence on its affairs.

“Qatar has an independent foreign policy and an independent economic influence all over the world, particularly in Europe and Asia. They don’t want Saudi Arabia to interfere,” Valeri said.

The United Arab Emirates has similarly clashed with Riyadh over past efforts to mold the GCC in the image of international bodies like the European Union.

“The UAE withdrew from the discussions about common currency two years ago and that’s why,” he said. “They wanted the central bank to be based in the UAE and Saudi Arabia didn’t. There’s an economic competition and a competition for influence.”

The individual countries also have long-held geopolitical relationships with the United States, which diverged sharply from Saudi Arabia in response to the Arab Spring uprisings. Qatar, in particular, might find it more advantageous to rely on the West than its powerful next-door neighbor.

“Qatar may become less assertive and more willing to be dependent on the US following a Saudi-Bahraini union,” said Mark Katz of George Mason University. “Being wealthy but weak is not a long-term recipe for being influential internationally.”

The larger issue is whether these increasingly independent countries will become even less reliant on one unified body going forward.

“The Saudis certainly hoped to at least establish a degree of consensus that the GCC states should work together on common goals,” Koch said. “It is just that the concept of union is more complex than was initially thought and as the committee took up its work of examining the issues, more fundamental questions came to the forefront about exactly what the concrete idea behind the proposal was.”

Koch concluded that the GCC members realized that greater unity meant either domination by Saudi Arabia or surrendering considerable sovereignty to the GCC, which the states weren’t willing to accept.

“There was no other way but to postpone the issue,” he said. “As a result, I have doubts that the concept will gain more traction by the end of the year summit meeting.”