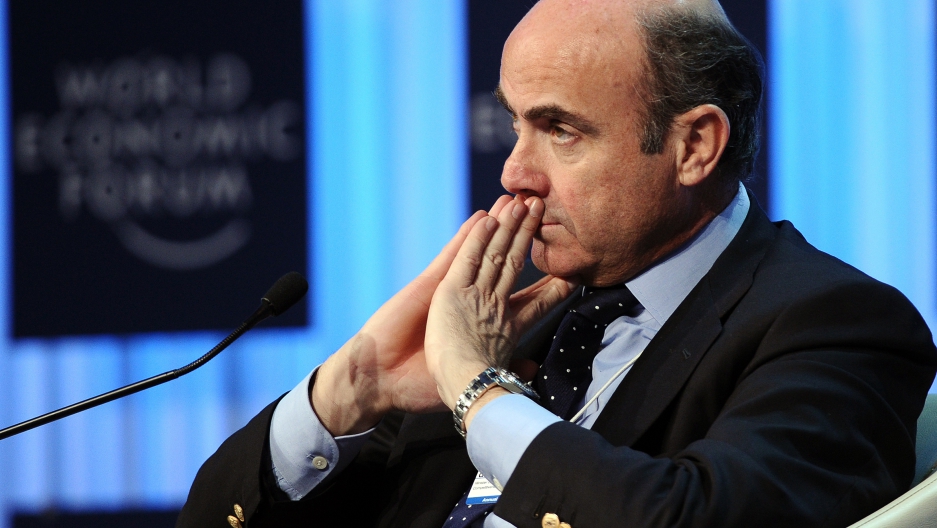 Spanish Minister of Economic Affairs Luis de Guindos Jurado at a debate on the future of the Eurozone at the World Economic Forum at Davos on Jan. 27, 2012.
Credit: VINCENZO PINTO
Share

Spain is asking for a bank bailout from the eurozone, the Associated Press reported on Saturday.

According to the New York Times, Spain has already agreed to accept a European offer to bailout its debt ridden financial sector. Ministers reportedly offered Spain up to 100 billion euros, or $125 billion, but it is unclear how much the ailing nation will accept.

Economy Minister Luis de Guindos said bailout funds are strictly for the banking sector and unlike Greece, will not come with austerity measures for Spain's citizens, the AP wrote.

Guindos did not specify the amount Spain requested, saying that he would wait until independent audits conclude.

The New York Times reported the move comes amid pleas from world leaders to stabilize the banks before next week's Greek elections.

Spain is now the fourth and largest country seeking financial assistance as a consequence of the European debt crisis.

According to the BBC, Guindos emphasized "this is not a rescue," saying there would be conditions attached for the banks receiving the loans, but no "micro-economic conditions" alluding to the strict austerity measures enforced in the case of Greece, Ireland and Portugal.

"We hope that as a result of these injections [of capital] families and companies will have more solvent banks which are able to offer them credit, which they are not able to do at the moment," he said.