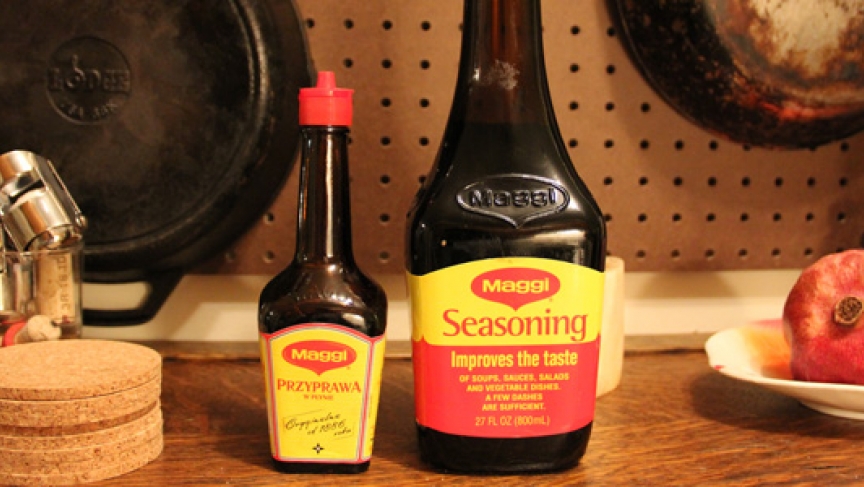 When it comes to home cooking, immigrants from countries as far apart as Nigeria, the Philippines and Poland share a common ingredient. They all use a condiment called Maggi seasoning. And they all think it belongs to them.

Maggi is a salty brown liquid that’s a little like soy sauce, but more intense. It comes in a little amber bottle, but it’s also available in the form of cubes. It’s an essential ingredient in Divine Muragijimana’s kitchen. She’s from Burundi, but now lives in Brooklyn. Today, she’s frying onions and chopping. She’s making a dish called ugali, a thick pasty starch made with cassava flour, which she serves with fish and a fragrant sauce. And Maggi’s a key part of the mix.

“It makes a difference between a food becoming African, and not African,” according to Divine. When she first moved to America, Divine lived in West Virginia, and she says it was impossible to make a proper Burundian meal. “There were no Maggi cubes and the cilantro they used here was crap,” she said.

Years later, she finally found Maggi in a Cincinnati market. She says the first meal that she made was beans and rice, with a little meat. “That was the first dish cause that’s such an African, at least Burundian meal. It reminds me so much of home,” she said. 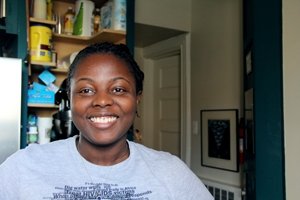 Divine’s meal today is coming together. There’s a bowl of thick ugali, and the simmering sauce with tomatoes and cilantro. You can just make out the aroma of Maggi wafting from the skillet.

When I tell her it doesn’t come from Africa, she’s kind of disappointed. “My dreams are shattered,” she said. She can’t quite believe it’s true. “Now I really have to wonder, how did African food taste without Maggi? How did it taste before Maggi arrived?” she said, laughing.

Divine’s not the only one who lays claim to Maggi. Just a subway ride away from her house is the Polish G.I. Delicatessen in Manhattan, a small store packed with Polish food. On the shelves, next to packets of powdered vanilla, tins of herring, and jars of Polish preserves, owner Grace Iwuc stocks Maggi seasoning. “Polish people, they buy this a lot,” Grace said. “You have to use always.” Maggi is a staple in Polish cooking, but you’ll also find the distinctive yellow-and-red label in Chinese groceries, Mexican markets and German specialty stores.

Maria Christina lives in New York, but grew up near a Maggi factory in Austria. She was surprised when I told her that Maggi is popular in other countries, like the Philippines, where I’m from.Of course, Maggi seasoning does actually come from somewhere. It was invented in Switzerland in 1886 by a Swiss-German named Julius Maggi. One of the first industrial, mass-produced foods, Maggi was intended to make soups and stews taste heartier for factory workers who didn’t have much money for meat.

“Really, it has a Filipino taste?” When I told her that I always thought it came from the Philippines, she said she always thought it had a very Austrian-German taste. “It’s creepy. It’s really creepy,” she said. “I don’t know how something like this can happen.”

At Maharlika, a Filipino restaurant in Manhattan’s East Village, Maggi gets a place at the table, alongside bottles of spicy vinegar. Maharlika plays on Maggi’s kitschy, cult status back in the Philippines. But people here have an idea why Maggi seems so ubiquitous. It has to do with “umami.”

“It’s a flavor profile, but it’s also a sensation,” said Topher Chung, a server at Maharlika. Umami is often thought of as the fifth taste — after sweet, salty, sour and bitter. It was first described in Japan in 1909, and it comes from foods that contain a lot of glutamic acid — like ripe tomatoes, aged cheese and MSG, which Maggi has a lot of.

“It’s supposed to evoke goodness, the most raw, natural state of goodness in food,” Topher said. Maggi has enough of its own flavor so you know it when you taste it, but it’s Maggi’s umami that makes food taste more Polish, more Burundian, more Mexican or more Filipino. And that’s probably why immigrants from those countries and many others have come to think of Maggi seasoning as the flavor of home.

Aurora Almendral’s story was produced with the help of Feet in Two Worlds, which brings the work of immigrant journalists to public radio. It’s a project of the Center for New York City Affairs at The New School.