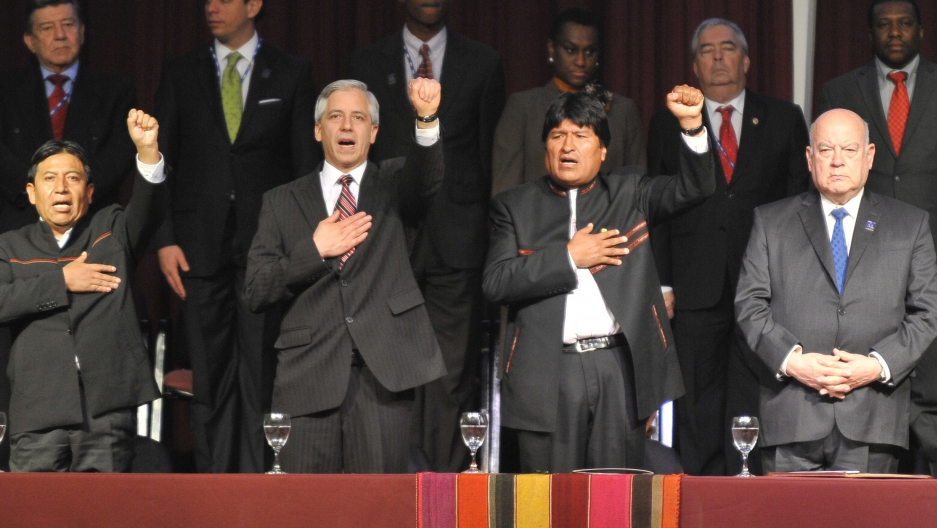 LIMA, Peru — US influence in Latin America is again under attack.

This time, the Inter-American Commission on Human Rights, which is backed and funded by the United States, is under pressure from regional governments angry at what they say is US meddling in their internal affairs.

The attacks have been led by Venezuela President Hugo Chavez and his Ecuadorean and Bolivian counterparts, Rafael Correa and Evo Morales. The three are leading members of Chavez’s leftist “Bolivarian” alliance of the Americas, known as ALBA.

The governments of Chavez and Correa in particular have come under intense scrutiny from the commission for either perpetrating or permitting serious human rights abuses.

They claim the system, and its parent body, the Organization of American States (OAS), are tools of US domination and fail to address Latin America’s real needs.

At the OAS’ 42nd assembly in Cochabamba, Bolivia this week, Correa and Chavez won an agreement to propose specific reforms to the Inter-American Commission and its sister body, the region's human rights court, within six months.

The move is the latest sign of waning US influence south of the Rio Grande. Although relationships have improved since US President Barack Obama entered the White House, Latin America’s leftist, popularly-elected leaders have flaunted their autonomy from Washington on a range of issues, from the war in Iraq to trade policy. Now, a dispute over how to secure citizen's human rights is pitting Latin leaders against one of the hemisphere’s most highly-regarded US-backed organizations.

“The OAS and the Inter-American system have been working illegally in the interests of the foreign policy of the United States,” Correa told Bolivian paper La Razon shortly after the assembly concluded on Tuesday.

Some human rights campaigners are appalled, fearing the dismantling of the system that began with the American Declaration of the Rights and Duties of Man in 1949.

From the Rights blog: Will the OAS disintegrate?

That makes it the world’s first such human rights protocol, predating the UN’s Universal Declaration of Human Rights by six months.

Jose-Miguel Vivanco, Americas director for Human Rights Watch, told GlobalPost he feared a compromise deal aimed at preventing a mass withdrawal from the Commission would ultimately undermine the body’s goal of preventing abuses.

Meanwhile, Chavez, speaking from Caracas, added to the pressure: “What is the OAS for and what is the IACHR for? We are going to create our own mechanisms [for Latin American governments to address human rights and other regional issues].”

That process has already started with the creation in 2010 of the Community of Latin American and Caribbean States (CELAC), which pointedly excluded the US and Canada.

Correa has been infuriated by the human rights commission's defense of journalists he sued for criminal defamation, winning a $42 million libel award and 3-year jail term for a columnist and the owners of El Universo, the country’s second best-selling newspaper.

The president subsequently pardoned the trio. But not before the commission stepped into the row, warning the president that jailing journalists for their writings violated the American Convention on Human Rights.

Meanwhile, the Chavez administration has been repeatedly called out by the commission for failing to guarantee its citizens’ rights in a wide range of issues, including abusive prison conditions, the undermining of the independence of the judiciary and authoritarian use of state powers.

Although the calls for a shake-up of the Inter-American system have been driven by the Venezuela-led “Bolivarian” bloc, other Latin American countries are also known to be sympathetic.

Brazil broke off relations with the commission a year ago after it recommended suspending the construction of a $17 billion dam because it would flood the lands of 5,000 indigenous people.

And the administration of Peru President Ollanta Humala is energetically fighting an investigation by the Inter-American Court of Human Rights into the alleged extra-judicial killings of three Marxist guerrillas.

The slayings came after commandos rescued 71 hostages from a four-month ordeal at the hands of the armed group in the official residence of the Japanese ambassador in Lima.

Although fiercely opposed to the changes, US reaction has been muted. In fact, Washington is a member and leading funder of the OAS but, vexing its southern neighbors, has never signed or ratified the American Convention on Human Rights itself and remains outside the rights commission’s jurisdiction.

Addressing the assembly, US Assistant Secretary of State Roberta Jacobson insisted that the “autonomy and independence” of the commission must be preserved.

“When citizens or media outlets speak out, dissent, or criticize,” they strengthen democracy, she added.

Vivanco, of Human Rights Watch, was more direct, claiming that the Chavez administration and its allies are simply seeking to avoid scrutiny of serious human rights abuses.

“The real reason why they are trying to get rid of the commission, especially the ALBA countries, is not that the commission has lost its relevance,” he told GlobalPost. “It is precisely because it is highly relevant, too relevant for them.”