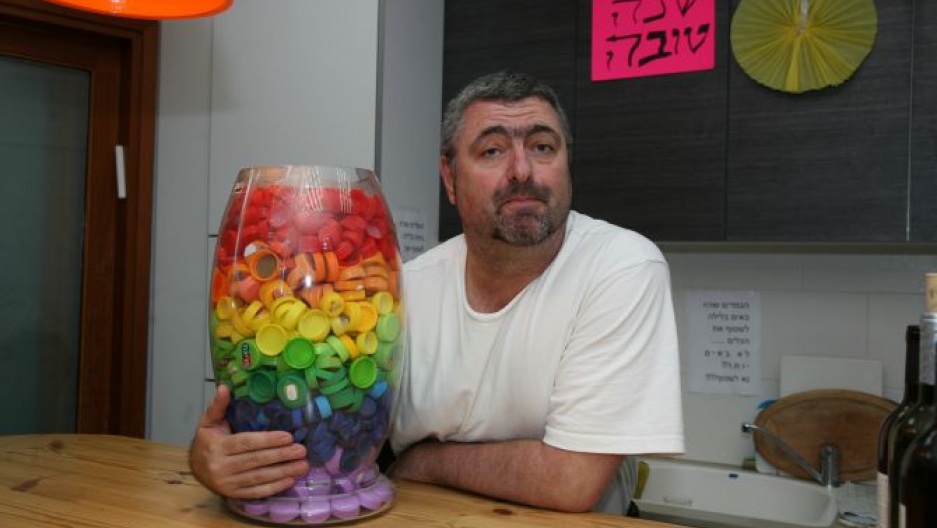 TEL AVIV, Israel — Gloria Gaynor’s anthem “I Will Survive” is never out of place in a gay setting, but something about it was different on this particular night.

The words were coming through in Arabic instead of English, the uplifting disco beat resounding against the ancient walls of the club housed in a mixed neighborhood where the Arab city of Jaffa blends into the edges of modern Tel Aviv.

Conflict still rules the region, a complex and bloody dispute about land, history and religion decades in the making, but at the Palestinian Queer Party, music takes precedence and peace rules the room.

Held every six weeks or so, the party demonstrates what is possible with gays in charge, say those who attend.

The majority of the crowd at the party are gay Palestinians living within the borders set after Israel’s victory over Arab forces in 1948 — officially called Arab-Israelis — but about a third are Israeli Jews. West Bank Palestinians have also been known to cross the separation wall to mingle and dance here, risky a trip as that might be. Once they are among fellow gays, these Palestinians can often hide from Israeli authorities in plain sight.

“If gays were controlling the world, we wouldn’t have any more war,” says Yoni Schoenfeld, the openly gay editor-in-chief of Bamahane, the official magazine of the Israeli Defense Force (IDF), sitting in his office in Tel Aviv and commenting unofficially.

Tel Aviv has been voted the most gay-friendly city in the world and has even been called the “Mecca” for gay Palestinians, but rights advocates say the good press is actually a mask covering Israel’s treatment of Palestinians in general, considered by many human rights organizations and observers to be a persecuted group.

The phenomenon has been termed “pinkwashing,” which tends to deify Israel as a socially enlightened society while demonizing Palestinian and other Arab attitudes about lesbians, gays, bisexuals and transgenders (LGBTs), critics say.

For example, the New York City-based Anti-Defamation League offers a poster via its website reading, “Which of the Middle East nations protects the legal rights, safety & freedom of the LGBT communities? Only Israel.”

But advocates say that because Israel doesn’t accept applications for asylum from gay Palestinians (or any Palestinians at all), it has created a double standard rooted firmly within the conflict itself. Some also see a disconnect between the IDF, which supported openly gay soldiers long before the US ended its “Don’t Ask, Don’t Tell” policy, and the security apparatus accused of mistreating gay Palestinians.

Others, like Schoenfeld, disagree. “I don’t think Israel uses [gay rights] for propaganda.” A gay soldier guarding a checkpoint, he says, “doesn’t see the connection between the two things.”

Gay Palestinians living under Israeli military occupation in the West Bank have been said to suffer doubly, grappling with the challenges of homosexuality within their communities as well as the dangerous and uncertain existence most Palestinians live day-to-day.

Haneen Maikey is the director of Al Qaws, a gay advocacy group that works in Israel and the Palestinian territories (the West Bank and the Gaza Strip). She was at the door during the Palestinian Queer Party, collecting money for entry and making sure everything went well.

The loud music made the event a difficult place for a formal interview and later by email, Maikey declined to speak, stating, “I am aware you are interested in making an article about pinkwashing in the West Bank but unfortunately both Al Qaws and PQBDS [Palestinian Queer Boycott Divestment and Sanctions] are not interested. Generally we have no media policy and only work on creating our own media or cooperating with allies when it is needed."

Maikey also did not want other West Bank activists who work with her to be interviewed. Ironically, the result of such hesitance to comment is that the voices who speak most openly about gay Palestinians are actually Jewish Israelis.

Anat Ben-Dor and Dr. Yuval Livnat are co-directors of the Refugee Rights Clinic at the Tel Aviv University School of Law. Part of their work is advising LGBT Palestinians who have come into Israel and attempted to claim asylum. Ben-Dor co-authored “Nowhere to Run,” the 2008 publication detailing horrific treatment of gay Palestinians within the territories and Israel itself.

“Gay Palestinians are caught in the middle of the Israeli-Palestinian conflict,” the report reads. “They are persecuted in the occupied territories by militant groups, Palestinian security forces and members of their own families. When they flee, they are hunted inside Israel by police who seek to return them to the territories from which they have escaped, usually forcing them to live in hiding and eventually run away again.”

At a sunny café on the University campus, Ben-Dor explained “we try to take every [LGBT] asylum case we hear about. We prefer these cases.” Still, she added, “everyone knows there is no solution to stay [in Israel].”

Livnat says that for Israeli gays, the situation is better than in the United States, where foreign-born partners of citizens have traditionally not been allowed to immigrate. Within Israel however, foreign partners can sometimes become permanent residents. Livnat said “this is why the pinkwashing concept is studied here, because in some sense, we are more liberal.”

He added that being gay helps most asylum seekers, but not Palestinians or those from neighboring countries. Thus Ben-Dor and Livnat encourage gay Palestinians in danger to seek asylum overseas.

At times, gay Palestinians seeking asylum abroad have Israeli partners. “Because Palestinians are physically close, they speak Hebrew and become embedded in the Israeli LGBT community and find partners,” Livnat said. Yet that doesn't mean they can become Israeli citizens.

Ben-Dor said straight Palestinian-Israeli couples have been granted exceptions “on humanitarian grounds,” though recent rulings have made this more difficult, claiming such unions create loopholes in anti-terrorism initiatives.

'An Art to Survive'

Gay Palestinians also find help in Tel Aviv’s AGUDA, the LGBT community center staffed in part by Shaul Ganon, an imposing man with a surprisingly nurturing demeanor. He works out of the Nahmani Street building, infamous as the site of the 2009 murder of Nir Katz, 26, and Liz Troubishi, 17, in an attack by a still-unknown intruder.

Ganon, making clear he speaks for himself and not his organization, said with pinkwashing, “each side is trying to gain some points. The truth is the only one who gets screwed by this is the Palestinian gays.”

Ganon first noticed gay Palestinian refugees in 1995 while helping gay street youth in Tel Aviv, many of whom working in prostitution. He discovered, “at least half of them were Arabs and Palestinians.” Not all the Arab men identified as gay, he says, explaining, “sometimes as an art to survive, it was sex with guys, but some were gays.” Many were from small Palestinian villages.

Since 1995, Ganon says he has approached over 900 gay Palestinians to provide help, but that ultimately, only about 60 agreed. Such men are provided with a card from the AGUDA, to show Israeli police to prevent them from being brought back to the West Bank, though this is not foolproof.

A 28-year-old Palestinian in Ganon’s program, originally from Hebron, was at the AGUDA. He was thin and tall, his body marked by scars. Giving his name only as Mohammed, he pointed to a place on his body where one of his brothers stabbed him with a screwdriver. Ganon translating, Mohammed sarcastically remarked, “he was trying to fix me because I am a homosexual.”

Mohammed says “for 15 years, people know me here. Tel Aviv is my home.” When asked how he has lived here for so long, he replies, “I did anything to survive. When you are hungry, you have to do anything.” Drugs, theft and prison all come up in the conversation, but it’s hard to tell if he’s talking about himself, or others in his situation.

Ganon worries about foreigners making quick generalizations of Palestinian and Israeli issues, even from a gay perspective. He says he believes LGBT Palestinians want to slowly change their society, but “we are not in their shoes. Their suffering is their suffering,” and that such groups prefer “quiet work, not to go publishing what they are and what they do,” explaining why Maikey of Al Qaws won’t comment to journalists.

At the same time, he says Western journalists covering these issues can be “patronizing,” adding, “the Western way of thinking doesn’t apply all the time here. Not just in Israel, but in the region.”

“The truth is, as a gay, I don’t feel I have all my rights,” he says. “But Israel, especially Tel Aviv, is very gay-friendly. There are some things we cannot deny.”

Ganon says the Israeli government is “ready to take the credit for mainly the work of the [LGBT] community. In my personal opinion if the state of Israel is using human rights for the state of Israel, we should get something for that.”

Yet even if Israel might use good press about its treatment of gays to change public opinion about the occupation, Ganon believes Palestinian society is no friend to his community: “I don’t see the Palestinians demonstrating for us.”