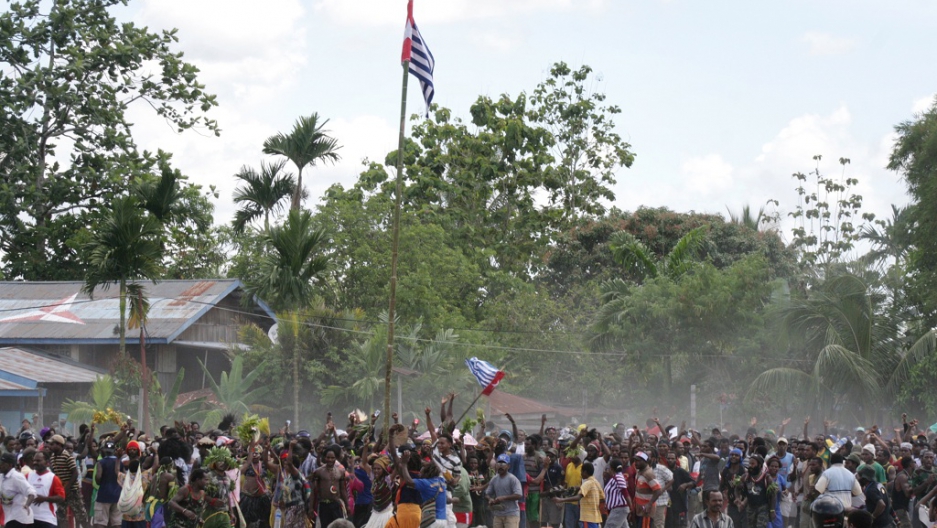 It's not the first time the Indonesian province of Papua has been rocked by violence. Here Papuan demonstrators erupt in a short-lived celebration as they raise the banned Morning Star flag on a bamboo pole in Timika on Dec. 1 2011, the 50th anniversary of the region's claim to independence. Indonesian police and troops opened fire soon after.
Credit: TJAHJONO ERANIUS
Share

A road accident involving two Indonesian soldiers and a young boy has sparked some of the worst violence seen in the Indonesian province of Papua in years.

AFP explains that the unrest began on Wednesday when the soldiers' motorcycle hit a child in Wamena town.  Residents angered by the incident turned on the soldiers and stabbed one of them to death.  The other is in a critical condition.

"Locals got angry by the accident and mobbed our members. They stabbed them on the chest with sharp weapons," the provincial military spokesman Ali Hamdan Bogra is quoted as saying.

Radio New Zealand International says it has received reports that Indonesian security forces were conducting a brutal sweep operation in response.   It describes how scores of people had been beaten, about 500 houses burned and said live ammunition was "being fired indiscriminately."

The tribal council chairman for the Jayawijaya Regency, Lemok Mabel, said the situation in Wamena was "chaotic" and called on the Indonesian government to step in and protect civilians, according to the Jakarta Post.

The Jakarta Globe says that gunmen shot a woman and a police officer on Thursday, brining the total number of people shot in the province since Monday to eight.

The Indonesian military has denied that clashes took place and accused separatists of burning down their own shops, according to the Sydney Morning Herald.

More from GlobalPost: The state of occupation

The number of deaths has not been independently verified, but Papua specialist Greg Poulgrain told Radio Australia that locals were saying "it's worse than the situation that occurred ten years ago."

The BBC describes Papua as an area rich in resources with a diverse population that "often feels ignored by the central government in Jakarta."

More from GlobalPost: Every man in Papua, Indonesia must be circumsised