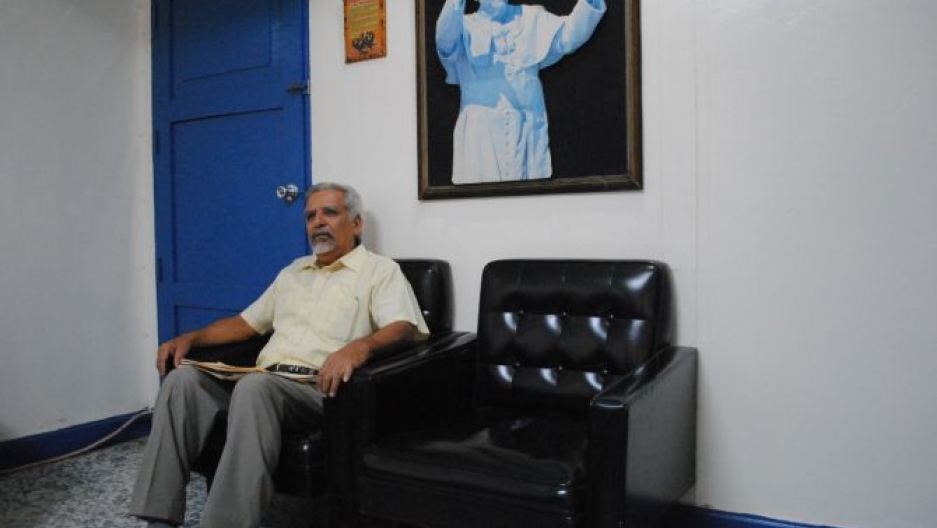 William Somarriba claims he was fired as a taxman for the Nicaraguan government because he didn't belong to the ruling party, the Sandinistas.
Credit: Tim Rogers
Share

MANAGUA, Nicaragua — Tens of thousands of Nicaraguan civil servants who claim they’ve been wrongfully terminated by the leftist Sandinista government are appealing for help from the US Department of Labor.

Alvaro Leiva, the lawyer representing the group, claims that nearly 20 percent of Nicaragua’s entire public-sector workforce has been fired “illegally for political reasons” since the Sandinistas returned to power in 2007 under President Daniel Ortega.

Workers here claim that in addition to the mass layoffs of civil servants deemed disloyal to the ruling party, the government has implemented a system wherein job applicants are usually asked for a letter of recommendation from their neighborhood Sandinista Council of Citizen Power and a membership card for the National Workers’ Front, the official Sandinista union.

It may be wishful thinking — not to mention a touchy political issue in a country with a history of US interventionism — but the 23,439 former state employees and their federation of unions hope to find justice in the Central America-United States Free Trade Agreement (CAFTA).

CAFTA, which entered into force in 2006, has been particularly good for the Nicaraguan economy, boosting exports to the US by 75 percent, attracting millions of dollars in foreign-direct investment, and creating tens of thousands of jobs. But Leiva alleges that the Ortega government has abused its own labor laws in the process, violating Nicaragua's contractual obligations under CAFTA and a dozen other international labor conventions.

In a complaint due to be filed on Thursday, Leiva charges that the Nicaraguan government itself is an abusive employer, and is asking the Department of Labor’s Office of Trade and Labor Affairs (OTLA) to pressure Ortega’s administration to rehire and/or pay restitution to the fired civil servants.

The problem of labor abuses against middle-class professionals is not new in Latin America; it occurs every time there is a change in government. Unlike the working poor, who risk losing their factory jobs when the economy dips, Latin America’s pinched middle class — much of which is employed in the public sector— risk losing their jobs every time there’s an election.

The general rule is: The greater the ideological swing from one administration to the next, the more vulnerable hapless bureaucrats are to arbitrary turnover. This is especially true in Nicaragua, where until a generation ago regime changes were so extreme they were done with guns. Even though governments here are now largely elected democratically, each new administration has continued the time-honored practice of “Quitate vos, pa’ ponerme yo,” or, loosely translated, “You’re in my seat, dude.”

While it’s now up to the Department of Labor to decide whether Leiva’s case against the Nicaraguan government has any merit, the fact that his federation of unions is even appealing for outside help demonstrates the frustration and impotence that many Nicaraguan workers feel in a system where their boss is judge, jury and executioner.

Even Sandinista unions with a bit of an independent streak claim they are treated like “second-class workers” in a country where blind obedience is often considered a virtue.

More from GlobalPost: Nicaragua goes back to gold

The Sandinistas’ first government was marked by a tumultuous decade of revolutionary rule, a bloody counterrevolutionary war against US-backed “contra” rebels, and a mixed-economy gone haywire. Yet for all the Sandinistas’ post-Cold War political and economic transformations, the party hasn’t entirely forgotten its authoritarian roots.

Today, the government’s discrimination of public-sector workers is — from an outsider’s view — oddly quaint; at times it still seems like an anachronistic throwback to the days of Communism, where party membership was a palladium of citizen rights and a prerequisite for state employment. Ortega’s cult of personality pervades government offices, with posters celebrating him plastered throughout and workers often called to attend political rallies at nighttime or on the weekends.

“Public employees are in a situation that is precarious and totally indefensible,” says opposition congressman Alberto José Lacayo, president of the legislative Commission on Labor and Union Affairs. “If state workers are not part of a Sandinista union, they have no rights. Many have been fired without reason — or, more accurately, the reason was that they are not Sandinistas.”

‘Who among you is a Liberal?’

Carlos Brenes, a former taxman for Nicaragua’s Revenue Agency (DGI), said he was “invited” to 110 political rallies during the first seven months after Ortega’s return to power in 2007. But as a proud member of the opposition Liberal Party, Brenes skipped every one. Then, on a hot July day, Brenes sealed his fate when his boss, Walter Porras, the Sandinistas’ flamboyant and Bible-thumping tax director from Managua, visited Brenes’ tax collection office in Granada.

During the meeting with employees, Porras asked, “Who among you is a Liberal?”

“I knew most of the other employees in the office aren’t Sandinistas, but I was the only guy who raised his hand,” Brenes said. The DGI boss used the moment as an opportunity to underscore the Sandinistas’ new spirit of tolerance and inclusiveness in its so-called “government of reconciliation and national unity.”

“See,” Porras said, pointing to Brenes. “We have Liberals working here too.”

A month later, Brenes was fired due to “restructuring.”

Other cases of 'defiance' were even more subtle, but workers met the same fate. Sandra Lucia Baldelomar claims she was fired from the DGI simply for refusing to applaud for Porras at a political rally.

In total, 889 state employees have been fired from the DGI over the past five years. Yet not all of them can identify their fatal flaw — that moment when they upset their boss or revealed their true political colors.

William Somarriba, a neatly appointed man with a trimmed goatee that’s more white than gray, took professional pride in his job as a DGI taxman. As a department director, Somarriba, 63, hoped his seniority and accumulated experience would provide him with a certain amount of job security. Still, he wasn’t sure it would be enough to offset the fact that he’s not a Sandinista party member.

It wasn’t. On a Friday afternoon in July 2008 — four months after he got a letter from his new boss assuring him his job was safe — Somarriba was called back into human resources and handed a different memo saying his job had been terminated due to “institutional restructuring and reorganization.”

Somarriba says “ex-Sandinista soldiers” employed by the DGI told him to leave the premises immediately and barred him from returning to his desk to collect his personal belongings. “They treated me like a criminal,” he remembers soberly.

After years of dutiful service to the state, Somarriba was put out on the street with no clear explanation and no severance pay, one year before his retirement. Since then, he has spent his “golden years” fighting an uphill legal battle for restitution in the Sandinista-controlled court system.

For many, the DGI has become emblematic of public-sector abuses under the Ortega administration. Eventually, however, DGI chief Porras, whose reign became so scandalous it was referred to in the press as “Waltergate,” became untenable even for the Ortega administration. Following weeks of media reports about unabashed corruption and malfeasance under Porras’ watch, the Sandinista taxman was dragged across his own chopping block (the Comptroller General’s Office says its final audit of Waltergate will be released in August).

More from GlobalPost: What does it mean to be a 'leftist' in Latin America?

Yet unlike the hundreds of professional tax collectors sent to the guillotine before him, Porras “received all his severance pay,” Somarriba notes bitterly.

The DGI debacle isn’t the only mess behind the closed doors of the Sandinistas’ funhouse. Another 62 government institutions have reported similar abuses suffered silently by government pencil-pushers.

In addition to the more than 20,000 state workers who have reportedly been sacked for political reasons, 156 non-Sandinista labor unions have been eliminated after their leadership and members got fired, according to the Democratic Federation of Public Sector Workers (Fedetrasep).

“The saddest part is that these firings, most of which we have looked into and documented, have generated an unnecessary public debt of approximately $29.5 million in unpaid severance and restitutions,” says Leiva, Fedetrasep’s lawyer and secretary of labor affairs. “The DGI alone has not paid any severance in more than five years.”

'They are the pretty ones'

Before appealing to the US Department of Labor, Leiva also filed complaints before the International Labor Organization (ILO), the Central American Court of Justice, and the Inter-American Commission on Human Rights — all of which are pending reply. He says he hopes several of those cases are soon resolved in his group’s favor, so he can include those rulings in his CAFTA case.

Previous CAFTA labor abuse cases have been brought against Guatemala and Honduras, but those cases alleged the governments had failed to protect workers from violations committed by private-sector employers.

Meanwhile, the main Sandinista labor union has been reduced to the role of government cheerleader, which is “always the role labor unions play in dictatorships,” Lacayo snorts.

“The FNT is putting party interests above workers’ rights," he said. “They are the pretty ones who bat their eyes at the president.”

The Sandinista government, meanwhile, remains as tight-lipped and secretive as ever. Both the Labor Ministry and the FNT refused to answer repeated requests for interview or comment.

Ironically, in 2003, the Sandinista opposition tried to put an end to the practice of political persecution in the workplace by promoting — and passing — Law 476, the Civil Service Law. But since returning to power, the Sandinistas seem to have forgotten what it’s like to be on the other end of the broom, critics say.

“The situation is very politicized and very polarized,” Sanchez laments. “Many workers are joining the FNT because they view it as a form of job security. They’ll put on their shirt, even if it doesn’t fit.”

For those like Carlos Brenes, the taxman who got sacked for raising his hand to identify as a member of the Liberal Party, CAFTA seems a possible — if remote — solution to his exasperation.

“The court ruled in favor of my restitution four months ago, but I still can’t get the Labor Ministry to uphold the sentence,” he said. “And they didn’t even let me take my coffee mug when I got fired. I want my mug back!”

This reporting was supported by a grant from the Pulitzer Center on Crisis Reporting.