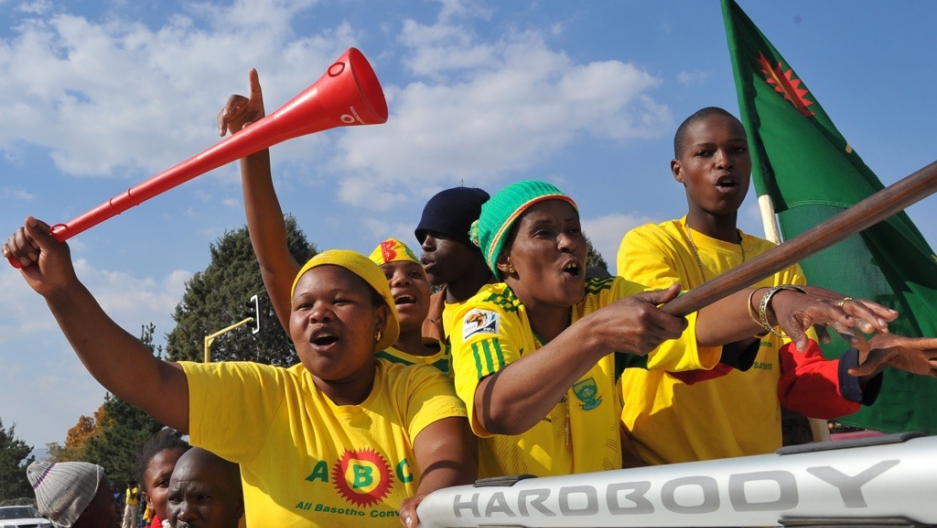 Supporters of Thomas Thabane, leader of the All Basotho Convention (ABC) party, celebrate in Maseru. Thabane is expected to become the tiny country's new prime minister. Voting took place smoothly across the kingdom where most people live as farmers in villages separated by towering mountain ranges, which many crossed by foot to reach their polling stations.
Credit: Alexander Joe
Share

THABA BOSIU, Lesotho — It was election day in Lesotho, and after almost three hours of standing in line, Rosina Moiloa had nearly reached the doorway of the threadbare school that doubled as the polling station in this village. But Rosina, a first-time voter, wasn’t griping about the wait.

The textile worker earns $140 per month, but spends nearly half that on the 30-minute taxi commute to her T-shirt factory in the capital, Maseru. In a country of 1.8 million, where half live in poverty and three-quarters lack electricity, she craves affordable educational opportunities for her two children.

So in the latest test of democracy in Africa, Rosina, 42, withstood the early-winter chill in the “Mountain Kingdom” of Lesotho, to reject the 14-year reign of Prime Minister Pakalitha Mosisili.

“We’ve been told that one vote can change a nation,” she proclaimed, with hands stuffed in her coat pockets for warmth, as other queuing villagers nodded. “I want to see if this is true.”

The May 26 balloting was hailed by political observers as one of the most transparent elections southern Africa has ever seen. Moreover Lesotho appears to have achieved a relatively smooth power transfer. The election resulted in the country’s first opposition victory and the formation of a coalition government. There were no accusations of vote-tampering. There was calm in the streets. And it appears that Mosisili will step down peacefully this week.

In a corner of the globe with little tradition of compromise and power-sharing, the election challenges notions about the dire fate of democracy in Africa and reminds me that many of the oft-derided “Western values” are in fact universal values.

What society wouldn’t want to hold its leaders accountable for their words and deeds?

It has not always been this way in Lesotho. As recently as 1998, post-election violence saw rioting and fires in Maseru. South Africa, which surrounds this mountain enclave, sent in 700 troops. Overall, some 58 locals and eight South African soldiers died.

As the May 26 elections approached, Basotho and foreigners alike grew anxious about the potential for renewed violence — especially after pro-government and opposition forces clashed on April 19 and were beaten back by baton-wielding police. Ten people were injured.

Days later, though, I was heartened by a 62-year-old Basotho housekeeper named Anna, who unintentionally made the case for freedom of expression and a multiparty system.

“If a party makes promises you don’t like,” she explained, “choose another party. We must respect different opinions.”

Although Mosisili encouraged supporters to “retaliate” if attacked, there were other signs of hope.

Three days before the vote, state-controlled Lesotho Television — the country’s lone channel — broadcast its first live, televised election debate. In a Maseru café, as mindless music videos throbbed from a television screwed to the wall, a quartet of middle-aged Basotho men asked the waitress to flip to the debate — to watch democracy in action.

On election day, I headed to Thaba Bosiu, a name that resonates across the nation. In the Sesotho language, it means “mountain of the night,” as the village sits at the foot of the eponymous red-rock plateau. It was the stronghold of the venerated 19th-century king, Moshoeshoe, who’s been called southern Africa’s “first democrat” for his open-air, parliamentary-style gatherings of local chieftains.

On that day, along a rutted, unpaved road, past herds of grazing cows and traditional dung-packed huts known as rondavels, democracy unfolded as orderly as anywhere in the West — albeit at a snail’s pace. Voters filed in, one at a time, to cast their ballot in cardboard booths, while eagle-eyed representatives of each party sat and watched. A lollipop-sucking policewoman even enforced the rule against politicking outside, advising me not to be too provocative with my questions.

“Careful not to influence the other voters,” she said, without removing her lollipop.

Since the voting there has been a relatively smooth transition toward forming a new coalition government that may include from three to five opposition parties.

A former foreign minister, Tom Thabane is expected to be sworn in as the new prime minister on Friday.

Although there are some clouds on the horizon — such as questions over how long the various opposition parties will coexist in one government — if Lesotho can carry out a peaceful, democratic change of government it will not only be a historic achievement for this nation but for all of southern Africa.