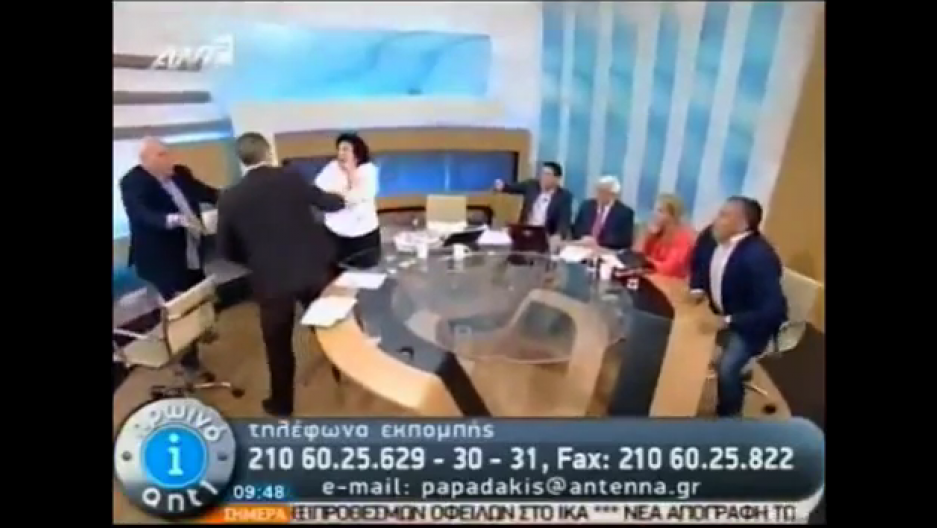 Greek police are searching for a far-right MP, Ilias Kasidiaris, after he slapped a fellow politician repeatedly on live television.

Kasidiaris, who is the spokesman for the Golden Dawn party as well as an elected lawmaker, hit Communist MP Liana Kanelli three times in the face during a TV debate show this morning, in what Athens News called "shocking and unprecedented scenes."

Video of the incident shows a heated discussion between several MPs.

Kasidiaris first throws a glass of water over Rena Dourou, a member of the left-wing SYRIZA coalition; when Kanelli stands up to remonstrate with Kasidiaris, he physically attacks her, before the host rushes in to pull him away. The camera then rapidly cuts away.

According to Athens News, Kasidiaris assaulted a number of other people in the studio before leaving the building. Police have a warrant for his arrest.

According to the BBC, the outburst was triggered when Dourou brought up Kasidiaris's alleged involvement in an armed robbery in 2007, for which he is due to stand trial shortly. He and Kanelli also traded insults of "commie" and fascist" during a debate about Greece's political history, the Associated Press said.

A statement from Golden Dawn claimed that Kanelli had struck Kasidiaris first without provocation, Bloomberg reported.

Meanwhile SYRIZA said that the incident revealed "the true face" of Golden Dawn, which it describes as a "criminal organization."

The far-right party entered Greece's parliament for the first time in elections last month, campaigning on a platform of anti-immigration, nationalist policies.