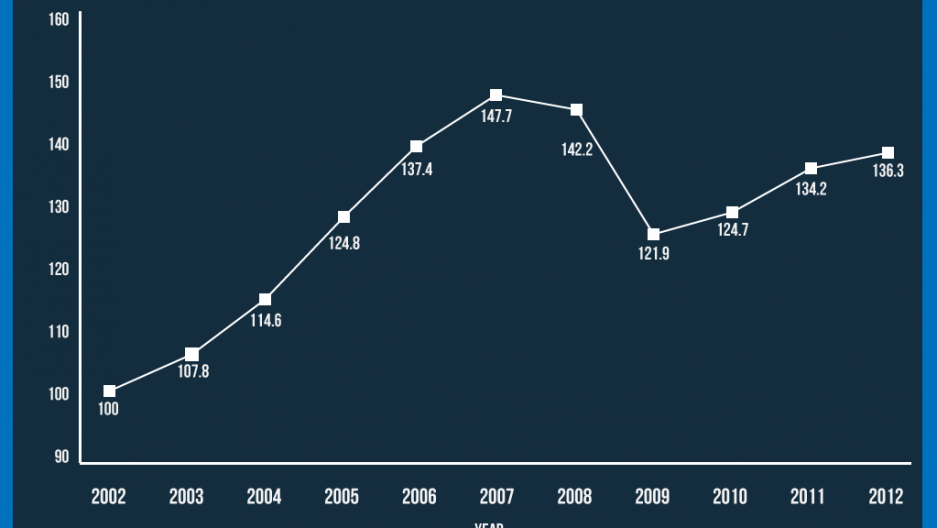 The big picture: Despite a sharp drop, Estonia's economy is humming again.
Share

For more than two years now, Europe has been at war over an economic idea: austerity.

Some – led by German Chancellor Angela Merkel — believe that slashing government budgets is Europe’s trail back to economic prosperity.

Others — prominent among them is NY Times columnist and Nobel Prize winning economist Paul Krugman — think that governments should borrow and spend to get citizens back to work. And if they don’t do it soon, economic calamity could ensue.

This week, the war has shifted to a new battlefield: Estonia, the new darling of the pro-austerity camp.

The country, led by President Toomas Hendrik Ilves, has cut government budgets, slashed civil servants’ salaries, and raised the pension age. In other words, Estonia has embraced austerity, the very medicine that has caused riots and misery in Greece and elsewhere. And prominent Estonians say it’s worked.

The battle has torn across Twitter and the blogs.

Yesterday afternoon, Professor Krugman weighed in with a chart that he says shows that Estonia’s performance is not nearly as rosy as it may seem. Naturally we took note.

But did Krugman cherry-pick data to make his point?

Before we address that question, we should point out that we have flesh in this fight. GlobalPost largely kicked off the battle with an article by our Brussels correspondent, Paul Ames. The story, titled "Yes, they use the euro. And the economy is booming," went viral (in certain circles). Austerity advocates apparently picked it up as proof that they were right — that what Europe needs is more belt tightening.

Frankly, here at GlobalPost, we're not sure we agree with this conclusion. On the contrary, we've reported extensively on the pain that harsh belt-tightening has inflicted on citizens across Europe.

We've struggled to understand how Germany could actually stick with a policy that appears to be driving Europe into a deep recession, or worse.

Rather, we saw Estonia as an intriguing data point – a teachable example, or an opportunity to re-visit our assumptions. Indeed, our understanding of the crisis has often been swayed by Krugman’s influential column; here was an anomaly that bucked the trend.

On his blog, however, Professor Krugman dismissed Estonia’s alleged progress with a chart that appeared to show the economy hasn’t yet even recovered. That intensified the fight. Estonia’s president responded angrily, with a series of late-night expletive-ridden Tweets — an ad hominem attack on the economist's credentials.

More from GlobalPost: Who knew Estonia could be so controversial!

Why was he so angry? We went back and looked at the numbers. We think that the president may have a point, as follows.

Here's the chart that Krugman published:

"[A] terrible — Depression-level — slump, followed by a significant but still incomplete recovery. Better than no recovery at all, obviously — but this is what passes for economic triumph?"

But wait a minute, why did Professor Krugman peg his chart to the peak of Estonia's bubble? Doesn't that simply demonstrate that Estonia has yet to re-capture the frothy, debt-driven bubble of 2007? So how does Estonia's real, productivity-driven economy match up to the current performance? Wouldn't that be a more meaningful measure of how Estonia — and its austerity policy — has worked?

We crunched the numbers from Eurostat (using 2002 as 100, and Eurostat's real GDP growth figures) and came up with the chart below, which shows a broader picture.

Over the past decade, we calculate a real GDP growth rate of 3.4 percent — which seems respectable, if not admirable, considering Europe’s grim economic circumstances.

Here’s another, more complicated, way to look at it:

This chart (which sets 2005 GDP as 100) shows that Estonia has grown at a brisk clip, culminating in what appears to be a bubble in 2006 and 2007, before recovering. On relative terms, it vastly outpaces the euro zone (the terra cotta line in the middle).

We don't think Estonia is a model for the rest of Europe. As Paul Ames pointed out in the article that kicked off the kerfuffle, it's a very small country with almost no debt — not exactly a good test case for Greece or Spain.

Still, its recovery, after implementing austerity, is intriguing.

So, Professor Krugman and President Ilves, as much as we’ve been amused by the late night Twitter spat, can you take a closer look, and see what Europe might learn from Estonia?

Lord knows, Europe could benefit from any insights.