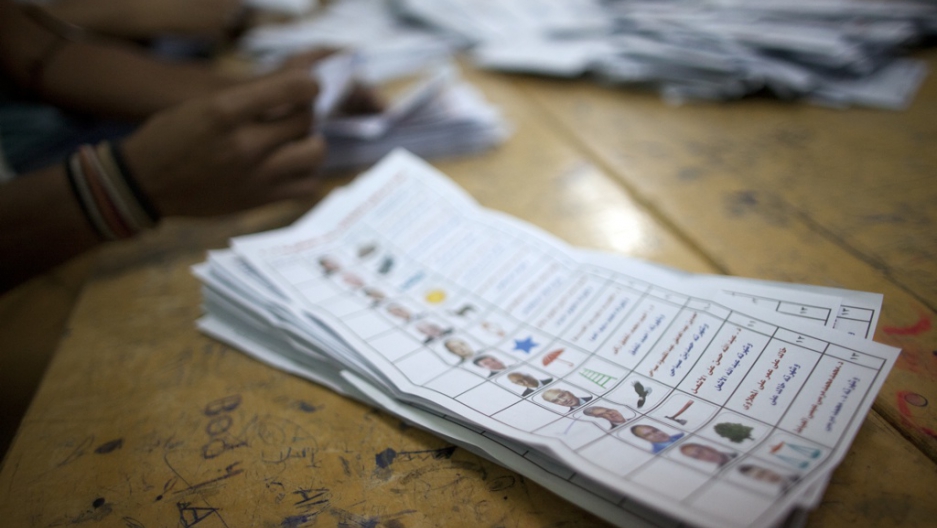 An Egyptian election official counts ballot papers at a polling station in Cairo on May 24, 2012 after polls closed in the country's landmark presidential election.
Credit: Marco Longari
Share

CAIRO, Egypt — Egypt held the first round of its historic presidential election late last month, with much fanfare and optimism.

Now its very legitimacy is being attacked on multiple fronts, threatening to plunge the country into a new round of chaos.

Several developments appear to be undermining the credibility of the polls, including renewed protests in the heart of Cairo, divisions among political forces, and a crucial decision by Egypt’s Constitutional Court that could disqualify one of the two run-off candidates on June 14 — just two days before the second round.

A sound presidential vote is key to ensuring a smooth transfer of power from Egypt’s military rulers to an elected civilian authority, more than a year after popular street protests ousted former dictator Hosni Mubarak.

More from GlobalPost: For Egypt's revolutionaries, the election was the stuff of nightmares

At the heart of the problem is the fact that the first round produced two run-off candidates who combined garnered less than half of the total vote.

“The fact that broad segments of society feel alienated by the vote, that a crisis of political confidence exists, undermines the vote in a lot of ways,” said Michael Hanna, an Egyptian-American fellow at the New York-based think-tank, Century Foundation.

The low voter turn-out in the first round, when just 46 percent of Egypt’s voting population of 50 million went to the polls, “is a bad sign of where the body politic is at the moment,” Hanna said. “It casts a shadow on whatever mandate comes out of this.”

Two of the losing, pro-revolution presidential candidates — who together garnered 38 percent of the vote — have declared the initial election results “invalid” due to voting irregularities. So far, however, they've produced no solid evidence of such irregularities. The Carter Center, which monitors elections, said in a preliminary statement that it witnessed irregularities, but not enough to affect the vote.

“For the first time, the revolution has electoral legitimacy,” said Egyptian author and editor-in-chief of Ahram Online, an English-language Egyptian news site.

He is part of a small but vocal movement that is working to boycott the polls by using his vote to write in a statement of protest.

“If you count Sabbahi and Fotouh, you can make a very legitimate argument for saying the majority has been left out of these elections,” he said. “You build a solid voice with that, and crystallize the will of the revolutionary vote.”

Sabbahi and Aboul Fotouh are now calling for the creation of a civilian presidential council made up of a coalition of political figures to pressure Egypt’s military-led government to disqualify run-off candidate and former regime official, Ahmed Shafiq. Their cause has been buoyed by recent protests in Cairo’s now iconic Tahrir Square.

In April, the Muslim Brotherhood-led parliament drafted legislation to bar Mubarak-era figures, including Shafiq, from running for Egypt’s top post.

Shafiq, Mubarak’s last prime minister and former minister of civil aviation, appealed the law. Egypt’s Constitutional Court, according to state-run media, is set to discuss — but perhaps not rule on — the appeal on June 14, just two days before the next round.

Calls for Shafiq’s ouster from the race — in which he would face the Muslim Brotherhood candidate, Mohamed Morsi — intensified over the weekend, following an acquittal on Saturday of six police chiefs charged with killing protesters during Egypt’s 18-day uprising a year ago.

Many viewed the verdict as yet another sign that the Mubarak regime and its cronies continued to operate with impunity.

Thousands of protesters marched to Tahrir Square from various points across Cairo on Tuesday night to demand a retrial of the acquitted police figures, but also for the implementation of parliament’s law to ban Shafiq.

“I don’t want to see Shafiq just disqualified [from the race],” said 23-year-old protester, Ibrahim Abu Zahar. “I want to see him in prison."

Some were worried that canceling the presidential elections, or retroactively excluding Shafiq, would disenfranchise the millions who voted for him in the first round.

“I think it should be the ballot box that governs. These protests [against Shafiq], they are too late. They should have taken place before the first round,” said 23-year-old screenwriter, Ahmed Ali. He said he attended Tuesday’s Tahrir protest to understand better the protest movement’s political demands.

“We should respect what the people want,” he said. “We shouldn’t belittle their choices.”

But according to Hanna, Shafiq’s rise to top presidential hopeful, on a campaign of restoring law and order with a heavy hand, did not take place within a fair and objective political framework.

Egypt’s ruling military has “shaped the political environment and managed the process of competition,” Hanna wrote in a recent issue of the Cairo Review of Global Affairs, a quarterly journal published by the American University in Cairo.

Hanna points to the military’s use of state media to push forward a narrative that benefitted Shafiq, and its politicization of the state bureaucracy and court system to shape the field of candidates.

“If we look at the role of state media, at the role of the courts and bureaucratic institutions, and the lack of transparency involved in how they have operated — all these things are legitimate targets in terms of criticizing the democratic and fair nature of the process,” he said.

“And all of this doesn’t come in a vacuum. It exists in a history rife with vote-rigging [during the Mubarak era]. Perceptions are important in terms of the legitimacy of the electoral process.”