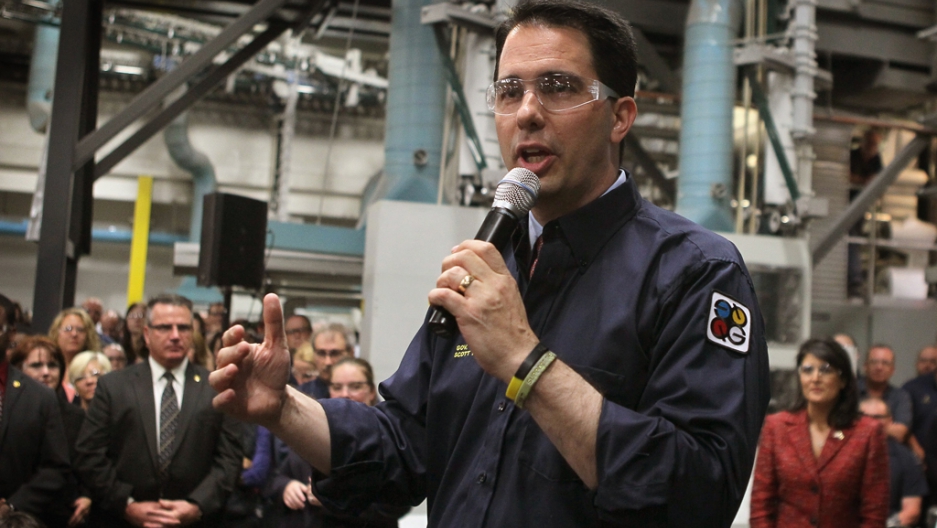 Wisconsin Governor Scott Walker speaks to workers at Quad Graphics while South Carolina Governor Nikki Haley (R) listens during a campaign stop for Walker on June 1, 2012 in Sussex, Wisconsin. Haley was in town to campaign for Walker who will face Democratic contender Milwaukee Mayor Tom Barrett in a recall election on June 5.
Credit: Scott Olson
Share

Wisconsin Gov. Scott Walker managed to hold on to his seat in the recall election on Tuesday, prompting speculation on how President Barack Obama would perform in the state he won comfortably four years ago.

Walker told Fox News, "Gov. Romney has an opportunity ... to come in between now and Nov. 6 and make the case that he's willing to make those same sort of tough decisions," according to the Associated Press.

In 2008, Obama won the state by 14 percentage points, and exit polling on Tuesday showed that Obama still has a 51-44 percent edge over Romney. However, 1 in 5 said they trust neither candidate on the economy, according to the AP. Independent voters broke for Walker, 53-45.

Romney viewed the recall election's results as an endorsement of Walker's fiscal policies. In a statement, he said the results "will echo beyond the borders of Wisconsin," reported the AP.

However, exit polls showed that Walker won the votes of 17 percent of Obama supporters, which suggests, according to The Washington Post, that Obama would have won the race with the electorate that turned out on Tuesday.

Of the 2,457 voters randomly selected for the exit poll, 59 percent were independents, 56 percent called themselves moderates, 52 percent were male and 23 percent were from union households, said The Post.

When asked which candidate would help the middle class more, 47 percent of Wisconsin voters picked Obama, compared to 36 percent who chose Romney, according to The Post.

The Daily Beast's Michael Tomasky noted, "Folks, if ever there was a day in the history of Wisconsin polling that should have shown Romney within spitting distance of Obama--or even ahead, given the obviously massive pro-Walker turnout--it should have been yesterday, which was the biggest and most enthusiastic day for Republican politics in recent state history."

He noted that Obama will not be outspent to the extent that Democratic candidate Tom Barrett was by Walker.

Both campaigns have placed Wisconsin in the "toss-up" category, according to The Post.

"We are coming out of this effort with a stronger Democratic organization and more engaged supporters and volunteers," wrote the Obama campaign’s Wisconsin state director, Trip Wellde, according to ABC News.