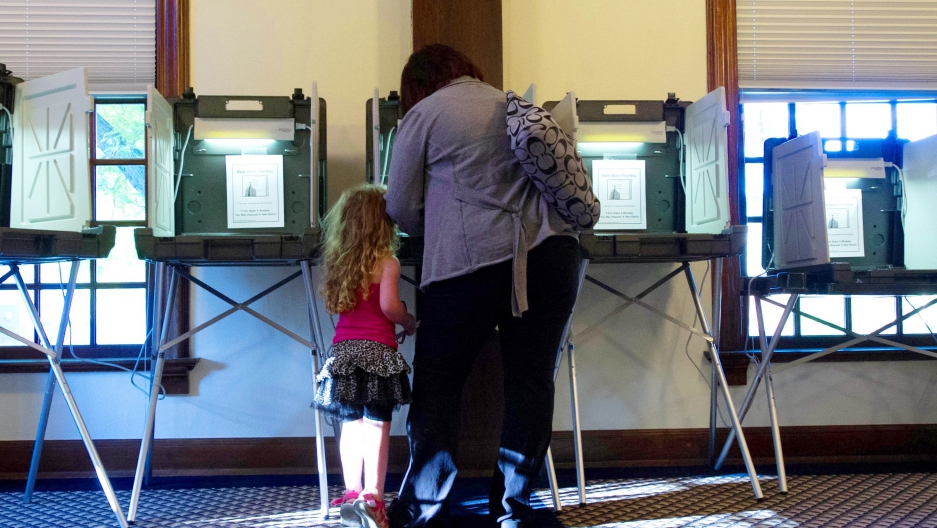 Mother and daughter at a voting booth at City Hall in Hudson, Wisconsin on Tuesday participate in a recall election to choose whether to let Governor Scott Walker stay in office or replace him with Milwaukee Mayor Tom Barrett.
Credit: Karen Bleier
Share

SANTA FE, NM — Politics seems too crass a subject to discuss amid New Mexico’s red-clay hills and magnificent mountains. The quaint adobe houses of Santa Fe should not be adorned with campaign ads, and the excessively polite people should not have to discuss topics as heated as who should be senator or president.

New Mexico held its primary elections on Tuesday, and, other than campaign workers, few people noticed. Turnout was light across the state, barely topping 20 percent.

There were no real surprises — Mitt Romney won more than 70 percent of the Republican vote, adding at least 16 delegates to his total, which is already above the 1,144 needed for the presidential nomination.

Independent voters were barred from the primary though — in New Mexico, one has to be a registered voter of one of the two major parties in order to qualify to vote.

This does not sit well with some voters.

“I do not want to give up my independent status, so I do not have a say,” said Amy Bobrick, who runs a small inn on the outskirts of Santa Fe. “I will have to wait until November.”

In all, five states held elections on Tuesday: New Mexico, New Jersey, Montana, South Dakota and California. Coming this late in the season, the vote was largely symbolic, and attracted little attention. Even giant California did not make much of a splash, although it added 169 delegates to Romney’s tally on Tuesday.

Instead, all eyes were on Wisconsin, where Republican Governor Scott Walker survived a recall vote, beating his Democratic challenger, Milwaukee Mayor Tom Barrett, 55 to 44 percent.

The race had sent shockwaves throughout the country: Walker had provoked prolonged protests in Wisconsin last year, when he stripped state employees of most of their collective bargaining rights in an effort to balance the state budget.

Even in New Mexico, the Wisconsin contest caused ripples.

“I voted before I left,” said Cindy, a 55-year-old resident of Madison, Wisconsin, who was driving cross country with her motorcycle strapped to the back of her camper. “I am so against Walker, I can’t believe he would survive this vote.”

Cindy works in the field of education, and sympathizes with the teachers, who, along with police, firefighters and other public sector employees, have had to take a significant cut in benefits.

Julia Goldberg, a journalist and author living in Santa Fe, was more philosophical.

“Walker managed to turn this into a fight between the voters,” she said. “People who have lost their jobs, lost their houses, are fearful. And fear easily turns into anger. They think, ‘why should the state employees have guaranteed jobs and generous pensions, when I have nothing?’”

Romney praised the win, calling it a victory for “sound fiscal policies” that would “echo beyond the borders of Wisconsin.”

If nothing else, it will turn Wisconsin into a hard-fought swing state in November, and could give the Republicans a road map for turning the elections into a struggle between the haves and the have-nots.

More from Highway 2012: Deep in the heart of Texas

In Santa Fe, though, such momentous events seem far away.

“Yes, I voted,” a young Mexican man said proudly. “I became a citizen one year ago.” Shy and polite, he declined to give his name, and would not reveal how he had voted.

“There are many good choices,” he said. “I am still debating things with my friends.”

His decision, though, will be influenced by his ethnicity, something he does not bother to hide.

“Things can be very bad for Hispanics,” he said. “Just look at Arizona.”

Neighboring Arizona has passed tough laws targeting illegal immigrants, laws that opponents say are discriminatory and unconstitutional. But Sheriff Joe Arpaio and Governor Jan Brewer are not backing down.

“I know a lot of Hispanics, friends of mine, have left Arizona,” said the young man. “It is just terrible. I know there are some immigrants who do bad things, but why should innocent people be punished?”

New Mexico is an altogether kinder, gentler state, but even here there are problems.

According to Goldberg, the Republicans have managed to spin a narrative that “immigrants are bad,” and are attempting to pass voter registration restrictions that could well cut down on the number of Hispanics and other targeted groups — students, the elderly, African American — who tend to vote for the Democratic Party.

“There has been a lot of talk about the voter identification issue,” she said.

The question has already spawned some nasty political shenanigans.

“When US Attorney David Iglesias was appointed to investigate voter fraud, he found very little evidence of it,” said Goldberg. “So they fired him.”

Iglesias was removed from office in 2007, in what he himself has said was a politically motivated process. In an editorial in The New York Times, he named US Sen. Pete Domenici and Rep. Heather Wilson as those who applied pressure to his investigation.

In Tuesday’s vote, Wilson easily won the Republican nomination for an open US Senate seat.

New Mexico has a large Hispanic population — more than 45 percent, according to the latest data.

While it is technically a swing state, most observers think that New Mexico will go for Obama in November.

“I just can’t let myself think about any other possibility,” said Goldberg.