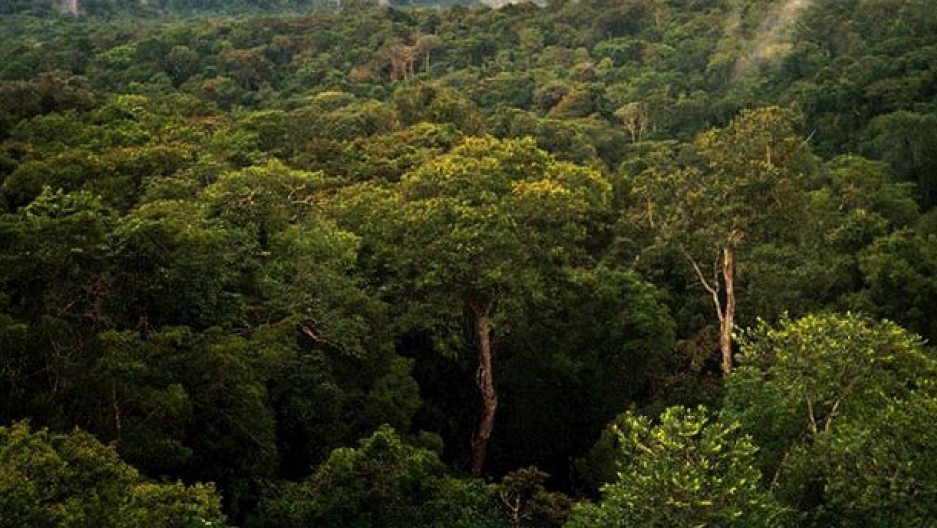 Brazil's Amazon rain forest got a bit of a reprieve by way of a series of vetoes passed by President Dilma Rousseff. (Photo by Phil P Harris via Wikimedia Commons.)

The Brazilian Congress recently passed a bill that would reduce protection of forests in the Amazon. So activists appealed to President Dilma Rousseff.

Everybody from the Brazilian Academy of Sciences to, literally, the Brazilian equivalent of Bugs Bunny was saying ‘veto this bill,' according to Steve Schwartzman, director of Tropical Forest Policy for the Environmental Defense Fund.

In the end, President Rousseff vetoed 12 sections of the bill. The most controversial clause would have given amnesty to all landowners that illegally deforested before 2008. Instead, Rousseff modified that section to only apply to small landowners.

But Schwartzman says any illegally deforested areas still being used for agriculture won’t have to be reforested.

"The best analyses that I’ve seen are suggesting that upwards of 90 percent of those illegally deforested lands from before 2008 are really not going to be required to do anything," he said.

Rousseff also modified a provision that would have required just 30 feet of forestland along Amazon river "green corridors" — so called because they're designed to allow species to move between pockets of Amazon forests — to require at least 300 feet of forests.

The changes and vetoes go back to Congress, which can either accept or attempt to override the president's changes. Whatever happens, though, it's unlikely anything will happen before Brazil hosts an environmental summit later this month.

In advance of the summit, the Rio +20 Conference, William Moomaw is proposing his own approach to managing climate change. Moomaw, a professor at Tufts University, says a new approach is necessary in a world that has plenty of economic problems and different national interests.

"The treaty, as it’s designed, is really a pollution control treaty, and that leads negotiators to talk about burden sharing," he said. "If I’m a negotiator and I go to a meeting on doing something about climate change and I come home and say to my government and my people, ‘I have brought a burden to share with you.’ That is not exactly a formula for success."

Moomaw says we have a development problem, one focused on development powered by fossil fuels, and that's the type of treaty that we need.

"We are saying that somehow more carbon dioxide emissions from burning more fossil fuels equals more economic wellbeing," Moomaw said. "In this paper we quote five world leaders and they all say things like, ‘We can’t do more because it would cut development potential. It would cost our jobs and damage our industry."

Moomaw says everybody sees more emissions as tied to more economic growth, but he thinks that’s not really true. Most of Western Europe, for example,  produces as much GDP per person as the United States, but with half the emissions.

"The opportunity to make something new, to develop whole new industries, would transform the economies of the world into something that is far more productive," Moomaw said.

Specifically, he hopes that the next treaty will be one focused on the provision of clean energy services for all people the world over. And he argues that will take care of not only the pollution problem, but also provide 50 years of economic growth.

"What the current treaty did was it got us on track. It basically said the governments of the world agree this is a huge problem and that we should address it," Moomaw said. "The job is going to be done at a much more local and regional level; it’s not going to be done by dictates from on top."

So, rather than holding out hope for the end-all, be-all climate treaty to come out of the Rio +20 summit, Moomaw is looking to side sessions for major break-throughs. Programs to pay farmers who don't cut down trees — programs that already exist — could be expanded or built upon to make an actual difference in global climate.

But he's also still hoping for a plan that will focus global attention not on reducing pollution, but on building a clean-energy solution to power the world.