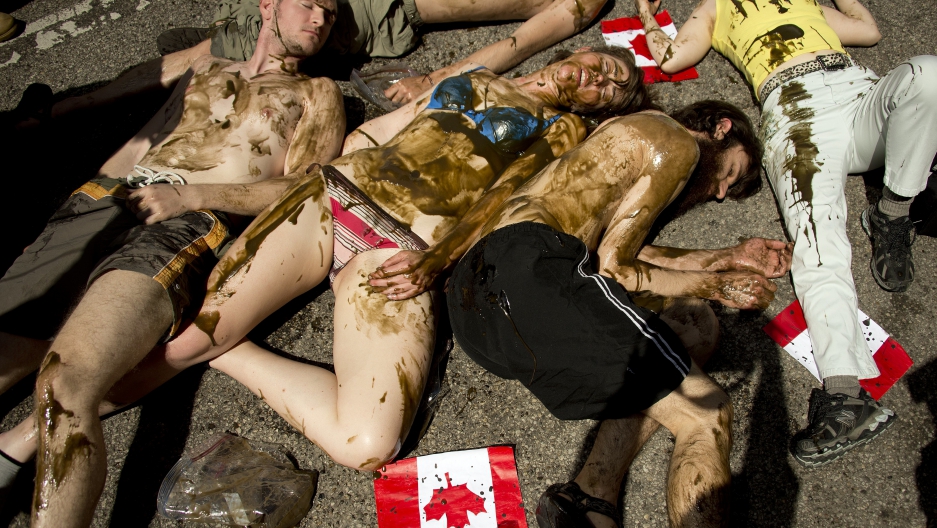 Demonstrators participate in a "die-in" covered in oil as they protest against the Keystone Pipeline and the Alberta Tar Sands in Chicago, Illinois, May 17, ahead of the NATO summit.
Credit: Jim Watson
Share

TORONTO, Canada — When General Motors confirmed the closing of a Toronto-area car plant last week — targeting as many as 2,000 people for layoff — the workers’ union partly blamed what it called the “artificially-inflated Canadian dollar.”

The closure is part of GM’s overall restructuring of North American operations, begun two years ago under bankruptcy court protection. In 2008, GM received a $10 billion bailout from Canadian governments. It repaid that generosity, the Canadian Auto Workers union charges, with the gradual shutdown of an Oshawa plant that makes the Chevrolet Impala and the Equinox.

The union directed some of its anger at the Canadian dollar, which for the past couple of years has generally been on par with, or higher than, the US dollar. That makes exports more expensive, union official Chris Buckley noted, and new investment more difficult to attract. (In 2002, a Canadian dollar was worth 61 cents US.)

The GM shutdown comes as debate over Canada’s high dollar divides the country. It pits the booming resource-based economies of the western provinces against the dwindling manufacturing sector in central Canada. It’s a regional divide that has raised political tensions and strained Canada’s delicate unity.

For much of Canada’s history, economic clout resided in Ontario and Quebec. But economic power shifted west with rising international demand for resources, particularly US-bound tar sands oil from Alberta. The dollar rose even as the 2008 recession hit and wiped out hundreds of thousands of manufacturing jobs in Ontario alone.

The debate was reignited last month by Tom Mulcair, leader of the federal New Democratic Party, the main opposition to the ruling Conservative government. The high dollar, he said, has “hollowed out the manufacturing sector” and cost a half-million jobs.

“The Canadian dollar is being held artificially high, which is fine if you're going to Walt Disney World, [but] not so good if you want to sell your manufactured product because the American clients ... can no longer afford to buy it,” Mulcair told Canada’s CBC Radio.

Mulcair added that Canada suffers from “Dutch disease” — a term coined to describe how the discovery of natural gas in the Netherlands in the early 1960s forced an increase in the country’s currency and a collapse in manufacturing.

The main culprit, Mulcair made clear, is Alberta’s tar sands — massive bitumen deposits that cover an area the size of Florida. They produce 1.6 million barrels of tar-like oil a day. Production is expected to grow to 2.7 million barrels in 2016 and 5.4 million barrels a day by 2035.

The oil sands are keeping the dollar artificially high, Mulcair argues, because companies developing them aren’t paying for the pollution they cause, from greenhouse gas emissions to massive pools of toxic sludge.

Read more: Canada, Saudis clash over oil pipeline to US

“He should be ashamed of himself for attacking the west, dividing our country, and not even having visited the places he is attacking,” Moore said in the House of Commons. “It is unconscionable for someone who wants to be the prime minister of the country to be so utterly irresponsible.” Last week, Mulcair toured the tar sands for the first time, and stuck to his criticisms.

Economic analysis has mostly diagnosed Canada with some level of Dutch disease. But at least one conservative think-tank argues that tar sands development stimulates demand for manufactured goods across the country.

It also estimates Alberta will get almost all the $4.9 trillion in economic activity the tar sands is expected to produce over the next three decades, with only 3 percent going to Ontario and less than 1 percent to Quebec.

Politics clearly plays a role in the debate. The powerbase for Mulcair’s NDP, a party with socialist roots, is Quebec and Ontario; for Prime Minister Stephen Harper’s Conservative party, it’s the west. In the 2011 federal election, Conservatives won 27 of Alberta’s 28 seats.

Harper has also made boosting oil sands production a top policy priority, pushing hard for the building of new pipelines to the US and the Pacific coast, which would open Asian markets.

His government has announced it is pulling out of the international Kyoto treaty on greenhouse gas emissions, and is passing legislation that will speed up the approval process for oil pipelines. It has attacked environmental groups opposed to pipelines as “radical,” is having their charitable status reviewed, and has disbanded the National Roundtable on the Environment and the Economy, a respected panel mandated by Parliament to advise governments on sustainable development. The panel’s sin was to call for a tax on carbon emissions, which Harper opposes.

For many western Canadians, the resource boom — and Harper’s strong support —balances decades of federal policies that boosted Ontario and Quebec’s manufacturing industries. They recall with fury the 1980 National Energy Program, which fixed domestic prices for oil and gas below world levels. The program was decried as an attempt to confiscate the west’s resources by a federal government whose main support came from central Canada.

That policy gave rise to an Alberta-based movement to separate western Canada from the rest of the country. Tom Flanagan, a former adviser to Harper, warns that if Mulcair becomes prime minister, his policy on the tar sands would reignite separatist anger, the Globe and Mail reported.

Mulcair has been credited for launching a much-needed debate on the scale of tar sands production, and its impact on the national economy. Collateral damage from that debate may be Canada’s unity.