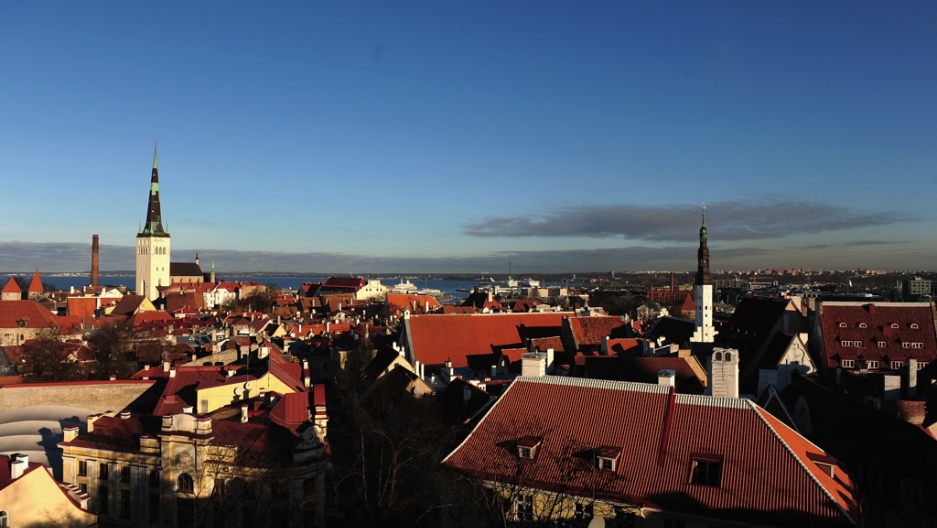 A general view of the medieval city of Tallinn on November 10, 2011 in Tallinn, Estonia. As the rest of the euro zone suffers from a debt crisis, Estonia's economy is red-hot.
Credit: Jamie McDonald
Share

TALLINN, Estonia — It’s the euro zone Jim, but not as we know it.

Estonia is the only euro-zone country with a budget surplus. National debt is just 6 percent of GDP, compared to 81 percent in virtuous Germany, or 165 percent in Greece.

It all seems a long way from the gloom elsewhere in Europe.

Estonia’s achievement is all the more remarkable when you consider that it was one of the countries hardest hit by the global financial crisis. In 2008-2009, its economy shrank by 18 percent. That’s a bigger contraction than Greece has suffered over the past five years.

After three years of painful government belt-tightening, that’s not exactly the message that Europeans further south want to hear.

At a recent conference of European and North American lawmakers in Tallinn, Koppel was lambasted by French and Italian parliamentarians when he suggested Europeans had to prepare for an “inevitable” decline in living standards, wages and job security, in order for their countries to escape from the debt crisis.

While spending cuts have triggered strikes, social unrest and the toppling of governments in countries from Ireland to Greece, Estonians have endured some of the harshest austerity measures with barely a murmur. They even re-elected the politicians that imposed them.

“It was very difficult, but we managed it,” explains Economy Minister Juhan Parts.

“Everybody had to give a little bit. Salaries paid out of the budget were all cut, but we cut ministers’ salaries by 20 percent and the average civil servants’ by 10 percent,” Parts told GlobalPost.

“In normal times cutting the salaries of civil servants, of policemen etc. is extremely unpopular, but I think the people showed a good understanding that if you do not have revenues, you have to cut costs,” adds Parts, who served as prime minister from 2003-2004.

As well as slashing public sector wages, the government responded to the 2008 crisis by raising the pension age, making it harder to claim health benefits and reducing job protection — all measures that have been met with anger when proposed in Western Europe.

More from GlobalPost: Europe gets a report card

History helps explain citizens’ willingness to bite the austerity bullet. Estonia broke free from Soviet rule just over 20 years ago, together with its Baltic neighbors Latvia and Lithuania — who are also enjoying a robust recovery, but are outside the euro zone.

For older Estonians, memories of the grim days of Soviet occupation make it easier to accept sacrifices today. Among the young, there is a widespread awareness that in a nation of just 1.3 million people, the freedom and opportunities their generation enjoy depends on unity in times of crisis.

“Western Europe has not really experienced a decrease in living standards since the Second World War,” says Koppel. “Historically, austerity is inevitable, but it’s not part of the culture of Western Europe right now. This is what really differentiates us, that we were able to understand that.”

It still has its share of economic problems. The average monthly take-home pay of 697 euros ($870) is among the lowest in the euro zone and unemployment at 11.7 percent is still above the bloc’s average. The shockwaves of euro-zone collapse radiating from southern Europe could yet snuff out the recovery.

The jobless rate is falling however, thanks in part to a thriving tech sector.

Estonia has also paid close attention to the fundamentals of establishing a favorable business environment: reducing and simplifying taxes, and making it easy and cheap to build companies. Its location — with quick access to Nordic, German and Russian markets — has also helped, along with the very low debt level Estonia inherited when it broke from the Soviet Union. Joining the euro zone on Jan. 1, 2011, Estonia stable economy shone, despite the crisis in the currency bloc.

Innovative young companies have been at the forefront of the Estonian revival thanks to successful startups like the web-designer Edicy, online money transfer service Transferwise and point-of-sale software developer Erply.

The daddy of them all is Skype, which was developed by a quartet of Estonian software geeks with their Swedish and Danish buddies back in 2003, and was bought up by Microsoft last year for $8.5 billion.

The internet phone company runs its biggest operations out of a technology park in a Tallinn suburb, where over 400 people from 30 countries work in a relaxed, light-filled office block complete with sauna, childcare and series of trendily designed cafes and chill-out lounges for the engineers to recharge their creative energies.

“In Estonia we have this national trait of just getting things done,” says Tiit Paanenen, the site leader at Skype Estonia.

“I’ve tried to work out why this is and I think it’s because we are small. The circles working on the same subject all know each other, so you create this sense of accountability with each other. If you screw up everybody knows about it.”

Estonia itself was like an innovative startup, when it suddenly became independent in 1991, Paanenen explains. Old hierarchies were overturned and youngsters thrust into key political and business positions as the country built an economy from scratch.

“One of the results is that we are very competitive, because of the efficiency, because of the use of technology in the areas where otherwise you’d have a lot of overheads and waste,” the shaggy haired executive said in an interview.

“Estonia is bigger than its size already … we are making an impact in the world and it will continue.”

Editor's note: This article has generated extensive discussion: NY Times correspondent Paul Krugman weighed in with this post; the president of Estonia responded (agressively) on Twitter, and GlobalPost questioned Krugman's post here. Please let us know what you think.