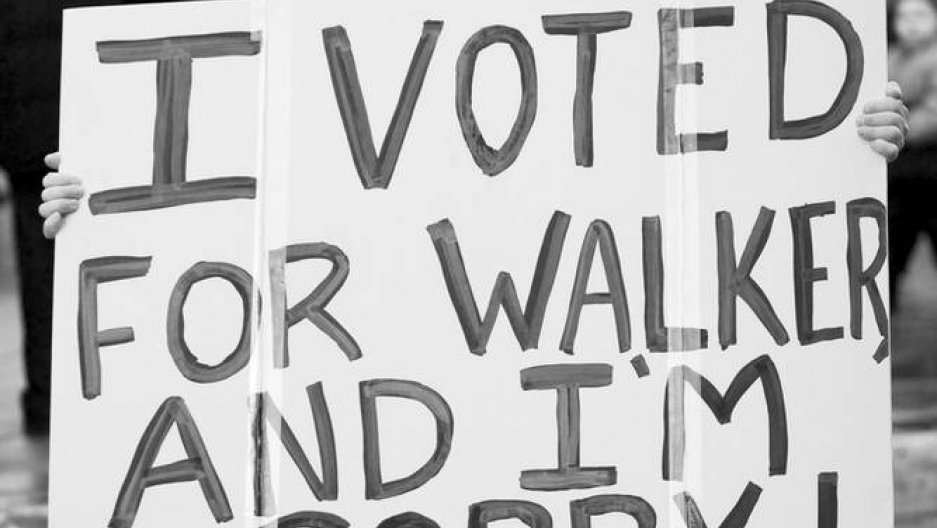 In the Winter of 2011, the "Recall Walker" campaign brought over 100,000 protestors to Madison. (Photo courtesy of Blue Robot/flickr).

A recall election of Republican Governor Scott Walker has put Wisconsin at the top of the national political agenda once again.

Voters head to the polls today to choose whether to retain Walker or install his Democratic challenger, Tom Barrett.

The recall campaign that divisively split Wisconsin has transformed the state into a battleground for Republican and Democratic interests. Today's election will cap off the most expensive campaign in Wisconsin history with more than $63.5 million flooding in, primarily from out-of-state sources.

The recall campaign has garnered national attention by being played by Republicans and Democrats as a microcosm of larger party issues in an election year. The effort to recall Walker began in February 2011 after the incumbent governor proposed cutting collective bargaining rights for public workers as a way to address budget shortfalls. The proposal sparked massive protests but was signed into law in March of that year.

"If you believe in an economy of shared prosperity when times are good, and shared sacrifice when they're not, then you don't want to break the unions," Clinton said. "You want them at the negotiating table and you trust them to know that arithmetic rules. Show up and vote for Tom Barrett on Tuesday."

For residents of Wisconsin, this election is the seventh in just 14 months. Martin Smith, a retired Democrat from Madison, said the campaign has been draining.

"Especially the ads," Smith said. "The ads have been very negative throughout all of these campaigns. This has been big time stuff. There has been as many ads as for the presidential campaigns."

Republican voter Clarence Kuehmichel, a retired firefighter from Elm Grove, Wisc., is opposed to the degree out-of-state funds have played a role in the gubernatorial race.

"I just think it became unbearable the outside money that has flown into this state vote on the Democrat and Republican side," Kuehmichel said. "You almost feel like we're up for sale, and that I don't like."

The amount of money channeled into Tuesday's election has far outstripped that of any previous state election. According to the Associated Press, Walker has spent $29 million to stay in office while Barrett has only pitched in $4 million. Walker has received massive funding from anti-union groups including the Republican Governors Association and billionaire David Koch.

Peter Barca, the Democratic leader in Wisconsin's State Assembly, likened the financial imbalance to a David and Goliath scenario. But Republicans including Kuehmichel don't think the Democrats are playing fairly either.

"I feel the recall itself is very inappropriate," Kuehmichel said. "[Walker] did not have any malfeasance of office, he did not have a felony charge. The other side, the Democrats, did not like his approach to what he did when he took office, and because there was no restriction in our recall policy, here they launched a recall."

Smith said he was surprised by the protests against Walker and thinks that response is indicative of what Wisconsonites want in a leader.

"There are no restrictions here in Wisconsin regarding the reasons for a recall. On the other hand, I've lived in this state for over 45 years and I have never seen an outpouring of response to a political situation since the student demonstrations in the late 1960s over the Vietnam War," Smith said. "The way that the business of government was carried out really set people wrong."

Supporters of Walker have targeted Barrett with criticism over the unemployment rate in Milwaukee, but Scott thinks those numbers should not be taken at face value.

"Facts are facts until you make them into statistics and then you get them to say whatever you want them to say," Scott said. "I don't know what the statistics say about either one of them. Their approach to government is totally different, and I think they probably reflect a lot of the divide in the country right now."