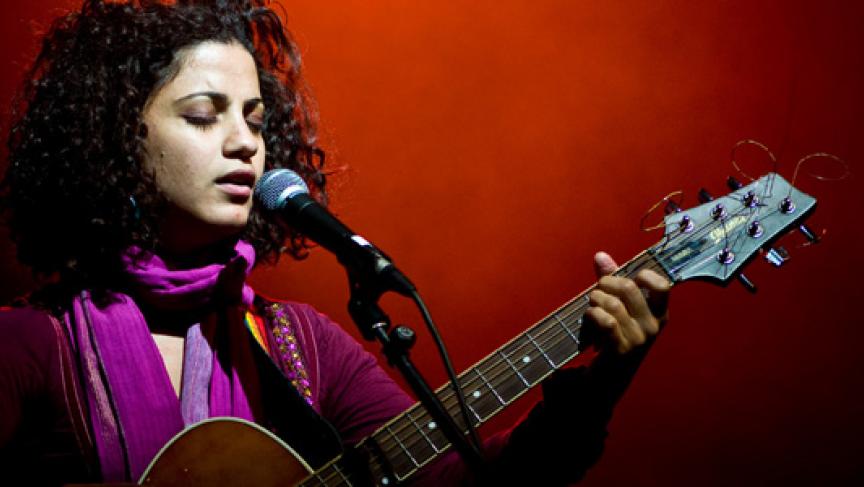 Share
Three years before Tunisia's uprising, the government censored the political songs of a young musician, Emel Mathlouthi. "I couldn't have festivals, I couldn't have TV or radio. So it was like, the biggest threat for the young musicians like me," Mathlouthi said. "So it was obvious to me to move to France." In Paris, Mathlouthi could express herself. At a huge concert at The Bastille in 2008, she sang "Kelmti Horra," (My Word is Free). "Tunisia was living inside of me in a very, very powerful way," she said. "Every time I heard about someone who was in jail in Tunisia I was crying. And I started writing and writing." And singing, in French concerts and on French TV and radio shows. And on the internet, which Tunisian censors did not follow closely at that time. "They never imagined that social media can lead (the) Tunisian youth so far, and can give them courage. On the internet you can always find a way, like to shout on the street." When Mathlouthi, in her late 20s, returned to Tunisia two years after she left, her concerts announced only by Facebook, were packed. "And suddenly everybody was standing and they were singing the song, by heart. So I stopped and I was crying on the stage, and I said, wow, power is to the youth, really. And we are starting to build something," she said. Mathlouthi said after Tunisians toppled their dictator, her song "My Word is Free," traveled from Tunisia to Egypt, to Libya, and Syria. She said she received a lot of messages from Egyptians and Syrians, thanking Tunisia for the revolution and for her song, because during the Tunisian revolution, they were listening to the song and it was giving them a lot of hope. Which brings us to today. Mathlouthi said in many ways, Tunisia's revolution has not solved the country's problems. "Fifty years of dictatorship, it made like a lot of corruption," she said. "So they are taking money, but they are not doing anything. In a way we can say that nothing changed, really." And there are some new concerns-now that democracy has ushered in Islamist leaders. "The problem is religion can stop the freedom of speech, can make a big threat to civil rights, to women rights," Mathlouthi said. And with the recent government turning toward censorship in Tunisia, she said her song "My Word is Free" is as important as ever.