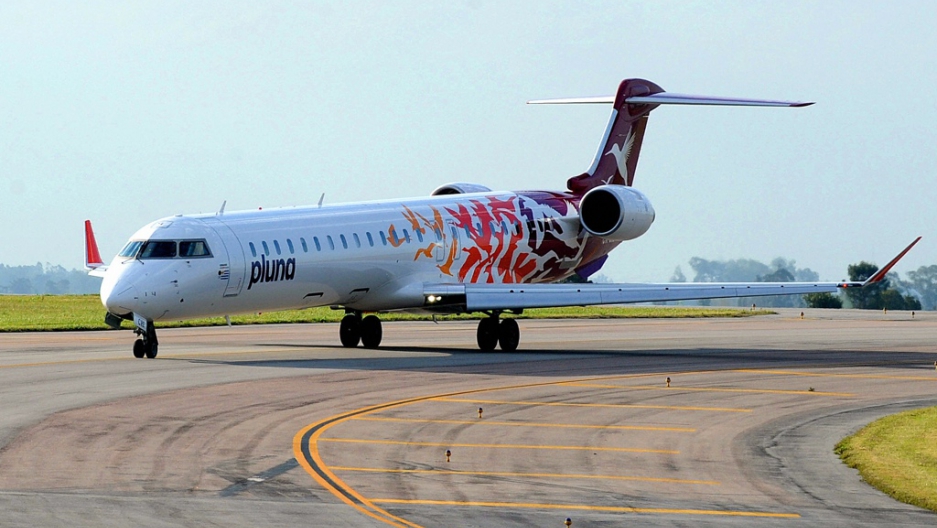 Its CEO Matias Campiani sent his employees a letter (made public on Monday, according to The Associated Press), cluing them in on what they might have already guessed: "We're going through strong turbulence."

In May, Reuters reported Pluna had posted a loss of $18 million in the eight months through February.

"All the aviation in our region is suffering from big problems, due to the major slowdown of economies that were growing at gigantic steps and now have stopped," Campiani wrote.

To further cloud that scenario, add fuel price woes and tough competition with subsidized airlines of neighboring Argentina, Brazil and Chile that fly around South America.

Argentina is also accused once more of unfairly protecting its own national interests. It has restricted flights to Argentine airports by carriers other than its own domestic firms — going against a South American trade deal, AP points out.

The article adds that Pluna is also caught in a price war, including big companies like Aerolineas Argentinas and Brazil’s TAM seen cutting prices to compete with Brazil's low-cost flyers.

Campiani makes a plea to the government to provide a cushion, or else "everything we built will collapse."

At least one politician has replied. Luis Alberto Heber, leader of the National Party, told Uruguayan television’s Teledoce said nobody wants to see Pluna go under, and Campaini should take legal recourse, and not simply tell the public the company's woes.

One-quarter of Pluna is owned by the Uruguayan state while the remaining is owned by investment fund Leadgate, but the government is seeking new private partners, Reuters reported.

Uruguay’s name rarely pops up in the news. That’s partly because it’s so darn stable, topping the charts across a number of social and economic indicators.

Between 2006 and 2011, Uruguay’s real gross domestic product growth averaged 6 percent per capita, according to a report by Standard & Poor’s Rating Services.

In April, S&P’s raised the little country to the coveted investment-grade level. In S&P speak, it upgraded Uruguay to "BBB-" from "BB+" “on increasing ability to withstand external shocks; outlook stable.”

The firm’s analyst Sebastian Briozzo said in a statement: "The upgrade is based on Uruguay's sound economic growth prospects and improving external and fiscal indicators, as foreign direct investment strengthens and improves economic diversification."

Uruguay's flagship carrier Pluna hasn’t been winning such praise as of late.

For the clincher, per AP, Campiani wrote to his staff: “don’t forget to smile for our passengers.”