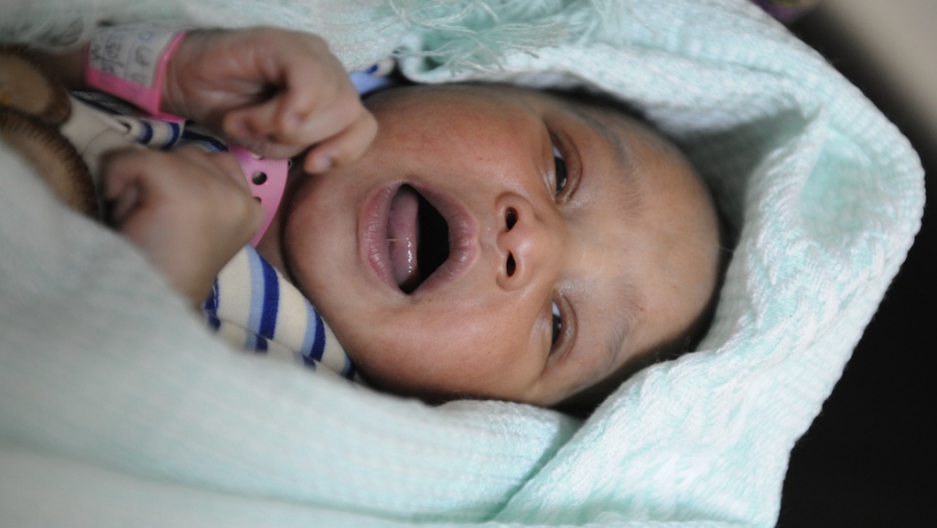 ABUJA, Nigeria — Nigeria is struggling to drastically improve health care for mothers in childbirth, but the country is confronted by many obstacles.

A United Nations report released May 16 called “Trends in Maternal Mortality: 1990 to 2010,” showed that 14 percent of the world’s deaths related to childbearing are in Nigeria. Now Africa’s most populous country, with 160 million people, is working to cut the maternal death rate in half by 2015.

Franca Amaechi, a mother of three, said many women in Nigeria die from childbirth simply because they don’t know how dangerous it is to have babies without medical supervision. But, she added, awareness campaigns are starting to filter into the public consciousness.

“We hear it all the time,” Amaechi told GlobalPost. “We see the advertisements on TV. Even if you don’t have a television at home to watch you see people walking around telling people that [having babies at home] is not good."

United Nations Children's Fund health specialist Esther Obinya said her organization, the Nigerian government and several other non-governmental organizations are trying to tell as many Nigerians as possible that lives can be saved when babies are born in hospitals. But ignorance is not the only cause of Nigeria’s high maternal death rate, according to Obinya.

While maternal death rates around the world have almost halved over the past two decades, according to the UN report, Nigeria’s rate — 630 deaths for every 100,000 live births — is the world’s 10th highest, behind nine other sub-Saharan African countries led by Chad and Somalia.

Obinya said poverty, isolation, traditions and lack of access to health care are among the other causes for the high death rate of women during childbirth.

If a woman from a poor village starts to bleed excessively during childbirth, she has only hours to live without emergency medical treatment, Obinya said. In many remote villages, she said, modern transportation is not always available and even if it is, many women can’t afford to pay the fare.

“Even getting from her home to the primary health care maybe a big problem,” she told GlobalPost. “She goes on a camel. She goes on a donkey. She’s carried by hand on a motorcycle.”

Obinya said even those who make it to the hospital on time might not be able to get emergency treatment.

Mothers also die because child marriage and pressure to have many babies are common in some parts of Nigeria, Obinya said. Young girls often are too small to have a healthy birth and women who have children in quick succession become run down.

Traditional birth attendants with no medical training often care for the women and sometimes use dangerous practices like attempting to force a baby out of the mother by pressing her stomach with a stick, or making her vagina larger with a knife.

More from GlobalPost: Maternal health and rural development in Nepal

In Nigeria, abortion is illegal, except when the mother’s life is in danger, Obinya said. Young women frequently die from illegal abortions done by back-room doctors who perform the surgery and scoot them out the door without proper care.

Hellen Akujohnson, a teacher and mother of four, said, like almost all of Nigeria’s problems, the dangers of giving birth are also related to corruption and lack of available electricity power. Even if a hospital has the expertise and equipment, she said, it might not have the electricity to use the equipment or even to see the patient in the dark.

Low-level corruption in hospitals also keeps women from seeking help before they desperately need it.

Akujohnson said in her area the government promised free care for pregnant women and their babies until they are 5 years old. In most local public hospitals, however, workers fleece patients for illegal fees.

“They extort money from them,” she told GlobalPost. “Whereas it’s supposed to be free for these women.”

Obinya said efforts to drive down the maternal death rate also include hospital reform, training for traditional birth attendants and community programs. For example, some villages have set up a communal fund to pay drivers to bring women to the hospital in an emergency, even if she doesn’t have the cash on hand.

Dr. Habiba Suleiman, a general practitioner with three children, said to improve health care in Nigeria, doctors also need to get paid enough to stay in practice. In early May, Nigerian officials fired nearly 800 doctors who were on strike against low wages.

Medical professionals should also be given financial incentives to work in the countryside, where there is usually an acute shortage of care, Suleiman said.

Training more women to be doctors, she added, would ensure that health care professionals and eventually the entire system was more sensitive to the needs of mothers.

“They say if you educate a female, you educate a nation,” she told GlobalPost. “That knowledge will be there so they will be able to avert most problems that are faced during child bearing.”