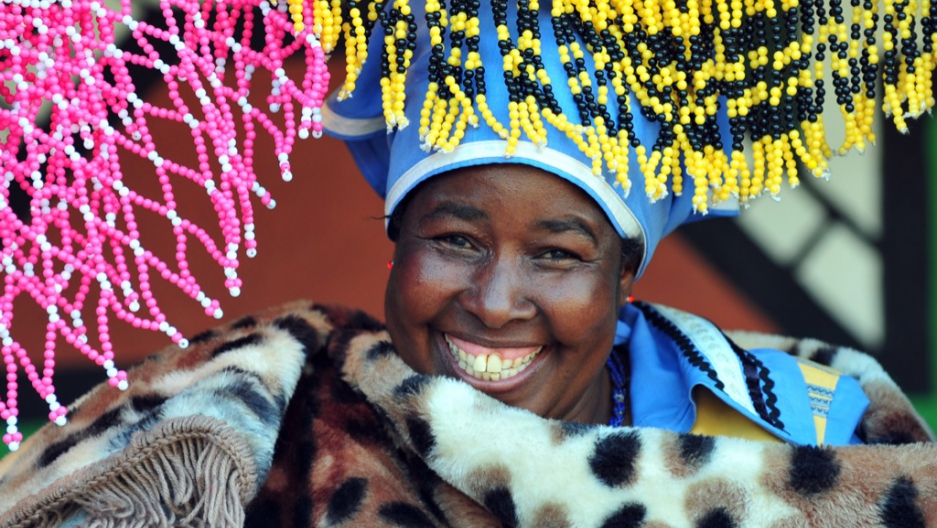 A South African vendor smiles at the Lesedi Cultural Village in Johannesburg on June 23, 2010, one of the nine cities across South Africa hosting the 2010 World Cup football tournament from June 11 to July 11.
Credit: MUSTAFA OZER
Share

JOHANNESBURG, South Africa — Compared to the usual standards of reality television, a new show on South African TV has an impressively lofty mission.

“Big Break Legacy” aims to entertain, of course: A dozen entrepreneurs are competing “Apprentice”-style to win a 5 million rand prize (about $650,000). But more than that, the show intends to “contribute towards the strengthening and growth of South Africa’s economy,” its creators say, by teaching viewers about starting a business.

The show has tapped into one of the biggest issues in South Africa today: the jobs crisis. Unemployment runs as high as 40 percent, when the discouraged are included, and there is mounting frustration, and desperation, among the country’s jobless youth.

President Jacob Zuma’s government is under huge pressure to create employment, having promised to reach a target of 5 million new jobs generated by 2020. But most of the emphasis has been on government-created work.

In his State of the Nation address this year, Zuma focused on job creation through infrastructure investment and state-owned firms, without talk of boosting small and medium-sized enterprises. Some South African business leaders questioned his commitment to supporting the private sector.

Entrepreneurs are “absolutely vital” to the South African economy, given a decline in jobs created by established firms, said Mike Herrington, director of the University of Cape Town’s Center for Innovation and Entrepreneurship.

Nearly half of all jobs in South Africa are through small businesses, he said.

In addition to its emphasis on economic growth, “Big Break Legacy” hits another nerve in South Africa: the dream of getting rich. That’s top of mind in a country where until recently wealth was tied to race, and which has one of the world’s largest gaps between rich and poor. High-flying businessmen and politicians regularly flaunt their success with fast cars and flashy watches.

Many South Africans are increasingly angry about the phenomenon of “tenderpreneurs” — politically connected individuals who land lucrative government tenders in rigged competitions.

“Tenderpreneurism” has threatened to corrupt the meaning of being an entrepreneur, putting the focus on using connections to land a government contract to build a road or building rather than developing a successful business from the ground up.

While South Africa is the continent’s largest economy, with a GDP of $364 billion, true entrepreneurial activity is less than in many other emerging economies, including other African countries.

“As South Africa, we have a long way to go,” said Dumisani Mpafa, a founder of SMME Business Solutions and board member of the Black Management Forum.

“Our entrepreneurial culture was destroyed by apartheid. You were actively discouraged as a black person from starting a business,” he said.

The culture of entrepreneurism needs to be re-established, and this requires better education, mentoring and cooperation between government and business, said Mpafa.

In his view, South Africa must focus in particular on innovation and technology, developing high-tech, value-added exports to follow in the footsteps of the “Asian Tiger” economies such as South Korea that went from rags to riches starting in the 1960s.

Even since the end of apartheid, South Africa’s government has failed encourage small businesses, said Herrington, of the University of Cape Town. For example, it takes on average 19 days to register a new business, compared with six days in Mauritius, the African island nation that is often praised for its successful economy.

In addition to this red tape, it can be extremely difficult for start-ups to get financing, with banks reluctant to take on risky ventures and inexperienced entrepreneurs unaware of how to put together a proper business proposal.

“Some of the agencies tasked in helping small businesses are inefficient, bureaucratic and nepotistic,” Herrington added.

Another major problem is the lack of good quality public education. South Africa ranks 133 of 142 countries for the quality of its education system, below countries such as Ivory Coast and Burkina Faso, according to the World Economic Forum' s 2011 Global Competitive Index.

Nearly two decades after the end of apartheid, black South Africans continue to play only a minority role in the economy.

Frustrated by the lack of change, an organization representing black-owned businesses in South Africa split off last year from a racially unified group created in 2003. Patrice Motsepe, the richest black South African, is the new chairman of the Black Business Council, formed to increase the participation of black people in the economy.

The group urges the creation of a black venture capital fund to ensure finance and increased training for entrepreneurs.

“And I mean a real revolution, not a tinkering around with the current institutions, platitudes and paltry support for small business and entrepreneurs,” said Feinstein. “We need a comprehensive entrepreneurship and small-business development strategy.”