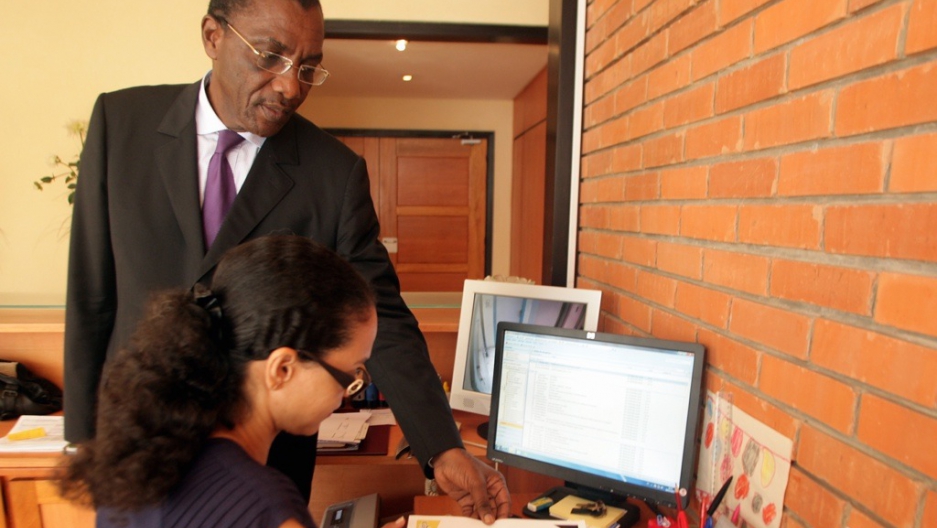 ABIDJAN, Ivory Coast — For much of the past decade Ivory Coast has not been on anyone’s list as an ideal investment destination. Civil war tore the country apart between 2002 and 2004 and then there was renewed violence last year following the presidential election.

Now, a year after the country returned to peace, financier Michel Abrogoua is hunting new investments to help return the war-torn economy to prosperity.

“You have investors that are coming because they trust President Alassane Ouattara himself and also the government,” said Abrogoua from a conference room on the top floor of a high-rise in Abidjan. “It’s something people are betting on. They say, ‘Despite what we hear here and there, we think there is hope.’”

Ivory Coast’s strong infrastructure, tradition of good governmental administration, and existing industrial sector are attracting investors, he said. And given the poor economic climate in the West, many investors are looking to riskier markets with high potential for growth in the developing world.

Abrogoua, 59, the founder and CEO of Phoenix Capital Management, a licensed stock brokerage and investment bank, has come a long way from a middle-class family thanks to a far-sighted program by Ivory Coast’s founding president, Félix Houphouet-Boigny, who established government scholarships to allow talented students to study overseas.

Abrogoua won one of those scholarships and earned an MBA from Adelphi University in New York in 1980. Like many others with those scholarships, Abrogoua became part of a cadre of well-educated Ivorians who are putting the country’s economy back on track. The scholarship program is credited with endowing the country with a group of educated entrepreneurs who have made Abidjan the financial hub of West Africa.

“Three years later I was invited … to set up a similar fund for the central Africa region, called the Central Africa Growth Fund. I was chairman there and managing director here,” he said.

Now, as the CEO of Phoenix Capital Management, which he founded in 2005, Abrogoua advises the Ivorian and other regional governments on major infrastructure projects in the telecommunication and energy sectors.

Abrogoua said the greatest hindrance to entrepreneurs is the lack of financing for small and medium enterprises.

“The commercial banks are not well-equipped to address these limitations, both in terms of resources and expertise,” said Abrogoua. So last year with $50 million he launched a regional private equity fund called the West Africa Emerging Markets Growth Fund “to provide equity resources to small and medium-sized companies operating in the region.”

From the 1960s through most of the 1990s Ivory Coast was West Africa’s most prosperous and stable country. However, after the death of Houphouet-Boigny in 1993, Ivory Coast entered a period of extended political crisis that led to the civil war. The uncertainty and conflict hindered economic development and scared away investors, Abrogoua said.

“While Africa has been perceived over the past decade as the next investment frontier, Ivory Coast did not really benefit from new investments,” said Abrogoua. Following an attempted coup d’état in 2002, the country underwent a de facto split between a rebel held north and the government-controlled south.

“The risk was, security-wise you could not rely on anybody. In a normal situation you have strong legal security that you can rely on as an investor, but in this specific situation like the one we had … You are left to yourself. You cannot go to the court. You don’t have anybody to protect you, and for an investor this is the worst situation,” said Abrogoua.

The crisis reignited following the November 2010 presidential elections when former President Laurent Gbagbo refused to concede defeat and a six-month power struggle ensued. The country teetered on the brink of civil war, but luckily, said Abrogoua, “the key points of activity: the factories, transportation and energy production infrastructures remained intact,” which has allowed a quick recovery of economic activities when the fighting ended in April 2011.

Despite sporadic incidents of violence, mainly between the military and civilians, which continue in many parts of the country, Abrogoua is optimistic.

"[Ivory Coast] is on the path to recovery. The rate of growth is expected to reach 8.5 percent this year,” he said. “The country's entrepreneurs are already working to spur economic growth.”