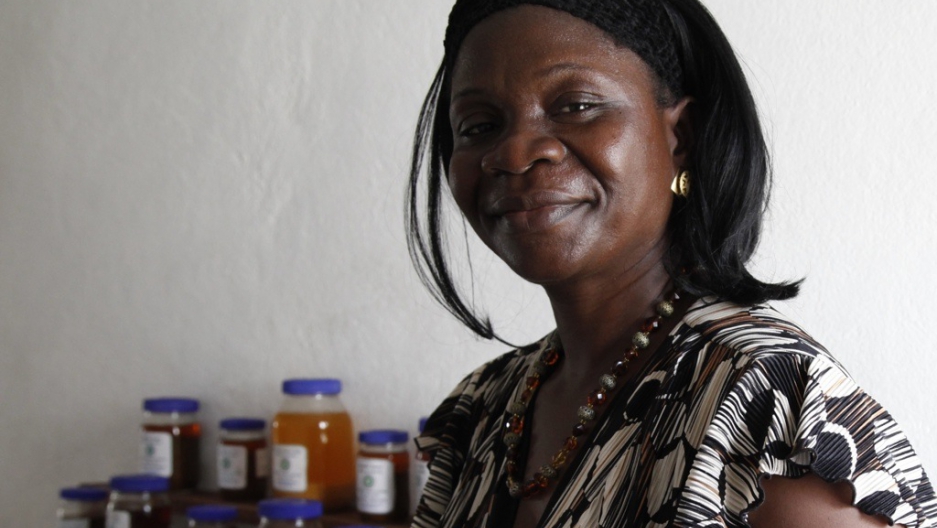 MONROVIA, Liberia — On the outskirts of this capital city, Martha Partor runs what passes for a food processing business in this war-weary west African nation.

It’s not high tech or big business. She packages local agricultural items such as pepper sauce, cassava leaf flour and potato greens powder in vacuum bags that are sold at local supermarkets.

Partor, 50, is one of a few Liberians to venture into this time-intensive trade. She has been doing it for almost two years and is still struggling to make it in a country where starting a small business is a particularly hard slog.

“I’m still trying to get my feet off the ground,” says Partor. “I’m still looking for what it will take me to really say, ‘I’m into business.’”

Partor, like many Liberian entrepreneurs, is held back by the poor state of Liberia’s economy.

More than two decades of political upheaval and a civil war that ended in 2003 reduced this tiny country of 4 million to an economic basket case. The war left almost all of Liberia's infrastructure in ruins, and paltry resources to address its shortcomings.

Under President Ellen Johnson Sirleaf, a former World Bank economist and Africa's first elected woman leader, there has been progress.

More from GlobalPost: NY fashion, straight out of Kigali

Liberia achieved a growth rate of 6.9 percent in 2011, but the GDP remains miniscule, at $1.2 billion, that ranks it 171 out of 191 countries, according to the CIA World Factbook.

Endowed with water, minerals and a tropical climate, Liberia’s potential for economic development is good. Agriculture accounts for 76 percent of GDP, with industry at 5.4 percent and services at 17.7 percent.

But the economic growth is not sufficient for small entrepreneurs, according to Sam Mitchell, former president of the Liberia Business Association and owner of the Corina Hotel in Monrovia.

Postwar Liberia suffers 85 percent unemployment, so many are forced to create work for themselves without any training or skills.

Most Liberians do petty trading — small-scale selling of goods and services, barely earning enough to sustain a family. Few have any idea how to build a profitable business that will weather economic downturns.

“Many of our women in Liberia don’t really know about business — how to move from petty traders to become entrepreneurs,” said Josephine Wallace Flomo, business advisor of “10,000 Women,” a project backed by US banking giant Goldman Sachs to help build the capacity of women around the world.

“So we give them these skills to help them become better business people, to help build up the society and to help employ more young people who are unemployed,” said Flomo.

Partor, who is in the current class of the 10,000 Women program, returned to Liberia after two years as a refugee in Guinea, where she came up with the idea for combining microenterprise and empowerment.

“The intention of this thing is to employ women and to help them become self-employed and to train them into what we are doing, so that they can become sustainable tomorrow,” says Partor. “But all of these things are not put in place yet because of the lack of funding.”

Partor says she desperately needs more equipment because currently most of the work is done manually.

“We need some machines; we have two sealing machines,” says Partor. “If one breaks down, we don’t know what we are going to do next.”

Finance in the form of microcredit is a major challenge. Many banks require collateral that ordinary Liberians do not have, so they are treated as high-risk borrowers.

With a weekly income of $25 to $50 before expenses, Partor has yet to make a profit from her business. She blames unemployment, which prevents many Liberians from having money to buy her products. As a result, she cannot afford to pay her employees a regular salary.

“I have a lot of these women — they are almost receiving nothing,” she says. “The stipend we give them is like peanuts money at the end of the month, and it is not even regular.”

The unreliable power supply in Liberia is also a considerable obstacle for small-scale businesses. Partor depends on small 3.5 kilo volt generator to run her enterprise.

“If the generator does not have gasoline, you cannot do the sealing and you can’t do other things you have to do,” says Partor.

Education poses another challenge. A generation of Liberians missed out on schooling during the war. The education system is still in need of wholesale reform, experts say.

Businesswomen like Geneva Garr, 37, a tailor who runs a clothing business, would like to see educational institutions provide skills training in specialized areas.

“The universities only teach for the office, so when you graduate you can only apply for an office job,” says Garr.

Partor says she is confident that her business will grow to a level where she can give her workers a salary instead of a stipend and employ even more people.

“I’m not deterred,” she says. “I’m going on because I believe in encouraging myself that it is going to be better someday.”

Wade Williams is an editor at FrontPage Africa newspaper and a fellow of New Narratives, an NGO supporting independent media in Africa. New Narratives receives funding from Goldman Sachs Gives.