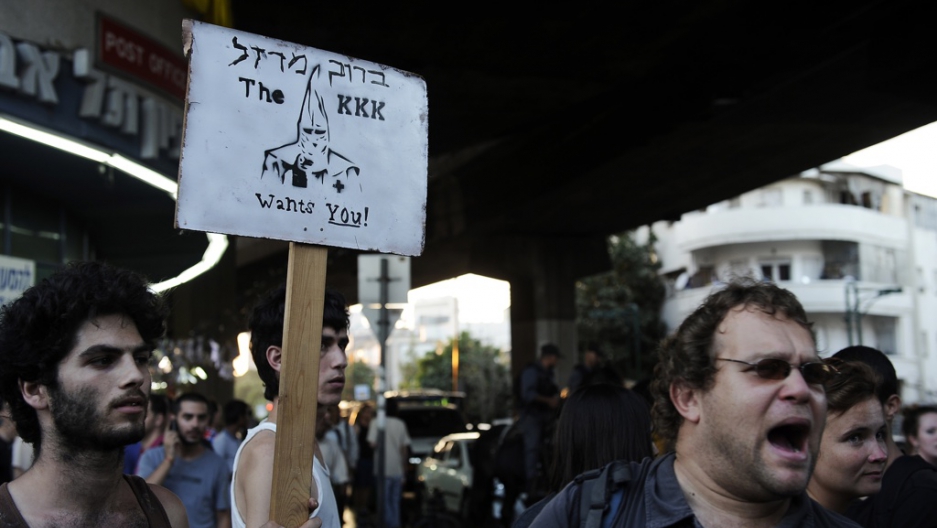 Left-wing Israeli protesters raise a sign picturing a member of the Klu Klux Klan (KKK) in opposition to a right-wing demonstration against African migrants in the city of Tel Aviv on May 30, 2012.
Credit: David Buimovitch
Share

According to a report in the national Haaretz newspaper, Prime Minister Benjamin Netanyahu on Sunday ordered his government to speed up plans to deport 25,000 illegal immigrants from Ethiopia, Ghana, Ivory Coast and South Sudan and to build a holding facility in the desert for asylum seekers from Eritrea, Somalia and Sudan.

"Whoever can be sent away should be sent away from here as quickly as possible," Netanyahu reportedly told cabinet ministers.

Israel is home to around 60,000 Africans, a mixture of economic migrants from poor nations and refugees from repressive countries.

In this BBC report, an elderly Israeli man advocates the shooting dead of illegal migrants while a young woman accused African migrants of sexual harrassment, criminal behaviour and, of course, of taking all the jobs and houses. A ruling party politician described migrants from Africa as "a cancer" while others regularly describe them as "infiltrators."

Tensions between Israelis and the country's African migrant community have been building for months. In December Israel announced a $160 million fund to block illegal immigration and last month violent riots erupted during an anti-immigrant protest in Tel Aviv.