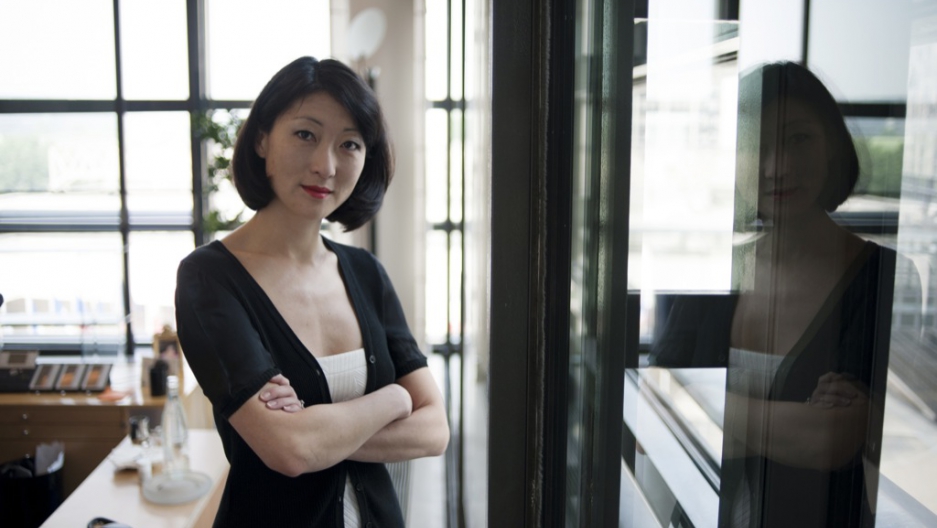 French Junior Minister for SMEs, Innovations and Digital Economy, Fleur Pellerin poses at her office in Bercy on May 24, 2012 in Paris.
Credit: FRED DUFOUR
Share

LONDON, UK — When newly-elected French President François Hollande appointed Korean-born Fleur Pellerin as digital economy and innovation minister, there were ripples of approval both for his promotion of ethnic diversity and his recognition of the internet’s importance.

Pellerin’s story is an encouraging one: she was adopted by a French couple and educated at some of France’s top schools. But critics say her role sends mixed signals, suggesting that Hollande, like his predecessor, fails to appreciate the importance of the internet to economic recovery.

France’s financial prospects for the next few years could depend greatly on a digital sector that has defied the downturn in recent years.

The country has one of Europe’s more progressive internet economies thanks to strong broadband penetration and a flourishing online media community. It is home to digital titan Vivendi, the world’s largest publishing company and video gaming giant Ubisoft. Last year Google demonstrated its Gallic commitment by spending a reported $134 million on swank Paris digs known as the “Googleplex.”

And the stats underscore tech’s importance. According to business advisory firm McKinsey, the internet contributed 10 percent of France’s growth in 2009-2010, even higher than in the US, where the figure was 8 percent. In 2009, the sector contributed 3.1 percent of GDP. Over the past 15 years, it has also created 700,000 jobs — sorely needed in France, as in most of Europe.

Having a digital minister, therefore, sounds like smart thinking. And as the woman who managed the online campaign that helped Socialist Hollande unseat Nicolas Sarkozy as president, 38-year-old Pellerin seems like a reasonable choice.

However, on closer scrutiny, both Pellerin’s career and the way Hollande has structured her portfolio suggest that she may not end up having much impact, calling into question whether Hollande understands the importance of the internet as he seeks stimulus measures to steer France from economic doldrums.

Prior to her recruitment by Hollande’s campaign team, Pellerin worked as a civil servant whose main link to the digital world was through the regulation of online casinos. As such, she was seen as an “outsider” in internet circles, albeit one who quickly proved her capabilities.

“She did not come from this digital world, but she has been accepted during the six months she worked with Hollande’s team,” said Professor Cédric Manara, an expert in online law at EDHEC business school in Paris. “But no one expected she would become part of the government.”

And even though Pellerin is indisputably an able technocrat who can turn her hand to anything, Manara suggests she is there simply to make up the numbers: She ticks the digital box, and helps Hollande meet socialist expectations of a quota of unelected “civil society” ministers.

Moreover, Pellerin’s position doesn’t exactly carry the political power that would seem intrinsic to a sector so important in France. She is a “delegate” minister, in charge of a junior department; her purview is restricted to following commerce ministry orders. Her power in the digital world is further hobbled by the fact that non-business related online affairs are handled by the culture and communications ministry.

“It would not be well accepted if there was no mention of digital in portfolios of the ministers and that is why she is there,” Manara told GlobalPost. “She has a limited competence, she is only a delegate minister which means she can only work on things she’s asked to do.”

Crucially, this means she has no say over “HADOPI,” a divisive copyright law that severs internet access to users found accessing pirated content.

This hasn’t stopped her from wading into the debate on the subject with comments that have already landed her in hot water.

Soon after taking office, Pellerin said in an interview that HADOPI  — whose opponents view it a barrier to free speech — would be reviewed within six months. Her claim was quickly shot down by Culture and Communication Minister Aurélie Filippetti.

This, says Manara, indicates that Hollande’s administration has inherited confusion over the division of digital roles from Sarkozy, and highlights Pellerin’s potential vulnerability when the cabinet takes more cohesive shape after June parliamentary elections.

He added: “It might have been a political misstep. She probably spoke about some things she’s not entitled to speak about. And the fact that the minister said ‘we won’t review it’ shows that either Pellerin does not have a strong voice or will not stay long in the government.”

It is likely that Hollande’s wranglings with German Chancellor Angela Merkel over the euro zone’s future have left him too busy to pay attention to the digital economy. His predecessor can unwittingly be credited for fostering some of this digital growth after creating the NationalDigitalCouncil. What Sarkozy essentially envisioned as a tool for calming the “uncivilized” internet inadvertently became an online hub for digital affairs that, to some extent, has helped compensate for weak government policies.

By relaxing bureaucratic hurdles and introducing tax breaks to encourage new businesses in the early days of his presidency, Sarkozy also improved prospects for internet start-ups.

Sarkozy also had his own digital minister in the shape of Eric Besson, a politician of flitting allegiances who handled the job before and after an unpopular stint as immigration minister.

Last May in Paris, Sarkozy and Besson organized an “e-G8” forum, featuring internet players such as Google’s Eric Schmidt and Facebook’s Mark Zuckerberg. The event was supposed to demonstrate the president’s web credentials, but it was dismissed as a cynical gesture by some in the digital community.

“It was a big joke,” Nicolas Metzke, founder of software developers Mosaic Lab, told GlobalPost. “It was just politics and talk of how to stop piracy. No sincere interest in changing things.”

More from GlobalPost: Doomsday scenario for the euro zone?

To Metzke, Hollande appears to share Sarkozy’s political blindness toward digital’s potential to revolutionize a French economy still beholden to the inflexible working practices favored when manufacturing, agriculture and nationalized industries were the chief staples.

In contrast, Metzke is optimistic about Pellerin. Despite her limited powers, he says, she could be the person to help Hollande realize that there is a generation of success-hungry young people who aren’t interested in retirement ages and jobs for life. A new workforce that can put technology at the heart of France’s recovery.

“She’s a good choice. She’s clearly someone with fresh ideas, and is young enough to speak the same language and figure out how people in our environment interact. It is an attitude thing and Fleur Pellerin might have the attitude we need.”