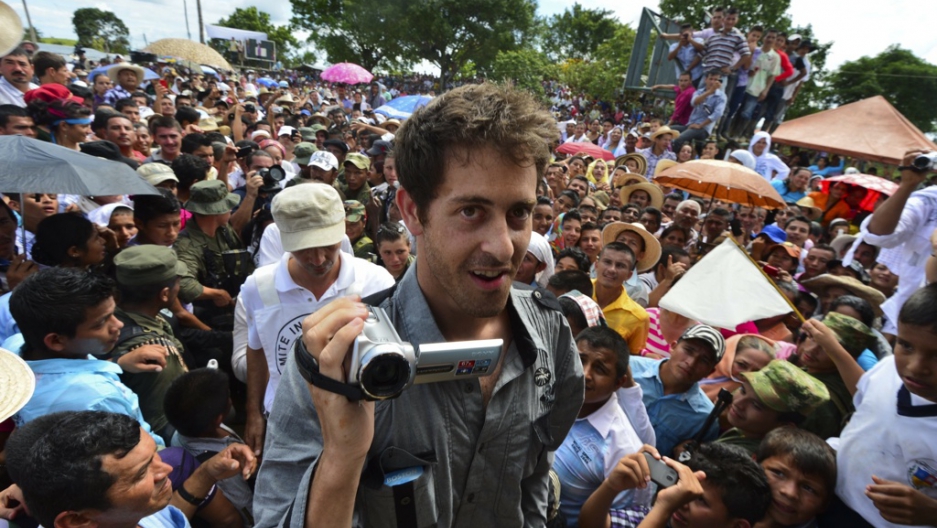 French journalist Romeo Langlois smiles and videos his hand-over from captivity by Colombia's FARC rebel group to a humanitarian commission on May 30, 2012 in the southern department of Caqueta.
Credit: Luis Acosta
Share

BOGOTA, Colombia — After being held captive in the jungle for 33 days, French reporter Romeo Langlois stresses the importance of covering an armed conflict he laments has been “very, very forgotten.”

Little did he know, his saga would put Colombia’s decades-old battle back on the map. Nor could he have predicted the FARC would make him a messenger for an appeal for international help brokering an end to the conflict.

On April 28, in the southern department of Caqueta, the Colombian elite military unit Langlois was accompanying on an antinarcotics mission came under heavy attack by the Revolutionary Armed Forces of Colombia, or FARC, killing three soldiers and a police officer. Langlois, 35, was wounded and taken hostage.

The insurgents have fought Colombia’s state security forces and paramilitaries for almost 50 years, and the government says the rebel force has thrived largely on drug money.

On Wednesday, the FARC delivered Langlois to a humanitarian commission made up of the International Red Cross, an ex-senator recognized for brokering hostage releases and a French government envoy. The hand-over took place in San Isidro, a hamlet just a few miles away from the April firefight.

Later in Bogota, Langlois described to reporters a harrowing several hours of intense combat, without “a stick to hide behind, nor a hole to hide in” from the bullets that dozens of guerrillas were firing. Langlois saw the sergeant tasked with protecting him shot dead barely two yards away. Then, a bullet hit Langlois just above his left elbow and shot out his forearm.

A correspondent for French TV channel France 24, Langlois started filming his heavily bleeding injury. But with his chances of surviving the shootout appearing as fleeting as the bullets zipping around him, he opted to drop his camera and remove the memory cards. Then he tore off his military-issued bulletproof vest and helmet and hit the ground, hoping the rebels would spare his life if they could recognize him as a civilian. He remained on the ground until he saw that guerrillas had spotted him. He rose up, putting his hands in the air while five guerillas drew their weapons on him. “I’m not military, I’m a civilian … don’t shoot me,” he cried.

The rebels treated his wound and detained him. They questioned his identity and accused him, in an early May communique, of lending himself to government propaganda by filming with the military.

The guerrilla force declared Langlois, who has covered the conflict for over 10 years, a “prisoner of war,” spurring an outcry from press freedom and human rights groups.

On May 9, a video taken by reporters emerged in which a FARC squadron commander identified Langlois as a journalist and said the rebels hoped they could quickly resolve the “impasse.”

Pressure mounted from the media and Colombian and French government for Langlois’ release. But it was not until May 13 that FARC officials said they intended to release the journalist with the help of a humanitarian commission.

As Langlois approached the delegation waiting for him Wednesday, he was surrounded by heavily armed guerrillas. Langlois finally had his arm of choice — a small video camera he said he had requested throughout his captivity — that he used to film his own liberation as he maneuvered through a crowd of hundreds of locals. A barbeque of cows slaughtered for the occasion awaited him, which coincided with the rebel group’s 48th anniversary.

Later, after hours of travel by road and plane, Langlois was welcomed after midnight at the Bogota home of the French ambassador, where a group of his friends awaited him. His spirits were high. He made humorous light of his experiences in captivity.

He recalled how a female guerrilla gave him a knapsack, toothpaste and rubber boots. He joked that this was his “kidnapping kit,” but the reality of his potential fate had begun setting in.

She also gave him a small radio with a string to carry it around his neck. Radios are a coveted item for hostages — some of whom have been held for up to 14 years. They listen for messages that relatives send via a program called “Voces de Secuestro,” or “Voices of Kidnapping.”

He apologized to his friends for deciding not to use the radio to listen to messages they had sent. Listening to that program, he explained, would make him consider himself one of the kidnapped — a fate he wanted to avoid.

The FARC has threatened and killed Colombian journalists, but had never taken hostage, nor killed, a foreign journalist. Reporters in Colombia often face various and grave risks.

Last year, one journalist was murdered, six survived homicide attempts and two were kidnapped, according to the Colombian Federation of Journalists.

FARC leaders pledged in February to stop the practice of kidnapping civilians for extortion.

Reading from a communique upon Langlois’ release, a FARC commander explained there had been confusion over Langlois’ identity and apologized for wrongly having declared the journalist a “prisoner of war.”

Langlois criticized the guerrillas’ use of him for their own political gain.

Langlois later said that it appeared within his first few days of detainment that the FARC planned to release him rapidly, but he was held unnecessarily as his case took on political dimensions. He said the FARC waited until France held their presidential elections before expressing intentions to release Langlois and requesting a French government envoy for the release. Langlois told GlobalPost he found himself in the midst of “political games” in which the French elections played a key role.

(Above, new French President Francois Hollande greets Romeo Langlois at the Elysee in Paris after the journalist's return to France on June 1.
Bertrand Langlois/AFP/Getty Images.)

The FARC sent French President Francois Hollande a letter with Langlois upon his release that Langlois says includes a call for international support toward a negotiated solution to the armed conflict. “They don’t think the Colombians can negotiate alone,” he told reporters at a press conference in Bogota Thursday.

The FARC has made several overtures over the past year indicating they want peace talks.

Langlois’ kidnapping has drawn attention to what he calls “an invisible conflict” — involving left-wing guerrillas, drug-trafficking groups borne out of rightist paramilitary groups, and state security forces — that has been widely regarded as diminished from its earlier years.

The FARC has seen its ranks drop by about half since 2002 to an estimated 9,000 fighters due to military offenses and desertions.

However, violence and conflict are prevalent in many rural parts of the country, and on the rise in several of them. The FARC has stepped up its attacks. Police suspect the rebels were behind a car bombing in Bogota that attempted to take the life of an ex-minister, but killed his bodyguard and driver instead. The FARC has not taken responsibility for the attack.

In late May, the rebels killed 12 troops in a brazen ambush on the border with Venezuela.

Langlois said he believes the FARC is interested in a path toward peace, but warned, “they are ready for war for another 50 years until they see the possibility for the kind of peace that they want.”