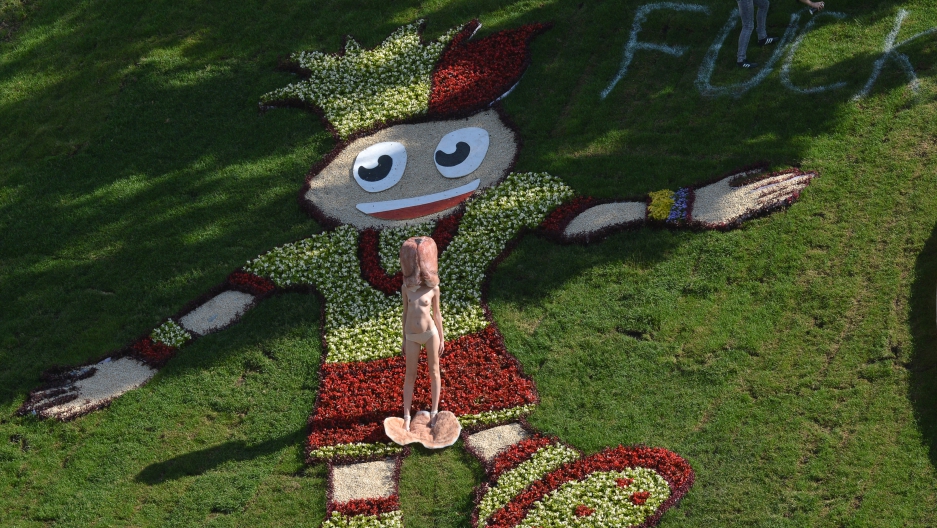 A FEMEN lady, in a penis costume, stands in the crotch of one of the Euro Cup mascots in Kiev yesterday. The message is subtle: "Take your penises elsewhere."
Credit: SERGEI SUPINSKY
Share

The feminist activist group FEMEN —otherwise known as the naked feminists or “topless warriors” — is at it again.

Their latest protest, Thursday in Kiev, was held to oppose the staging of the Euro 2012 soccer championships in the Ukraine.

More precisely, they protested the probability that soccer fans will come to Ukraine looking for sex-tourism, Gazeta reported.

Naturally, and as always with the FEMEN ladies, the protest happened in the nude. Well, if you don‘t count the penis hat and granny panties.

The women of FEMEN, whose mantra is “Came, Stripped, Conquered,” dressed up in penis costumes and stood on a flower bed, strategically positioned between the legs of the soccer championship mascots Slavek and Slavko.

Yes, with Slavek and Slavko in a horizontal position, the ladies standing in their crotch area did manage to look like erect, uncircumcised penises.

This protest is just another one in a series planned against the soccer championships by FEMEN.

A couple of weeks ago, one of the FEMEN ladies stole a Euro 2012 Cup trophy, also to protest sex tourism:

When I reported from South Africa before the World Cup in 2010, some 40,000 sex workers were expected to cater to the fans. At the end of the day, that number proved to be exaggerated.

But sex tourism at the Euro Cup could be a completely different beast in Ukraine.

Perhaps no other country has — tragically enough — became synonymous with prostitution quite the way Ukraine has.

A Ukrainian friend of mine says she has trained herself to routinely lie when people ask her where she is from. “If you say Ukraine, they automatically think you are a hooker,” she says. “Then they start telling me not to get offended because it’s true that a lot of prostitutes are from Ukraine. It’s always the same story. I’m tired of it.”

Ukrainian women have been collectively living with this reputation since the fault of the Soviet Union, some twenty years ago.

Two decades is probably long enough to make anyone put on a giant hat and stand in someone’s crotch.