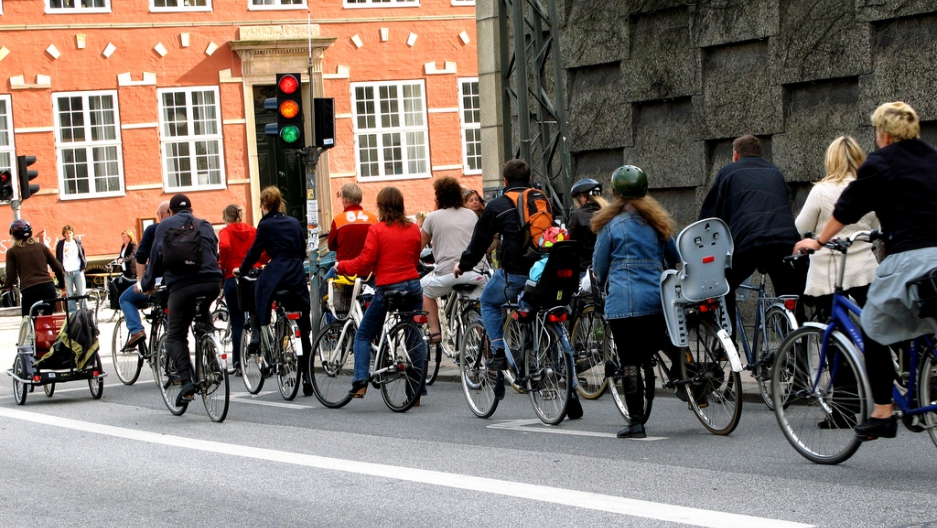 Bicyclists ride during rush hour in Copenhagen, Denmark, where bike ridership is decreasing. (Photo by Mikael Colville-Andersen via Wikimedia Commons.)

Biking is considered a way of life in Denmark, but bike ridership in Copenhagen, the capital, is actually decreasing.

In Copenhagen, there are 217 miles of bike trails. About 25  miles of tree-lined cycle routes cross through the city center. They’re reserved only for bikes and pedestrians; there are plans for even more.

“There's very few places in the world where there's a mandatory helmet laws, but the simple promotion of them — suggesting that people wear them — we've seen this in every region of the world where helmets have been promoted, that cycling levels fall,” Colville-Anderson said.

American children are trained to always wear bicycle helmets. The evidence showing their benefit in a crash is clear. Still, when it comes to bike helmets, the nation is divided: about half of Americans wear them, half don't.

In 1989, Johnson and Johnson funded the Safe Kids Campaign and made bike helmets a national issue. The campaign forced parents to consider some gruesome statistics and the push worked. Bike helmets became standard.

Since then, helmets have grown up quite a bit.

“We called them hairnets because they were strips of leather-covered foam and they looked kind of like a hairnet. And that’s about all the protection they gave you,” he said.

Swart was involved in developing the national standard as part of the helmet committee of the Washington-area Bicycle Association in 1974.

By 1999, the Consumer Product Safety Commission adopted a U.S. national standard, which became the law for all helmets sold in the U.S. It specified how much of the head needed to be covered and the force the helmet could withstand. Today, whether you buy a $30 or a $300 helmet, they perform exactly the same, Swart said.

In 2003, the tragic death of professional cyclist Andrei Kivilev pushed bicycle safety into the spotlight once again.

In the wake of the tragedy the Union Cycliste Internationale (UCI), which oversees the biggest cycling competitions, decided to require wearing helmets, even at the professional level.

Earlier efforts had been defeated by riders; citing drag, discomfort and personal choice. But after Kivilev’s death, the rule stuck. But would it have saved him?

“If the speed, and therefore the force of the impact is too elevated, then even such a protection as this may not be enough to save a life," he said.

On a downhill, pros can reach 65 mph. It’s unlikely that the average rider will reach a bike speed that high, but a study published in the June issue of the American Journal of Public Health confirmed that wearing helmets makes regular cyclists ride a little faster than when they aren’t wearing one.

Traffic safety researcher Scott Osberg said children especially might take more risks when wearing a helmet, since they feel they are safer.

Fifteen years ago, Osberg wrote a paper that compared bicycle safety in helmet-prone Boston to helmet-averse Amsterdam — and found the death rates in the Netherlands to be significantly lower. He credited Amsterdam’s pro-cycling culture as one of the main factors: there’s safety in numbers.

“I really believe there’s a theory that there’s a critical mass of bicyclists that, once you get up to that point, car drivers become more aware, they expect to see bicyclists and they drive more carefully,” he said.

Another study, funded by England’s Engineering and Physical Sciences Research Council, shows that cars are twice as likely to drive close to a helmeted biker than a non-helmeted one. The English researcher running the study was actually hit twice while gathering his data. Both times he was wearing his helmet.

Osberg said if he could change one thing to make bikers safer it would be to change the infrastructure so it is safer for cyclists. Swart avoided the obvious solution.

“Well, the obvious answer if you’re the Director of the Bicycle Helmet Safety Institute is going to be helmets. But instead I would say that the best thing you could do to make us all safer is to increase the number of people out there riding," Swart said.

Both Osberg and Swart agreed that it is important to wear a helmet, but said that ultimately, getting more riders out on the streets will provide a safer environment for cyclists.