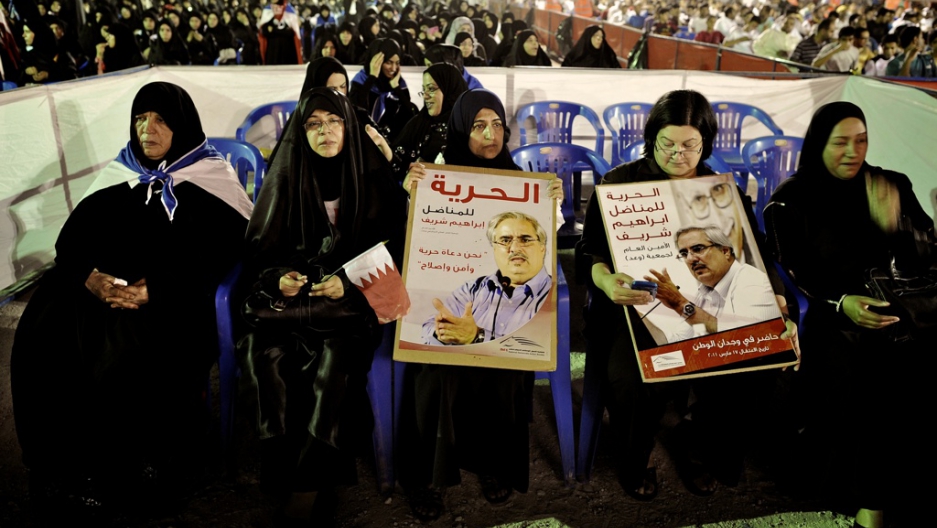 Bahraini Shiite Muslim women hold posters calling for the release of jailed opposition leader Ibrahim Sharif during an anti-government rally in the village of Muqsha, west of Manama, on May 21, 2012. Sectarian tension keeps rising in the tiny Gulf kingdom as the Shiite majority continues to call the ruling Sunni dynasty for political and social reforms.
Credit: Stringer/
Share

NEW YORK — “Of course we have free speech in Bahrain,” the official told me. “But you cannot ask to change the government — that’s a crime.” While it was striking to hear a government representative speak so candidly, it wasn’t exactly news.

Having extensively researched criminal trials in Bahrain, the island nation off Saudi Arabia’s coast, I knew this perverse understanding of “free speech” has been the basis for hundreds of prosecutions against peaceful protesters and activists, often leading to lengthy prison sentences.

On May 16, authorities initiated the latest such prosecution, opening the trial of Nabeel Rajab, a prominent human rights defender, on charges of “offending an official body.” The relevant offense, according to the government, was caused when Rajab criticized authorities via Twitter for not prosecuting attacks by armed groups against civilians.

Such charges, which once would have perhaps seemed satirical, are by now just commonplace. Indeed, over a year ago, amid massive pro-democracy demonstrations, Bahrain’s king established special military courts, called National Safety Courts. These courts convicted hundreds of people for engaging in peaceful protest and assembly activities that are protected by international law and Bahrain’s constitution — or would be if courts actually applied the constitution.

For example, in a high-profile case against 21 activists and opposition figures, the military court sentenced eight defendants to life terms, 10 others to 15-year terms, and three to shorter terms. What manner of conduct led to these severe punishments?

According to the verdict, Abdulhadi al-Khawaja, a human rights advocate and protest leader, had “advocated the overthrow of the regime” by protesting in favor of a republic, as well as “a willingness to sacrifice, disobedience, a general strike, and marches.” Prosecuters also charged that he had “insulted the army” and “impugned the integrity of the judiciary.”

Hassan Mushaima, another opposition leader given a life term, had advocated “marches, demonstrations and civil disobedience” to call for the “establishment of a democratic republic,” according to the verdict. The court sentenced Ali Abduleman, a prominent blogger, to five years in prison (in absentia) even though its verdict did not cite a single piece of evidence against him.

The special military courts also convicted 20 doctors and medical personnel of transparently political offenses, such as joining in “slogans and chants” that expressed “hatred and contempt for the governing regime.” Nada Dhaif, an oral surgeon, was sentenced to 15 years because she participated in a sit-in, took part in an International Women’s Day march, and assisted with a medical tent that treated protesters. Deya Ja’far, a nurse, was convicted in part because she allegedly stepped on a photograph of Bahrain’s prime minister. And the court convicted Fatima Haji, a rheumatologist, for allegedly asking Manchester United’s manager to observe a moment’s silence before a match.

Last June, after intense international criticism of the government’s general crackdown on protesters, the king appointed the Bahrain Independent Commission of Inquiry, consisting of five international human rights experts. On Nov. 23, the commission issued a 489-page report, which concluded that authorities had committed systematic human rights violations. The commission also called for judicial review of military court verdicts, which, the commissioners explained, meant that the government should free those convicted for peacefully exercising internationally recognized rights.

This call has gone unheeded as the ongoing prosecution of Nabeel Rajab for tweeting demonstrates. Moreover, a civilian appeals court is now engaged in what has alternately been termed an appeal and a retrial in the case of the doctors and medical personnel. But in that proceeding, the government continues to prosecute defendants against whom the only evidence offered involves peaceful political protest and providing medical care, and the civilian court has yet to order the dismissal of charges against these defendants.

Recently, Bahrain’s highest civilian court ordered a retrial in the case of the 21 activists, even though the record is devoid of any evidence of any conduct that could legitimately be called criminal. It is not clear when this retrial will occur, but the defendants, including Abdulhadi al-Khawaja, who is reported just recently to have ended a hunger strike that began in February, will await those proceedings in jail, where they have been for over a year.

So, we will wait and see what happens when al-Khawaja and his co-defendants are prosecuted again for asking to live in a republic rather than a monarchy. We also will wait and see if "Offending by Twitter" is actually a crime in Bahrain — it probably is.