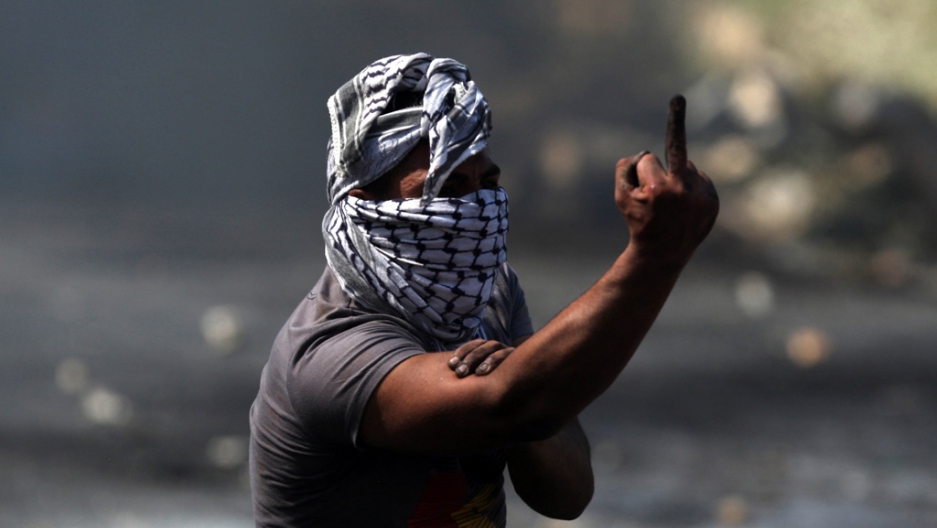 A Palestinian protester gestures at Israeli soldiers near the West Bank city of Ramallah on May 15, 2012, marking Nakba day, which commemorates the exodus of hundreds of thousands of their kin after the establishment of Israel state in 1948.
Credit: Abbas Momani
Share

JERUSALEM and BETHLEHEM — A low-lying cloud of apathy and disenchantment blankets the Palestinian population these days, just as surely as the early summer’s sandy winds dust the cars and merchandise around town.

Even the Arab world uprisings of the past year do not arouse much of a response.

"People just want to live their lives. I couldn't care less about politicians, and I think they couldn't care less about us,” said Abed Shawkat, 52, a father of seven, grandfather of one, and a nurse's assistant at a prominent West Jerusalem hospital. “The only thing that matters to me is my work, which I love, and bringing food home for my children. Politics doesn't exist for me."

In Jerusalem and in Bethlehem, it is almost impossible to get a reaction more emphatic than a shrug in response to the current crisis among Palestinian leaders. In recent weeks, it has been rumored that President Mahmoud Abbas and Prime Minster Salem Fayyad — an economist with a long career at the World Bank who was recently relieved of his second portfolio as finance minister — are no longer on speaking terms. Fayyad and Abbas belong to the same political faction, Fatah. And no one seems to have any hope for a coalition between Fatah and its principal rival, Hamas.

More from GlobalPost: Has the Arab Spring created a bunch of mini Irans?

"People want to have their own country, but mostly, they want to be able to go about their business in peace," Shawkat said. "The youngsters who go out and throw stones at soldiers while their parents are at work are not making their fathers happy. That is not what they should be doing! They should be studying and trying to improve themselves."

No one encountered on a two-day stroll through both cities seemed to anticipate the arrival of a revolt in the manner of the Arab Spring in Palestine or in Israel.

The ongoing political paralysis stems from disagreements between the two principal Palestinian factions. Fatah, led by Abbas and allied with the West, is widely considered obsolete and corrupt. Hamas is defined as a terrorist organization by the United States and Europe, and has taken responsibility for numerous terrorist attacks over the years. But it gained popularity among Palestinians due to the perception that as a movement, it was less corrupt than Fatah, whose leaders became renowned for fattening their private bank accounts at the expense of the public good. Most recent polls, however, show Hamas' popularity in steep decline.

Palestine has been politically, not just geographically, divided since 2006, when against the hopes of the United States, which had pushed for Palestinian elections, Hamas won the parliamentary vote by a margin of two to one. Unable to arrive at a coalition agreement with Fatah, which heads the government, Hamas was essentially handed rule in Gaza while Fatah remained in charge of the West Bank and the de facto capital of Ramallah.

At Abu Shukri, a well-known eatery near the Via Dolorosa in Jerusalem's Old City, many patrons sat for mid-morning refreshments. One of them, Salam Ahmed, 22, a political science student at Bir Zeit University was there with her 1-year-old son and her friend, Sarah Mahmoud. Both young women had their hair wrapped in bright violet scarves.

"The situation is bad because Fatah and Hamas can never decide a single thing together. Everything is stuck," Ahmed said. She says the deadlock is a result of "Israel deciding everything" and adds that, "For now, nothing will change. Only in the future."

Mahmoud nods in agreement and, regarding the upheaval in neighboring Syria, said, "God willing, Assad will meet the same end as Mubarak, but we can't predict anything."

At another table, two old friends enjoyed a fresh-squeezed lemonade with mint, and bowls of hummus with lima beans. Mustapha Nader, 51, a contractor from Nazareth, and Jibrin Daniye, 41, the owner of a marble-cutting business in Bethlehem, both fathers of five children, seemed deflated by the very mention of politics.

"All they do is tread water," Nader said.

"They should all just go away," added Daniye. "Nothing important interests them. They do nothing."

"If they just left everyone alone, we would have been getting along for a long time already," Nader added. "All of them. Netanyahu. Abbas. Hamas. Left to our own devices we could be living in paradise here. Even the Dutch would be dreaming of coming to live here."

More from GlobalPost: For Israel's Netanyahu, Iran is politically expedient

Khaled Abu Toameh, an Arab affairs analyst and journalist based in Jerusalem, said that no one should be surprised by such passivity.

“It’s a reflection of the majority sentiment on the Palestinian street,” he said. “They have long given up on Hamas and on Fatah because of the ongoing rivalry. There have been at least five unity agreements in the past few years and only one of them, the first, was implemented for four months."

A flourish of renewed hope came last September when the Palestinian government unfurled a new and popular initiative calling for UN recognition of Palestine as a sovereign state at the UN's General Assembly meeting. Since then, however, the initiative seems to have dissipated.

The Palestinian leadership has neither pursued recognition state-by-state nor has it responded to specific UN requirements, such as defining exactly what its national borders would be. And so the usual Palestinian version of pronouncements followed by chaos has continued unimpeded.

"So no one really cares any more. People have lost confidence in both parties. When it comes to Palestinian politics, they are completely disenchanted. Mahmoud Abbas has lost much of his credibility. He seems only to engage in gimmicks and people are tired of them. One day he hops to the UN to demand recognition of sovereignty. Another time he threatens to dissolve the Palestinian Authority. But really, Fatah and Hamas talk about unity day and night, but are busy killing one another."

Abu Toameh said he refuses to refer to the Arab Spring by the name it has acquired.

"I'd call this anarchy, lawlessness, an Islamist tsunami. I do not see anything Arab about it, or anything springy about it. It has not produced anything positive so far, besides bringing Islamists to power."

Regarding Palestinian reactions to the pan-Arab revolts, he said, "They don't believe in the Arab world. They feel that the Arab world has abandoned them completely. At the beginning, Palestinians had high hopes for the so-called Arab Spring. They thought all the pro-Western regimes would fall and that we'd have new governments extremely supportive of Palestine and anti-Israeli and anti-American."

"But no one sees any positive changes."