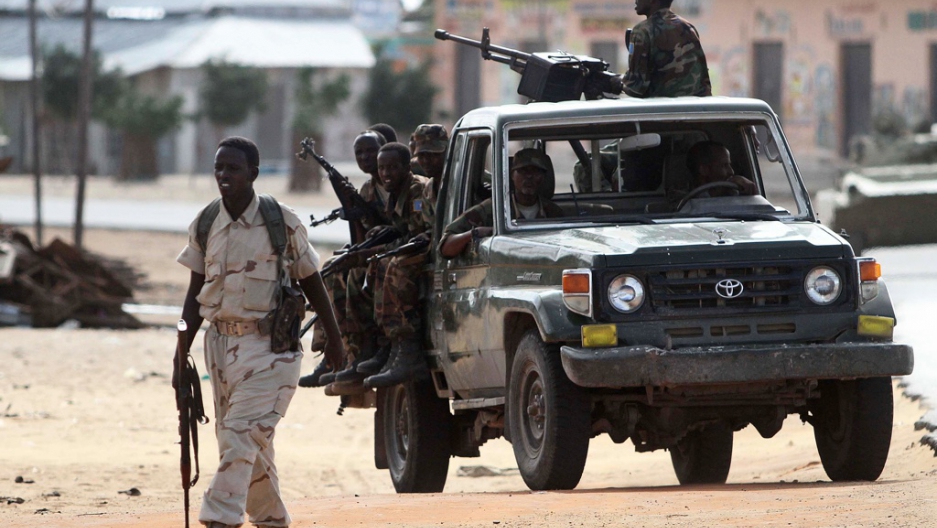 Somali Transitional Federal Government (TFG) soldiers leave on 29 May, 2012 after a clash with Al Qaeda-linked Al Shabaab rebels, who ambushed the convoy of Somali President Sharif Sheikh Ahmed near Elasha. Two Somali soldiers were wounded when Shabaab gunmen opened fire as Ahmed drove down the Afgoye corridor, some 18 miles northwest of the capital Mogadishu, a key road and home to the world's largest concentration of displaced people, for the first time since its capture on May 26.
Credit: Mohamed Abdiwahab
Share

NAIROBI, Kenya — Last week Somalia's Al Qaeda-aligned Islamists lost the town of Afgoye close to Mogadishu, today they were pushed out of Afmadow in the south, leaving them with only a handful of redoubts, most notably the port of Kismayo.

It's a remarkable turnaround for a group that just a year ago controlled pretty much everything in southern Somalia outside of a few blocks of the capital, Mogadishu.

The African Union offensive to take Afgoye was over in a matter of days. When the Kenyan army finally made its approach to Afmadow, roughly halfway between the Kenyan border and Kismayo, Al Shabaab, once again, did not put up much of a fight.

The commander of the nearly 18,000 strong AU force — which now includes Kenyan troops — has promised to take Kismayo by August. Taking and holding Afmadow will be key to the success of any assault on Kismayo as it lies on an important supply route.

Al Shabaab's constant claims of "tactical withdrawals" in Mogadishu, Baidoa, Afgoye and now Afmadow are beginning to wear a bit thin, nevertheless it remains a formidable force and predictions of its imminent demise would be premature.

None of its leaders have been captured, despite the military setbacks, and Al Shabaab operatives have proven themselves willing and able to blow themselves up to deadly effect, launch hit-and-run attacks with increasing frequency and their skill at improvised explosive devices is growing, according to Western security sources in Mogadishu. The asymmetric/guerrilla war that Al Shabaab has threatened is building.

There are thought to be around 6,000 Al Shabaab fighters including hundreds of foreign jihadis, including some from the US and UK as well as battle-tested veterans from Chechnya, Iraq and Afghanistan. Given the recent precedents it seems unlikely that Al Shabaab will stand and fight in Kismayo, but that won't mean the war is over.