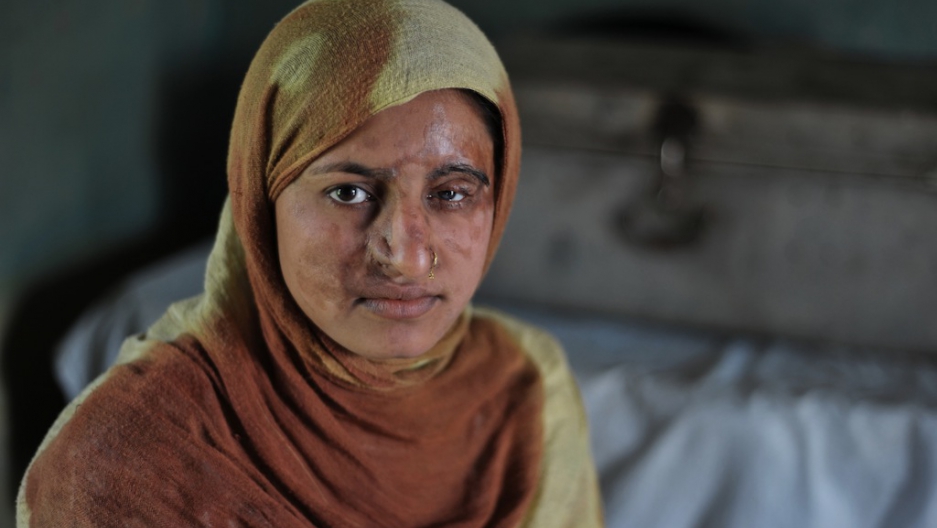 Acid attacks are among the worst forms of domestic violence in Pakistan and mostly directed at women, who are too often classified as second-class citizens. Victims are disfigured for life and ostracised by society.
Credit: BAY ISMOYO
Share

Over 8,000 instances of violence against women were recorded in Pakistan last year, according to the Aurat Foundation, a women's rights organization.

Of those documented, 44 were acid attacks, many perpetrated by assailants on motorbikes who drove up to victims on the street and threw acid on their faces and bodies, sometimes burning the skin off to the point of melting bone. Other attacks took place inside homes and are categorized as domestic abuse. Throwing acid on women has become a common punishment for those who have insulted or dishonored their husbands in some way.

Acid attacks became illegal in Pakistan in 2010 when parliament passed the Acid Control and Acid Crime Prevention Bill, which can carry punishments of lifetime imprisonment. But the law is rarely enforced in rural areas, and acid attacks continue, even on the heels of the Oscar-winning documentary, "Saving Face," which featured a number of Pakistani acid attack victims.

“Passing the legislation was a first step,” said Shahnaz Wazir Ali, a government adviser, to the BBC in a recent article, “but how do cases get to trial speedily? That’s the part we still need to work on. We need to sensitize the police, the lower courts and even the legal community.”

According to the LA Times, "No database exists that catalogs acid attacks in Pakistan, but the Acid Survivors Foundation, a Pakistani advocacy group for victims, estimates that 150 occur each year. The majority of the victims are women, and attacks are often an escalation of domestic violence."

Acid Survivors Trust International (ASTL) is a UK non-profit that works in countries around the world to end acid violence through on-the-ground medical networks and lobbies. It also devotes significant resources to heal not just physical acid burns, but the emotional scars they leave behind as well.

"The psychological scars may be less visible but they are just as real and traumatic," says ASTL. "The severe isolation many survivors face as they are ostracized from their communities, lose the ability to earn a living and much of the independence they once enjoyed, causes additional difficulty."

Because of the mental and societal burdens left behind by acid attacks, it's not uncommon for victims to commit suicide or have suicidal thoughts.

Fakhra Younus, a well-known face of the anti-acid movement because of her 39 surgeries and close friendship with activist and writer Tehmina Durrani, committed suicide in March by jumping from the terrace of her apartment in Rome. Younus was attacked over a decade ago after her ex-husband broke into her mother's home and poured acid on her face while she was sleeping.

According to a GlobalPost article, Younus' attack was the worst Durrani had ever seen: “I have met many acid victims. Never have I seen one as completely disfigured as Fakhra. She had not just become faceless; her body had also melted to the bone."

Ten-year-old Zaib, the victim of a 2011 attack that targeted her mother an sister, cannot eat and her eyes have been melted shut. She complains about no longer wanting to live, and hasn't attended school in months.

"She cries so much," Zaib's uncle said to the LA Times. "There are times when she has said: 'I want to die. It'd be better to die than to live this life.'"

But not all hope is lost.

The ASTL website features uplifting survivor stories, like Saeeda's, who was routinely abused by her husband and endured an acid attack in 2008.

Now, she has learned "various practical skills such as tailoring, basket weaving, making beaded jewelry, and basic computer and English language skills," according to her biography.