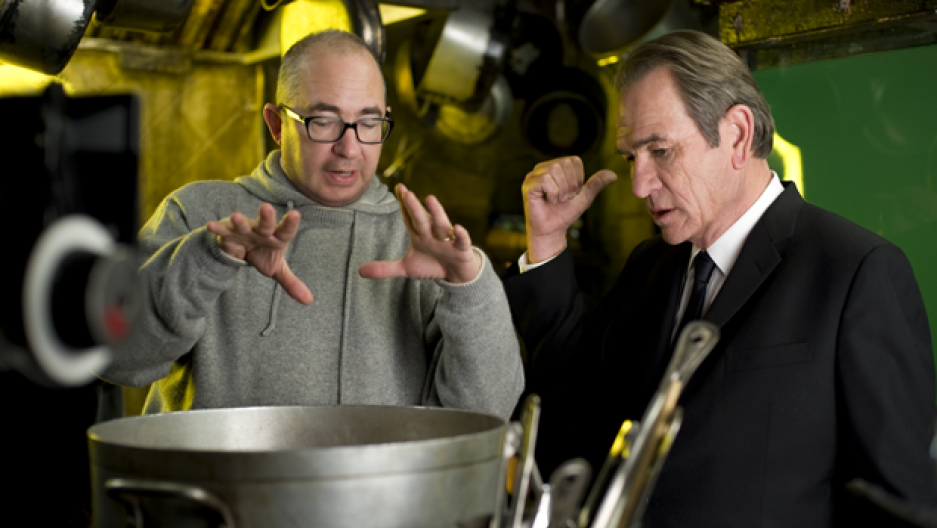 Director Barry Sonnenfeld discusses the movie with Tommy Lee Jones on the set of Men In Black III (Photo by Wilson Webb.)

Cast a few wisecracking superheroes, mix in some alien bad guys and fancy special effects, and ka-ching: another summer blockbuster rolls off the assembly line. So it’s easy to forget just how radical and fresh Men In Black seemed when it came out in 1997.

Based on a Malibu comic, the smart, funny sci-fi adventure starring Will Smith and Tommy Lee Jones was hugely popular with critics and audiences. The franchise returned this past weekend with Men In Black III.

Director Barry Sonnenfeld said this new movie is, in part, an attempt to redeem the sins of Men in Black II, which was trying too hard to be funny.

Sonnenfeld started in the business as a cinematographer, working with Joel and Ethan Coen on their first movie, Blood Simple.

"We shared a common visual style which is that the camera can be another actor or character in your movie," he said. "I sometimes use the camera as a way to grab the audience and say, 'Come on, let's go on this adventure.' "

Sonnenfeld went on to work on big budget Hollywood hits including Big and Raising Arizona. He points to his work on When Harry Met Sally to explain how cinematographers can make a scene funnier. Take the movie's famous orgasm scene in Katz's Deli.

"A lot of times what makes a comedy scene work is length and pregnancy," he said. "Oftentimes really good jokes are the function of setup more than punch line.”

Sonnenfeld also revealed there are easter eggs hidden in the new Men In Black film — tributes to his cinema hero, Stanley Kubrick.

"No one really thinks of him as a comedy director, but Strangelove is as brilliant a comedy as I've ever seen."