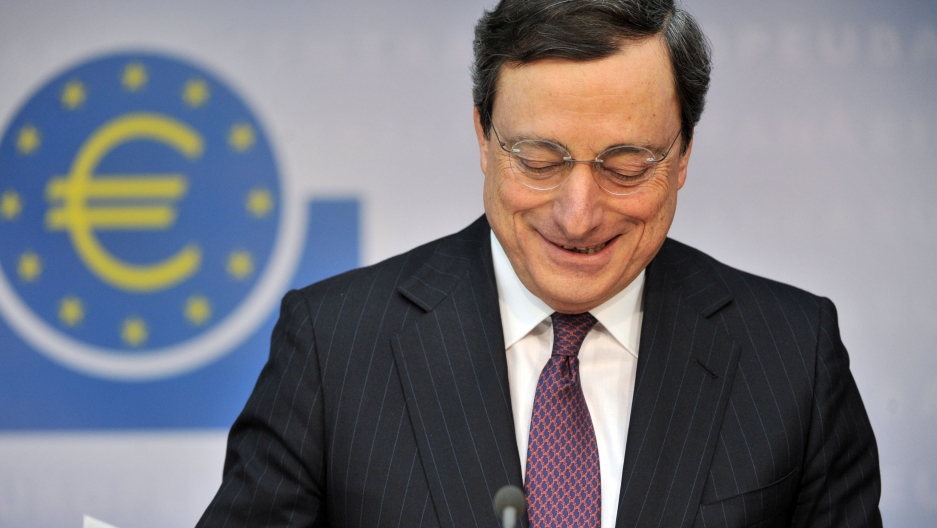 ECB President Mario Draghi is credited with having staved off a credit crunch and calming financial markets by making more than half of a trillion euros worth of cheap three-year loans available to hundreds of banks across the EU in December and February.
Credit: AFP
Share

LONDON, UK – The president of the European Central Bank, Mario Draghi, has called on euro zone leaders to clarify their vision for the 17-nation currency block quickly as the current setup is “unsustainable.”

Speaking to the European Parliament in Brussels Thursday, Draghi said the ECB could not “fill the vacuum of lack of action by national governments” on either “fiscal growth” or “the structural problem,” and added that “the next step… is to clarify what is the vision a certain numbers of years from now. The sooner this is specified, the better it is,” the BBC reports.

The European Union’s economic commissioner, Olli Rehn, also told lawmakers Thursday that further austerity and closer cooperation were needed if the euro zone was to avoid breaking apart, and talked down the idea of debt mutualization through the issuing of joint bonds by European states.

Addressing the key role of banks in the European economic and financial crisis, Draghi said Europe needs a centralized way of forcing its banks to restructure, and argued that recent cases in Spain and Belgium demonstrate that national regulators are loathe to admit the extent of their problems at their home institutions and are choosing “the worst possible way” to help their banking sectors by putting off difficult decisions, which ultimately raises costs and undermines trust, according to the Associated Press.

More from GlobalPost: How 'deutsch' does Deutsche Bank need to be?

Germany, Europe’s biggest economy, has to date firmly resisted any collective European banking resolution and guarantee system, as well as any provision of bailout funds to banks without the country in question submitting to an EU/IMF austerity program, Reuters reports.

Draghi was speaking Thursday as head of the European Systemic Risk Board, a watchdog panel set up to monitor Europe’s financial stability. On Wednesday EU Commission President Jose Manuel Barroso said that EU leaders would discuss a closer economic union at a summit at the end of June, which would include a banking union and joint financial supervision.