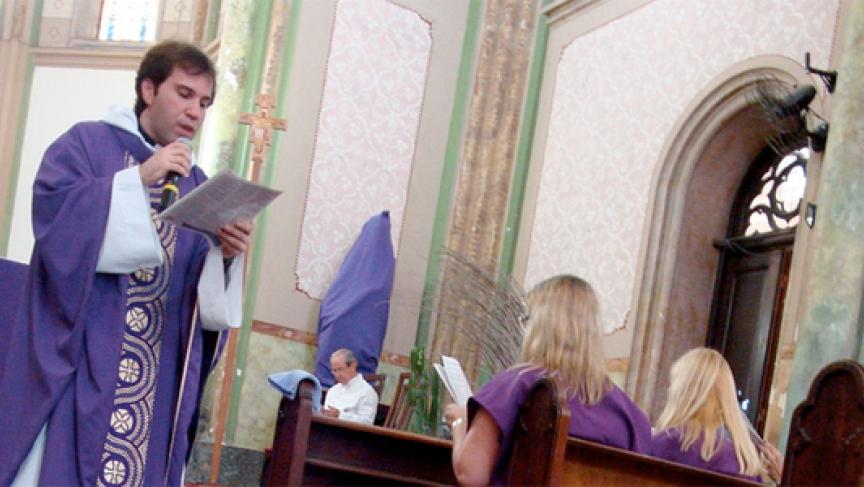 Share
The world's most Catholic country isn't as Catholic as it used to be. In Brazil, the Vatican has lost ground for decades, with the double whammy rise of Evangelicals and a growing group that's not religious at all. A movement called the Charismatic Catholic Renewal appears to be helping the Catholic Church retain followers, in Brazil and throughout Latin America. But it's a complicated relationship. To the hundreds of congregants at a Catholic Church in Rio I visited, Father Gleuson Gomes is a godsend. (See a video of Father Gleuson Gomes preaching here.) Just 35, he's a priest with a devout and growing flock here to watch him deliver a service that's a departure from the usual Sunday mass. Father Gleuson is part of Brazil's Charismatic Catholic Renewal — the Vatican-approved answer to a steep drop in Catholics here. Surveys show that in 1980, nearly 90 percent of Brazilians identified as Catholic. By 2009, that figure had dropped to just 68 percent. At the same time, Brazil's Evangelical following has skyrocketed to 20 percent of Brazil's population. That — combined with a rise in secularism — has caused alarm within the Catholic Church, making it ever-more dependent on the highly popular Charismatic movement's nontraditional approach. Charismatics use many of the methods that helped make Evangelical services so popular here in Brazil – the use of music, more audience participation and an all-around brighter tone. In fact, it's sometimes referred to as "Evangelical Catholicism". And it's having an impact. Sixteen-year-old Larissa Rodrigues says this church was used to empty pews until two years ago, when Father Gleuson showed up. "This church before Father Gleuson — basically they wanted to close," Rodrigues said. "There was nobody here. It didn't have anything. The father came and it got a lot better. Now mass is packed." Father Gleuson isn't shy about touting his record. "The community needed a revitalization," he said. "That's why I was sent by the bishop — because of my charismatic form of ministry. It made it easier for followers to participate. We were able to make a community in this parish, a more fervent and participatory community." And Brazilians of all ages, including devotee Arthur Machado, find themselves coming back for more — week after week. "You get excited because the whole congregation likes it," Machado said. "It's alive. It becomes more accessible — none of that formal stuff." But some practices have raised eyebrows within Brazil's Catholic establishment. These include "speaking in tongues" to channel the Holy Spirit and a belief in divine healing. And then there's what some see as crass commercialism. SÃ£o Paolo-based Marcelo Rossi is the country's most famous Catholic Charismatic priest. Over the past decade, Father Rossi's built a multimedia empire, complete with albums, movies and books — all selling by the millions — plus, a heavy online presence. Despite his ability to draw staggeringly large audiences, even Rossi has been embraced with some reluctance. And he's been warned on occasion by members of the Catholic establishment to tamp down the entertainment in his services. Still, Professor Andrew Chesnut of Virginia Commonwealth University says Father Rossi and other Charismatics are keeping Catholicism alive here and the Vatican knows it. "Many Brazilian bishops are not Charismatics but have come to perceive it as the best way to stanch this massive flow of Catholics into the Pentecostal churches," Chesnut said. "So from an institutional standpoint it's been the most strategic thing the Church could do to stop the exodus of Catholics into the Pentecostal churches." Professor Chesnut says the Charismatics' non-traditional approach doesn't demean the Catholic message. He questions the notion that non-European Catholics should practice the faith with norms imposed by Europe. Religion scholar Cecilia Mariz of the State University of Rio de Janeiro agrees, saying the Charismatic approach might be a better fit for Brazil and ultimately bring people back to the Catholic Church. "There's an affinity between the enchantment of Charismatics and enchantment of Brazilian culture," Mariz said. "Also it's a very lively, very happy religious experience. It's very emotional." Father Gleuson certainly agrees with that sentiment. He says his sing-along style is an effective vehicle for delivering the Catholic message. After all, he says, a Charismatic service is still at its core… a mass. "It brings a vivacity to your faith," Gleuson said. "It brings a spiritual happiness. You experience the holy word more deeply." The Pope's visit to Brazil for next year's World Youth Day Catholic pilgrimage will serve as a test of how far the Vatican's relationship with the Charismatics has evolved. Father Gleuson is one of many Charismatic pastors trying to mobilize tens of thousands of volunteers for the event. It's no coincidence that Brazil was the Vatican's pick. It will give Pope Benedict XVI a chance to remind Brazilians of the faith that once wielded so much influence here. No word yet on whether the pontiff will be swaying in the aisles.