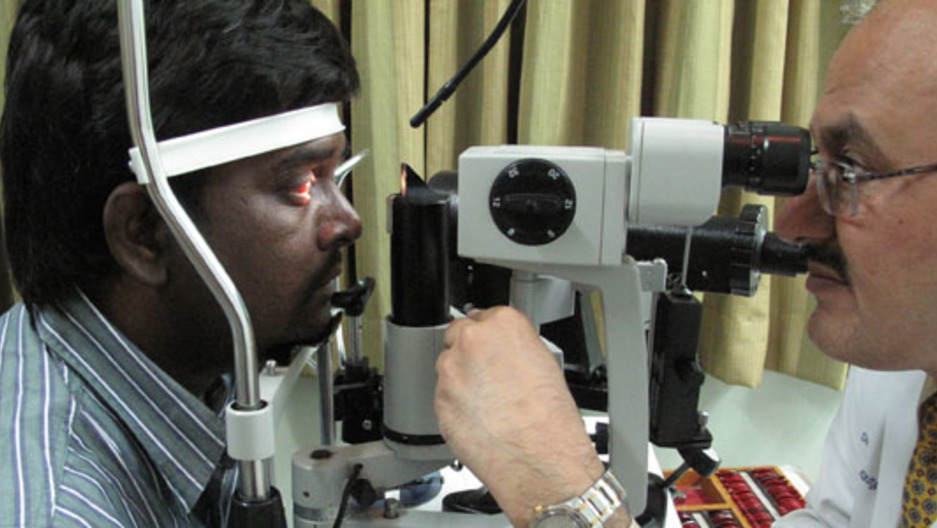 Share
Ashok Chakravarti remembers the moment he went blind. It was on February 18, 2002. He was at work, at a chemical plant, when a pipe carrying sodium hydroxide (caustic soda) started to leak. "I was fixing the leak when the chemical splashed into my eyes," he says. The accident damaged the outermost layer of his eyes, the cornea. Chakravarti is among thousands of Indians who lose their sight in chemical accidents each year. Today, some of those people can see again, thanks to scientists at the L.V. Prasad Eye Institute, in Hyderabad. The institute is treating patients with stem cells — not the controversial embryonic stem cells, but adult stem cells. Inside the lab where the cells are grown, Savitri Maddileti shows me two petri dishes. Each dish contains a tiny piece of eye tissue from a patient. "One is [from a] 15-year-old female, and the other is [from a] five-year-old male," she says. Both children had accidents with household chemicals and became blind in one eye. What scientists here aim to do is fix the damaged eye with stem cells taken from the good eye. (In patients who have suffered damage to both eyes, the stem cells are taken from the eye of a close relative.) Maddileti and her team don't isolate the stem cells from the eye tissue, but under the right conditions, those cells start growing on their own. "Can you see these bright cells coming out?" she says, showing me an image through a microscope. The cells look shiny, and they are starting to form a thin transparent layer. This is the new corneal tissue that will be transplanted into the patient's damaged eye. Pathologist Geeta Vemuganti, who heads the team that grows these stem cells, says the process is much like gardening. "It's akin to putting seeds, or a little sapling along with a little bit of soil, or the roots," she says — the stem cells being the seeds or saplings, and the rest of the eye tissue being the soil or roots. Vemuganti's team is not the first to repair damaged corneas with stem cells. This technique was developed by a group of Italian scientists. But Vemuganti modified that technique, making it simpler and faster. "Instead of three to four weeks, we made it 10 days," she says. This also made the process less expensive, which is important in a hospital that treats all patients, including those who can't afford to pay. Vemuganti and her colleagues have treated hundreds of patients from all over India. One of them is Ashok Chakravarti, the man who lost his sight back in 2002 while fixing a pipe at work. Three months and a few surgeries later, he was able to see again. "It was like being given a second life," he says. But after several years of normal vision, Chakravarti started having eye problems again. So he has returned to the institute to see Virender Sangwan, the surgeon who spearheaded the stem cell initiative. Sangwan examines Chakravarti's eyes. "Your body has rejected the right cornea," Sangwan tells Chakravarti. That's because Chakravarti wasn't just given the stem cell transplant; he also received corneal tissue from a dead donor, because his injury was especially severe. Sangwan says the stem cell transplant worked just fine, but the corneal graft is starting to fail. "That's a normal graft rejection, like any other transplant rejection," says Sangwan. "So we are going to replace that cornea and see if that will work." Many of his patients return with post-surgical complications. Treating them is an ongoing process. But Sangwan says any success is important because when poor people in India go blind, they lose more than their sight. "Once you don't have the eyesight, then the society doesn't respect you," he says. "Socially [you're] not productive, so everybody starts neglecting [you]." By restoring sight, Sangwan says he is restoring his patients' self esteem and, as he puts it, their "faith in life."