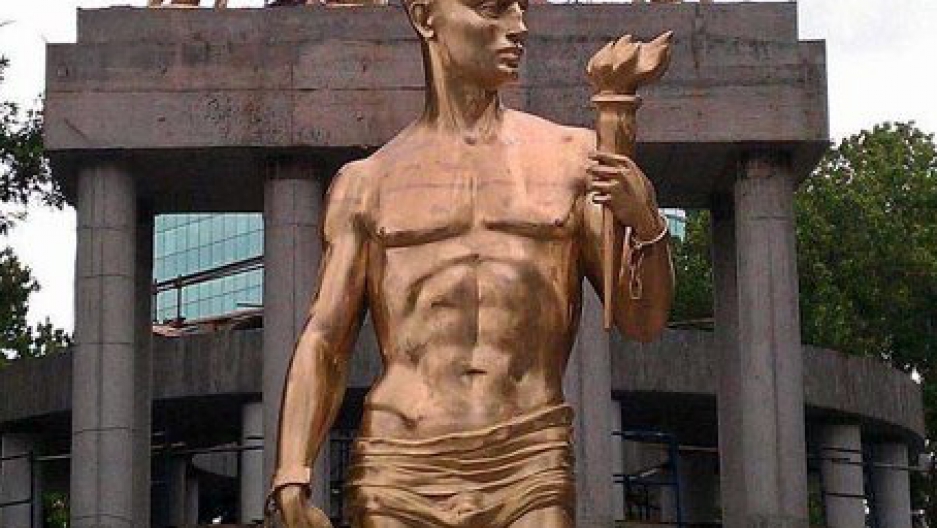 It isn’t clear who exactly complained about the nudity of the Greek God Prometheus, whose bronze statue now graces the area opposite the Parliament building in Skopje, the capital of Macedonia, but that’s part of the mystery behind this story.

According to this article in the Balkan Insight, the complainers were “unidentified women's organizations."

What is clear is that good old nude Prometheus — who in Greek mythology is a symbol of self-sacrifice because he stole fire from the gods — suddenly appeared a few days ago decked out in brand new tidy whities.

Made out of bronze, naturally.

The speedy official response and “cover up” have sparked debate in Macedonia, prompting some to speculate whether other statues, like the giant sculpture of a woman breast-feeding a child, which is yet to be erected just a few hundred meters from the Prometheus sculpture, will also get a cover up.

“Our environment is small and frustrated and this (speedy cover-up) reflects hypocrisy and self-censorship….In private everything is allowed while in public everything is disputed,” Velickovski said.

Then again, this isn’t the first time Macedonia has been accused of hypocrisy when it comes to their treatment of Greek heroes.

The country has been in a long dispute with Greece over the right of Macedonians to call their country the Republic of Macedonia, which the Greeks see as a claim to their own region and history, known as Greek Macedonia.

The Macedonians have been annoying the Greeks with sculptures for years now, first by claiming Alexander the Great as their own hero, and then proceeding to erect a 72-foot-tall marble statue of Alexander right in the center of Skopje, the capital of Macedonia.

And he doesn't come alone. His statue is part of monument dedicated to “fallen Macedonian heroes,” aimed to beautify the socialist realism feel of downtown Skopje.

He certainly doesn’t help the Macedonian-Greek conflict, whether he is butt naked or wearing designer underwear.

All I can say about the Prometheus incident, on behalf of all unidentified women’s organizations out there, is that we are all grateful what Greek mythology, whether Greek or Macedonian, has done for the male sixpack.

We, the unidentified women of the world, surely hope that no further cover up of Prometheus will be needed.