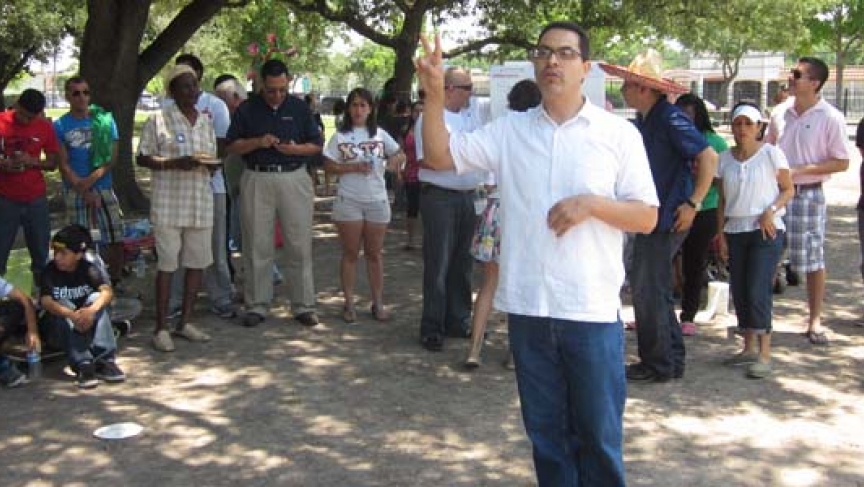 Latinos could be a majority in Texas within 20 years. Political activists like Carlos Duarte, in Houston, want to make sure they're voices are heard. (Photo: Jason Margolis)

Texans are taking to the voting booths today. And... so what? Mitt Romney has the Republican nominee for president wrapped up. And we knew long ago that Texas would vote for any Republican presidential candidate.

But Texas might not be such a Republican slam-dunk forever. The state's demographics are changing quickly. Texas is 37 percent Latino, and demographers say the state could be majority Latino in less than 20 years. And those Texas Latinos have been overwhelmingly voting Democrat. But that wasn't always the case.

"They're such hard workers, they believe in working hard, and I can't believe that if you understand the value of hard work and earning your money, wanting the government to take it away to give it to people that don't work hard to get their money."

Robin and her husband Jim, who co-founded their group, say they have an open door for Latinos. But they're not actively recruiting them for this election cycle.

"We don't want them to think that we're only going after them in order to get them to vote our way in the primary. What we want to do is establish a long-term goal," said Robin.

And that long-term goal for Texas?

"It's going to be a Republican Latino state, you watch. I'll talk to you in 10 years," said Jim.

But the Republican party has a lot of work to do.

I went to a get-out-the-vote barbeque in southwest Houston, dubbed "Tacos & Votes." There were about 150 people there, mostly Latinos. I met people like 36-year-old civil engineer Adan Gallegos, a US citizen originally from Mexico.

"I used to be Republican, but ever since they started the Latino bashing, I actually switched sides."

"The state legislature here effectively de-funded education here. The people that are most affected by that are the Latino and African American communities," said Rey Guerra, a mechanical engineer and political activist.

Another contentious issue here is the new Texas law requiring voters to have a photo ID.

The US Justice Department blocked the requirement earlier this year, saying it unfairly discriminates against Latinos who are less likely than Anglos to have a photo ID. The case is being challenged in court.

At the barbeque, children took swings at a piñata. Carlos Duarte, with the group Mi Familia Vota, handed out post it notes to people in the crowd.

"What I want you to write down is the obstacle that has prevented you from voting," said Duarte. "What we're going to do with that, we're going to post it on piñata, and we're going to have the youth break that piñata, symbolizing that this time the Latino community is ready to overcome all obstacles to civic participation."

People wrote down things ranging from a poorly informed community to apathy.

About a dozen kids took a turn at the piñata. Finally, it broke and the kids descended on the candy.

Some in Houston's Latino community may be newly galvanized, but breaking the piñata remains largely symbolic. Houston is 44 percent Latino. But even though some Tea Partiers say they are reaching out to Latinos,Mark Jones, a political scientist at Rice University in Houston, said politicians haven't paid them much attention.

"Ignore is probably too strong, but they certainly don't actively cultivate the votes of Hispanics."

Jones said Texas Latinos vote in far lower numbers than Latinos in states like California. He said this is due to a weaker Democratic party in Texas and the lack of a charismatic Latino leader in Houston and Dallas. And, in the past, Texas Republicans have played smart politics.

"What Republicans, particularly the more pragmatic ones, have tried to do is a dual strategy: Keep Hispanics from having an issue around which to mobilize, thereby keeping Hispanic turnout low and not doing anything that pushes Hispanics who normally would vote Republican to vote Democratic," said Jones.

Some Republicans I met are worried that this playbook is being ignored.

Houston attorney Jacob Monty sits on the board of directors for the new group Hispanic Republicans of Texas. His great-grandfather crossed the Rio Grande and moved to El Paso. Monty said Republican policies on immigration have been "a disaster since 2004."

"The Republicans need to wake up on this issue, because if they don't, if their Hispanics numbers don't improve, we're going to become a minority party," said Monty.

Up in Kingwood, I asked Jim and Robin Lennon, the Tea Party supporters, how they expect some of their policies to appeal to Latinos. For example, the deep education cuts that disproportionately affect Latino students.

"Let me ask you a question, what percentage of the budget in the state of Texas goes to public education? It's 57 percent. It's a huge number, a good 20 percent of that goes to taking care of the children of illegal aliens. At what point do you say enough?" said Jim.

Talk like that may well resonate with fiscal conservatives. But it may not be the kind of language likely to appeal to a new generation of Latino voters in Texas.