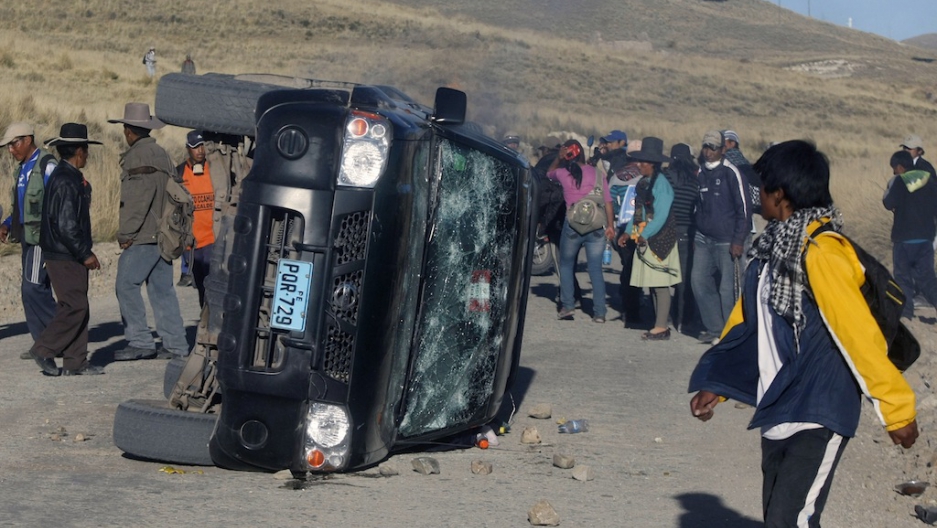 Locals surround a damaged car during a protest against Swiss-owned mining company Xstrata, in the Cuzco province of Espinar, 1,100 km southeast of Lima. At least two people were killed during clashes after hundreds of demonstrators lugged tree trunks and boulders into roads in the Espinar area of Cuzco to protest what they say is the mining firm's pollution of the Salado and Canipia Rivers.
Credit: STR
Share

Peru declared a 30-day state of emergency in Espinar province on Monday after two people were killed and dozens of police officers injured in a violent anti-mining protest.

According to the Associated Press, protesters threw rocks at police and set fire to pastures. They claimed the Tinaya copper mine near Cuzco, owned by Swiss-based Xstrata plc, is contaminating water supplies and causing farm animals to fall ill. The state of emergency puts the military in charge of public order and gives authorities the right to suspend civil liberties, including the right to assembly.

Protesters blocked highway access to the mine for the last week, reported Voice of America. Authorities said a local prosecutor was also briefly taken hostage by protesters during Monday's violence.

According to Reuters, President Ollanta Humala, a former military officer, said he wanted mediation instead of violence. But his critics say he has become impatient with the protesters and relies too willingly on authoritarian tactics to keep the country in order.

Humala called a state of emergency once before in December to stop protests in northern Cajamarca over a proposed Conga mine, reported the Los Angeles Times. The government is now reviewing the copper and gold mine project, even though Humala is a strong defender of mining.