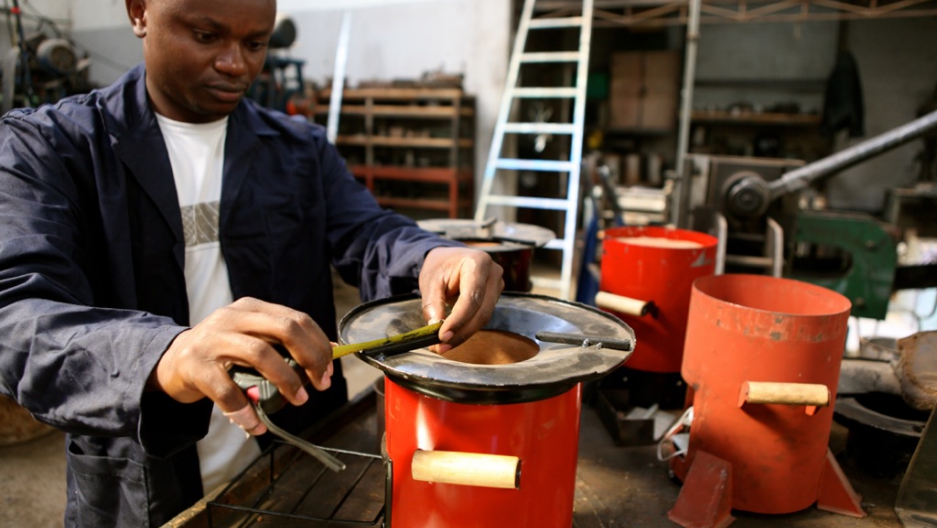 John Irungu, one of Paradigm Kenya's team, checks a new batch of the environmentally-friendly Jiko Poa stoves by measuring the dimensions of the hot plate.
Credit: Tristan McConnell
Share

NAIROBI, Kenya — Greg Spencer, a 27-year-old from San Diego, Calif. was on holiday in Uganda with his dad four years ago when he found his calling.

“I was just a year out of college and I wanted to be involved in a cool, challenging and innovative business,” he said.

In Uganda he saw some of the 3 billion people worldwide who cook on open fires. An estimated 1.9 million of them die premature deaths from the inhalation of toxic fumes, according to the World Health Organization.

Spencer gained an interest in the emerging world of carbon markets, in which polluting companies buy credits from firms that reduce carbon emissions, from his father, Greg Sr, who made his name with the US-based offset company Blue Source. In Uganda Spencer asked himself: “How do we leverage the carbon market to make a sustainable business that will impact the world positively.”

His answer was clean, efficient cooking stoves that use less fuel and reduce deforestation. In addition, those cooking with the innovative stoves would be exposed to less smoke, reducing the risk of pneumonia, lung cancer and other respiratory diseases.

Now Spencer spends his time in a noisy, clanging, oily, dirty double-story warehouse in Nairobi’s industrial zone. The area is an outsized, traffic-clogged maze of broken roads and rundown depots stretching from the fringes of the city’s central business district to the edge of its international airport.

The stove itself is an 11-inch tall metal cylinder with three legs, two handles, a grate, a hotplate and a ceramic lining. Because it is aimed at rural families, for whom charcoal is often unavailable or too expensive, the stove is made to burn wood.

A recent survey by the Global Village Energy Partnership found that 76 percent of East Africa’s 100 million residents use wood to cook.

“It’s a simple design, but it’s well-designed. It’s all about airflow and thermal dynamics,” says Spencer. The stove allows wood to be burned quickly and completely while the insulated lining directs the heat to the pot.

In tests the stove — marketed in Kenya as the “Jiko Poa” or “Cool stove” — has proven to be 45 percent more efficient than open fires and it reduce toxic smoke by 50 percent.

John Irungu, one of Spencer’s colleagues at Paradigm Kenya, is quality checking the stove’s latest design. An earlier version had a sleeve around the hotplate but users complained they could not fit large enough pots on top so it has now been removed from the new batch.

The Nairobi factory turns out around 2,000 stoves a month, which are sold through a network of 40 dealers.

The subsidized retail price is 1,325 Kenya shillings ($16) and even this is beyond the reach of the poorest who subsist on just a dollar or two a day. Recently Paradigm Kenya has begun marketing the stove through women’s cooperatives as cooking remains very much women’s work in most homes across Kenya.

The Paradigm Project is now looking to expand to other products including a water filtration unit that cuts carbon emissions by reducing the need for boiling water over charcoal or wood.

It is not just the products that are innovative, but the financing too. The company raised $3 million in private equity for the Kenya program to fund the manufacture and distribution of 400,000 stoves over 10 years. Spencer says that because of the stove’s success so far, the target is now three times that number. There are plans to launch a similar product in Ethiopia and Rwanda later this year.

The return for investors will come through the sale of carbon credits earned by the stoves, which burn less fuel and produce fewer emissions.

The proof of the concept, financially speaking, came in January when the Paradigm Project sold its first 125,000-ton tranche of carbon offsets created during the first two years of the Jiko Poa program to the Climate Neutral Group, a Dutch organization.

“A lot of people talk about carbon offset development but don’t deliver. We’ve done it, we’ve presold the carbon and we’ve delivered it,” says Spencer. “That gives us credibility.”