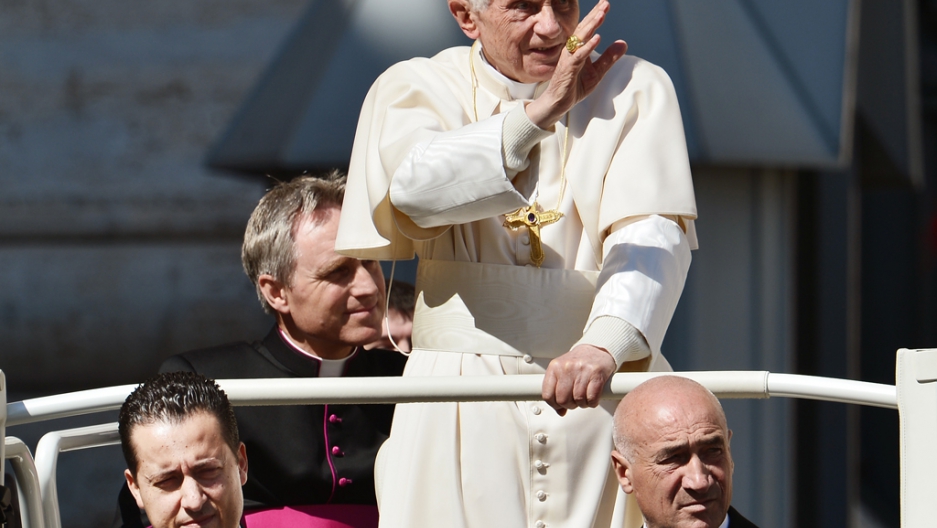 Paolo Gabriele (Bottom L), the pope's butler, sits in the popemobile next to Pope Benedict XVI as they arrive in St. Petr's square on April 18, 2012 for the pope's weekly general audience. Vatican police arrested the pope's butler on May 25, 2012, on allegations of having leaked confidential documents and letters from the pontiff's private study to the newspapers, Italian media reported.
Credit: AFP
Share

The Vatican Monday denied reports by Italian media that a cardinal is suspected of playing a major role in the widening "Vatileaks" scandal, Reuters reported.

Several Italian media outlets quoted anonymous sources on Monday who said Gabriele was just one of around 20 whistleblowers who had been leaking information from the Holy See, according to the AFP.

Vatican spokesman Reverend Federico Lombardi said many Vatican officials were being questioned in the investigation but insisted “there is no cardinal under suspicion," the Associated Press reported. Lombardi also called the unsourced reports in the Italian media “pure fantasy."

Gabriele has worked as the Pope's personal butler since 2006 and was seen as extremely loyal to Benedict, the AP reported. He has been in custody in a Vatican detention facility since the papers were discovered in his home Wednesday as part of the church's investigation into the leaking of confidential Vatican correspondence, according to the AP.

Gabriele's lawyer Carlo Fusco said his client would “respond to all the questions and will collaborate with investigators to ascertain the truth," the AP reported.

Cardinal Robert Sarah, the 67-year-old head of the Pontifical Council Cor Um, which handles church missions around the world for the Curia (the Vatican's government), was the first senior official to speak out about Gabriele's arrest, according to the Telegraph.

"Let's hope that the arrest of the butler is an isolated case and that there are no other traitors plotting in the Vatican," Cardinal Sarah said, the Telegraph reported. "There is much sadness. It is painful to see someone like the Holy Father betrayed by someone who is so close to him."

"However it would be even more serious if other accomplices came to light," the Cardinal continued. "That's why we must let the magistrates investigate fully to clarify this shocking situation and until then nothing can be excluded including a plot or some other guided hand."