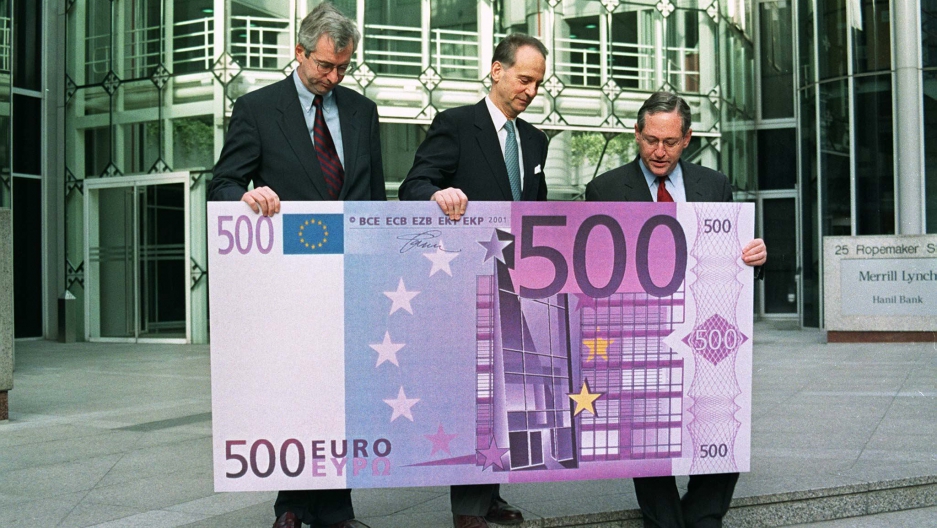 Executives pose with a very big 500 euro note on January 1, 1999, when the currency was launched. Could they have known that it would lead to this?
Credit: Sinead Lynch
Share

London — The euro zone crisis boils along, like a tea kettle left screaming on the stove.

Another summit of European leaders last week failed to resolve the crushing questions of Greece and how to square the circle between austerity and growth (aside to Europe's leaders — you can't. It's one or the other).

But once this crisis is resolved — and it will be — the fundamental problem of the euro will remain: its rickety construction. It is a house without a foundation. The euro is a single currency serving 17 countries, with 17 different governments, operating on 17 different electoral timetables, setting 17 different tax policies and issuing many more than 17 different kinds of bonds).

Europe's single currency needs to be underpinned by an independent central bank that can issue a single bond for the whole euro area. It needs a single fiscal policy. Most important, it needs a single democratically elected government to oversee the economy the euro serves.

There's a word for this arrangement among states. Former British Prime Minister Margaret Thatcher knew it well: "Federalism." Federalism was okay for America, Thatcher said repeatedly, but she was dead set against it for Europe. Britain remained outside of the single currency.

The architect of the euro, France's Jacques Delors, knew the word Federalism as well. He wanted more of it. The German government did not want to surrender the authority of the Bundesbank. The euro was created by political negotiation and in politics you take the deal you can get. Delors got the euro. Germany kept the Bundesbank.

That was more than 20 years ago.

Now the F-word is resurfacing in the euro debate and, interestingly, it has been raised by a German. Jorg Asmussen, the German representative on the board of the European Central Bank, and, according to the Guardian, Chancellor Angela Merkel's "fireman" in the crisis, recently gave a speech in Berlin calling for greater federalism to strengthen the euro.

"The advantages of the currency union are so magnificent that they should be stabilized through deepening," Asmussen said. "That means a fiscal union and a banking union as well as a democratically legitimized political union."

Federalism, in other words.

Anyway, as a public service to GlobalPost readers, and more to European policy-makers who hold the fate of the global economy in their hands, I went back to the source-book on creating "E pluribus unum," The Federalist Papers.

There are some similarities between the situation in the euro zone and the situation among the colonies in 1789. The main one is that the 13 former colonies were trying to form a "more perfect union" and the 17 countries of the euro zone are going to have to. I wanted to see if there was any advice Alexander Hamilton, James Madison and John Jay might be able to offer today. It goes without saying they can offer a lot.

For example, there is fear that a more federal Europe would allow Germany to dominate even more than it does. But in Federalist 10, James Madison makes this point: "The smaller the society, the fewer probably will be the distinct parties and interests composing it; the fewer the distinct parties and interests, the more frequently will a majority be found of the same party; and the smaller the number of individuals composing a majority, and the smaller the compass within which they are placed, the more easily will they concert and execute their plans of oppression."

In a sense, that is the situation in Europe today. Germany's national neurosis about inflation stifles the debate on realistic ways to end the crisis.

Madison adds, "Extend the sphere, and you take in a greater variety of parties and interests …." That's true. A federal euro zone would give a more equal platform to those countries at the periphery for whom deflation is the problem and it should, if properly constructed, give those countries the votes to override Germany's parochial worries.

The Federalist also offers sage theoretical advice as to why closer compacts among nations is a good idea. In Federalist 6, Hamilton quotes a liberal French priest, Abbe de Mably, "Neighboring Nations… are naturally enemies of each other unless their common weakness forces them to league in a Confederate Republic, and their constitution prevents the differences that neighborhood occasions, extinguishing that secret jealousy which disposes all states to aggrandize themselves at the expense of their neighbors."

Federalist 41 offers sage practical advice on how to bring a more federal Europe into being: Don't require unanimous ratification of the new treaty — or constitution — that creates it. The American constitution came into effect after nine of the thirteen states approved it. Madison notes, "To have required the unanimous ratification of the thirteen States, would have subjected the essential interests of the whole to the caprice or corruption of a single member."

The bane of the European Union's existence has been its requirement for unanimous consent among its members for major treaty initiatives. Before there can be a federal Europe — the only way for the euro to survive long term — the 17 nations have to agree to follow Madison's prescription. A qualified majority is the only way forward.

By the way, Britain is the country that clings most to the power of the veto.

Of the larger nations within the EU, it is the one that fears federalism most. That's ironic given that Britain itself is an early modern example of a federal state, albeit a monarchy rather than a republic.

A fact noted by John Jay in Federalist 5, when he quotes a letter written by England's Queen Anne in 1706 to the Scottish Parliament as it decided whether to unite with England:

"An entire and perfect union will be the solid foundation of lasting peace," Queen Anne wrote. "It will secure your religion, liberty, and property; remove the animosities amongst yourselves, and the jealousies and differences betwixt our two kingdoms. It must increase your strength, riches, and trade; and by this union the whole island, being joined in affection and free from all apprehensions of different interest, will be enabled to resist all its enemies."

Interesting, that the Scots are now preparing to vote in 18 months on whether to remain in the United Kingdom, in part because the dominant attitude of the English, the majority, towards the EU is negative and the Scots, as a nation, are very positive about forging closer ties with Europe. There's plenty in the Federalist about the oppressive nature of majorities. You can read the lot here.