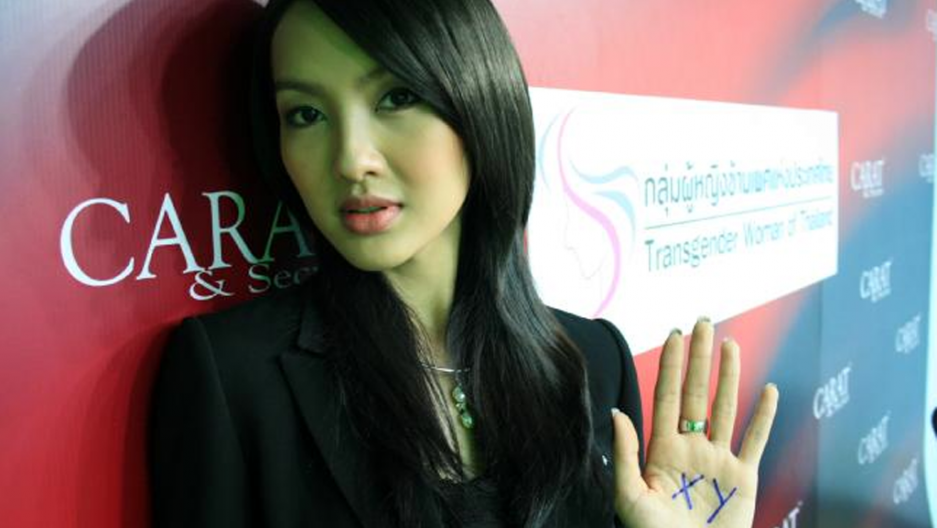 Yollada “Nok” Suanyot at a press conference. She released this picture of herself on Hi5, a social media network popular in Asia.
Share

BANGKOK, Thailand — Consider Yollada “Nok” Suanyot among the more unique challenges for campaign strategists. After all, the public is seldom presented with a male-born political candidate who was famously arrested as a teen for using a fake ID to enter — and win — women’s beauty pageants.

Via May 27 provincial elections, Yollada could become the highest-ranking transgender politician in Thailand’s history. If victorious, a potential but unlikely scenario, she will have taken a most unusual route to political office: rebellious teenage pageant queen to pop singer to rights advocate and entrepreneur.

Yollada, now 28, is campaigning in her home province of Nan, a remote region on the Thai-Laos border. She has no party’s backing. She competes independently against a candidate from Thailand’s well-funded ruling party, Pheu Thai, for a top position commanding provincial finances.

In lieu of a war chest, Yollada has notoriety.

She is perhaps best known as a cover model and former member of Venus Flytrap, a Spice Girls-esque troupe of fellow male-to-female transgender Thais. (Her stage name was Posh Venus.)

More recently, Yollada has attracted attention by forming a rights group — the TransFemale Association of Thailand — and openly calling for state-funded sex changes. She is public about her desire to raise children.

Yollada’s campaign platform is standard political fare: promises of a tourism drive, improved educational services for youth, support service for the elderly and a 24-hour emergency help line. The race, however, will be watched closely by transgender Thais wondering whether political power can be achieved by one of their own.

This week, Yollada took a break from campaigning to speak with GlobalPost about her stardom, her political aims and her home province’s view of transgender Thais.

GlobalPost: You’re campaigning in fairly conservative province. How have you been received on the campaign trail?

Yollada “Nok” Suanyot: I’ve received some great feedback. As for the other candidates, yes, they’ve highlighted the face that I’m of a different gender. They seem to think it’s a weakness. But as far as I can see, the people of Nan are believers in human rights. They examine my ability to develop the province more than my gender. I don’t even focus on gender in my campaign. I barely bring it up.

You’ve had a lot of high-profile jobs. What are you doing now?

I’m the manager of a TV station (a home shopping network called the “Jewelry Channel”) and I still run my jewelry business. I also do voiceovers for Discovery and
National Geographic.

Can you be taken seriously as a politician? Or are you seen as a showbiz star?

I was born and bred here in this small province. Developing it is my focus. Am I pretty? Am I a star? It doesn’t matter. Whether I’m a star or not doesn’t affect whether or not I can improve lives in this area.

Will you continue modeling and doing commercials if you’re elected?

I’ll probably be able to take jobs in my free time. I’m not just going to throw my career away. I’ll divide my time even if it’s scarce. But representing the people, not just in my province but all over Thailand, will be my first priority.

Are you satisfied with transgender rights under Thai law?

Good laws protecting transexuals have yet to come. We’re still on the fringe. Look at me. My role in society is that of a woman. But the law recognizes me as a man. That doesn’t make much sense, does it? Perhaps we now have greater acceptance in society. But not when it comes to legal rights.

How far would you push? For the right to raise a child?

Well, look, we barely have any rights at all at this point. Our genitalia is not recognized as female (even after surgery) so, if we’re jailed, we’re put in prison with the men. We can’t get proper health insurance. We can’t get married. We have problems traveling outside the country and trouble dealing with banks and government offices.

A question for foreigners: what would you like to be called? People hear words ranging from “ladyboy” to “transgender.” But they don’t know which
to use.

Most Thai people use the word “kathoey.” Is that bad?

But you once wrote a book called “Kathoey Kathoey,” right? (The 2007 book’s cover synopsis promises a tale of Yollada “faking it as a woman to snatch up crowns” in beauty pageants.)

That was my first book. And that was just an attractive headline. I’ve changed a lot since then.

Does your family support your campaign?

Yes, they still live here and they support everything I do.

Are you in a relationship now?

Nope. I’m single. (Laughs) You can go find someone for me if you want!

Do you think you’ll win?

I concede to having very little experience in politics. I’m getting all these positive responses but I don’t know if that will secure my victory. So I can’t answer that question just yet.

What will you do if you lose?

I have my career. And I’ll continue my work with the TransFemale Association of Thailand. I’ll keep volunteering and working as a representative of the people. So, no matter what, I feel like I won’t really lose anything.