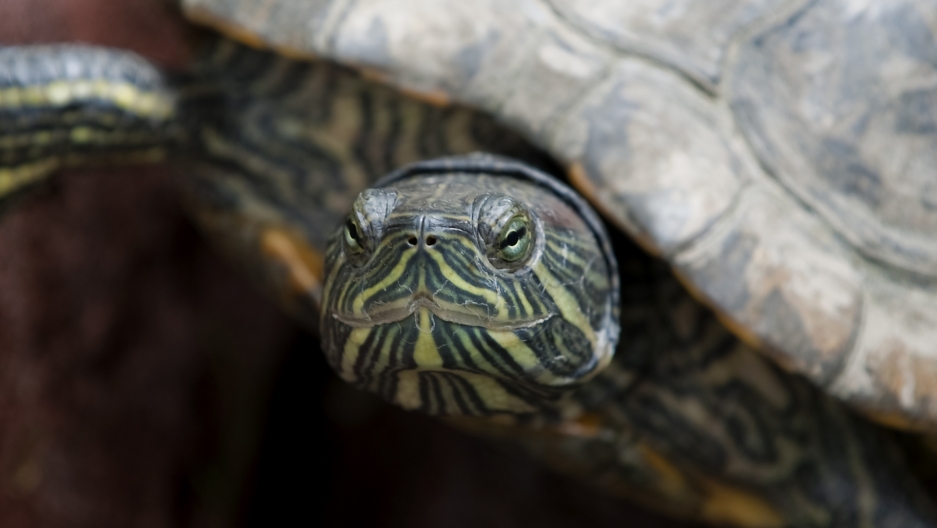 An elegant gigotea (Trachemys scripta elegans), or red-eared turtle, in a pound at the Museum of Archaeology in Mexico City. Mexico has a wealth of wildlife that needs protecting, but environmentalists claim the country's Green Party is not cut out for the job.
Credit: Luis Acosta
Share

That is according to the party’s many fierce critics, who include just about every serious environmentalist in Mexico.

“It is a family party, which buys votes and political positions, and distorts the environmental agenda,” Patricia Arendar, director of Greenpeace Mexico, told GlobalPost.

She added that the party’s policy proposals are inconsistent, short on detail, and fail to address urgent environmental issues facing Mexico. Those include deforestation, overfishing, toxic dumping and climate change.

But now, the Verdes Ecologistas appear poised to gain a spot among the world’s first green parties to take a role in national government.

The party failed to respond to GlobalPost’s requests for comment.

They usually garner less than 5 percent of the vote. But that support has helped the party’s alliance with the Institutional Revolutionary Party, or PRI, to the brink of the 50 percent mark in recent opinion polls for elections to the lower chamber of the national congress in July.

With PRI presidential candidate Enrique Peña Nieto reveling in a double-digit lead in the polls, there is a real chance that a Verde Ecologista could end up running Mexico’s department of environment and natural resources.

Never noted for its high level of environmental awareness, the PRI is the party that ruled Mexico for seven decades until 2000.

Although PRI politicians insist they have now cleaned up their act, most acknowledge that much of the party’s time in power was marred by massive corruption.

The Verdes Ecologistas, meanwhile, claim their goal is to support “sustainable development that allows human beings to freely live in a just society and in harmony with nature.”

More from GlobalPost: Hold the body shots, this prime tequila is for sipping

The party has only ever had two party leaders since its inception in 1986: founder Jorge Gonzalez Torres, a businessman and former PRI politician, and his telegenic, young son, Jorge Emilio Gonzalez, widely known here as “Niño Verde” — meaning “Green Boy.”

Last year, the party tossed the system of having a single head and instead established a leadership committee — a move Greenpeace Mexico and others say was intended to deflect the stigma of a series of scandals involving Jorge Emilio Gonzalez.

The misdeeds began in 2003 when Green Boy was caught on video being offered a $2 million bribe for dropping his opposition to the construction of a tourism complex on a nature reserve near Cancun.

His explanation, that no transaction actually took place and that he just wanted to see “what it [the proposal] was about,” convinced few.

As frequently happens with political scandals in Mexico, investigators failed to get to the bottom of the controversy and Green Boy re-emerged into the political mainstream a couple of years later.

Despite its modest following, the Verdes Ecologistas have long been Mexico’s fourth party. They are also the largest of the myriad of tiny political groupings sustained in part by lavish state funding for political parties here.

For the 2012 election campaign, Mexico’s Federal Electoral Institute has given the Verdes Ecologistas 156 million pesos ($11.4 million).

The state funding was originally intended to correct the imbalance created by the Institutional Revolutionary Party’s autocratic rule, in which it routinely used public resources for electoral purposes. But, critics say, the money has also led to numerous abuses.

Meanwhile, Jorge Emilio Gonzalez faces more unanswered questions about his own alleged wealth. Last year, accusations surfaced that Green Boy owned a luxury apartment, valued at $1.5 million in Cancun, after a 25-year-old Bulgarian woman fell to her death during a party there.

Reports by Mexican media then alleged that a total of 15 flats in the luxury complex were owned by Green Boy’s relatives and friends.

Jorge Emilio Gonzalez and his party largely maintained a low profile as the scandal unfolded, although he did say he felt “defamed” by the accusations. Authorities have so far failed to resolve the death.

As if that was not enough, European Greens have also cut their links with the Verdes Ecologistas over the latters’ support for the death penalty for murderers and kidnappers, a position seen to be utterly at odds with the global green movement’s humanist values.

Small wonder, then, that the Verdes Ecologistas have been the butt of withering attacks. Columnist Luciano Pascoe Rippey accused them of “ideological and practical cynicism, cheating the public purse, and … political piracy.”

Mexican politics are notorious for candidates’ ability to shake off the kind of allegations that would normally bury politicians in countries where the law is seen to apply equally to all.

Now, as the July elections loom, Mexico’s Green Party appears on the brink of adding a new chapter to that inglorious history.