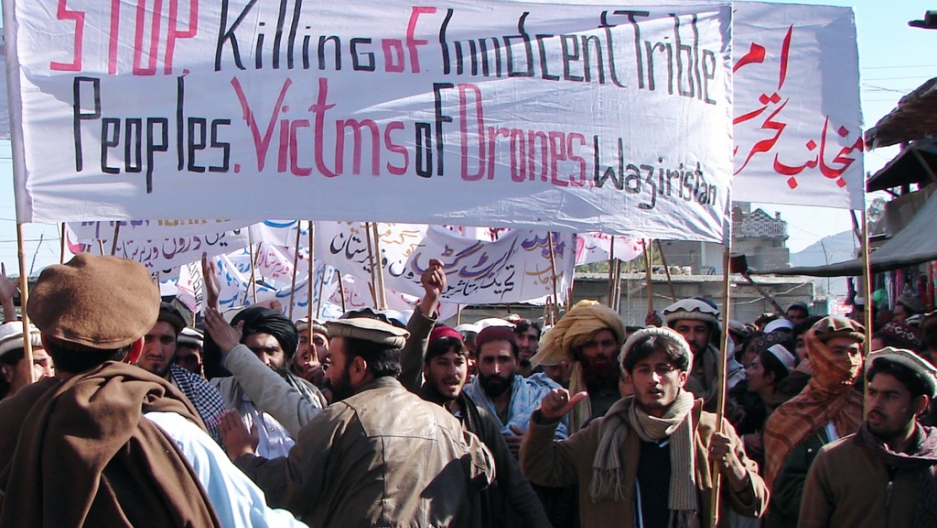 Pakistani tribesmen hold banners as they march during a protest rally against US drone attacks, in Miranshah, the main town in North Waziristan district on January 21, 2011. Hundreds of Pakistani tribesmen paraded in the streets to demand an end to US drone attacks which they said were killing innocent people in the tribal areas, witnesses said. In 2010 the campaign doubled missile attacks in the tribal area with around 100 drone strikes killing more than 650 people, according to an AFP tally.
Credit: THIR KHAN
Share

Drone strikes killed 4 militants in northwest Pakistan today, the third attack in four days by US forces against al Qaeda and Taliban factions.

The US drones launched two missiles that hit a bakery in Miran Shah, a central town in the North Waziristan tribal region, according to The Associated Press.

The body count couldn’t be immediately verified because locals were still searching through the rubble, the AP said.

The BBC reported those killed supported the Taliban, and the missiles hit a house in the early morning.

Al Qaeda and Taliban militants are known to use Miran Shah as a center of operations, a Voice of America report said.

The US and Pakistan are at odds over how to address al Qaeda and Taliban forces in the country.

According to Reuters, the US is trying to break up the Haqqani militant network in Afghanistan, which appears to be hiding in Pakistan.

Pakistan’s government wants drone strikes to stop because of civilian casualties and an attack in November that mistakenly killed 24 Pakistani soldiers.

NATO forces planning their withdrawal from Afghanistan in 2014 have requested those routes be reopened to ensure a safe and efficient departure.

More from GlobalPost: India-Pakistan: the King of Bad Times?