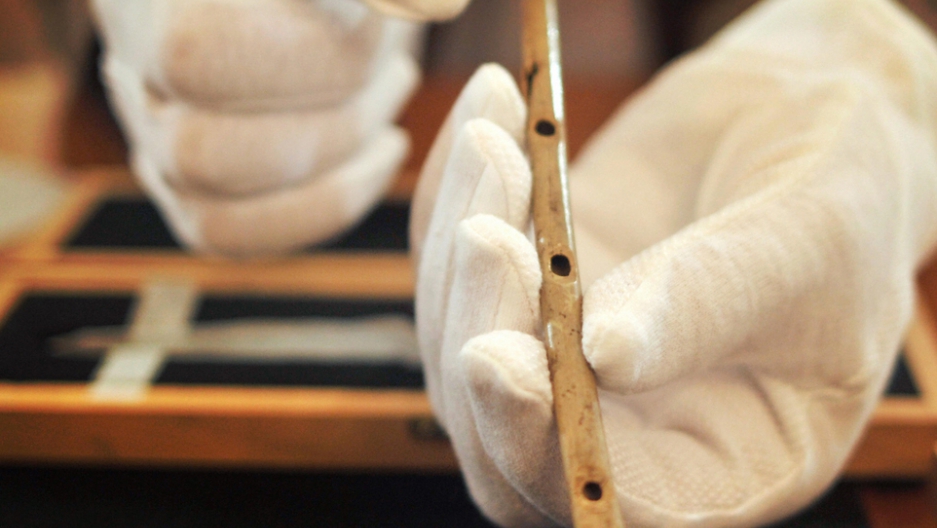 Prehistorian historian Nicholas Conard presents the bone flute from Hohle Fels to journalists on June 24, 2009 in the southern German city of Tuebingen. Excavations in the summer of 2008 at the sites of Hohle Fels and Vogelherd produced new evidence for Paleolithic music in the form of the remains of one nearly complete bone flute and isolated small fragments of three ivory flutes.
Credit: AFP
Share

The world's oldest-known instruments, flutes made of bird bone and mammoth ivory, have been discovered in a cave in Southern Germany, BBC News reported.

Scientists unearthed the instruments at Geissenkloesterle Cave in Germany, and used carbon dating to find that the flutes are between 42,000 and 43,000 years old, according to BBC News, tracing back to the Aurignacian culture from the upper Paleolithic period.

So far, these dates are the earliest for Aurignacian artifacts, even older than sites from Italy, France, England and other regions, LiveScience reported.

The researchers' findings are published in the Journal of Human Evolution.

More from GlobalPost: Tomb of female singer found in Egypt's Valley of the Kings

“High-resolution dating of this kind is essential for establishing a reliable chronology for testing ideas to help explain the expansion of modern humans into Europe, and the processes that led to the wide range of cultural innovations, including the advent of figurative art and music,” said Oxford University's Professor Tom Higham, the study's lead author, Sci-News reported.

These findings also suggests that modern humans entered the Upper Danube region before an extremely cold climatic phase around 39,000 to 40,000 years ago, according to Sci-News. Scientists had formerly believed that modern humans initially migrated up the Danube immediately after the cold period.

"These results are consistent with a hypothesis we made several years ago that the Danube River was a key corridor for the movement of humans and technological innovations into central Europe between 40,000-45,000 years ago," said Professor Nick Conard, the excavator at the dig site. Conard is a Tuebingen University researcher who in 2009 identified the previous record-holder for oldest instrument, according to the BBC.

The instruments are now the earliest record of technological and artistic innovations typical of the Aurignacian period's early modern humans, which came after Neanderthals, according to LiveScience, and may help scientists learn more about the interactions between the two.